I’ve not been very active either writing or reading blogs . . . here’s a bit about why.

First — sadly — Lawrence S. Ford passed away in mid-March (Lawrence Ford Obituary). He was Melisa’s dad and he passed away from complications from an unavoidable surgery. He was 96, and had been declining in health for a number of months before.

Aside from being with him for his last few days,  Melisa and her siblings were — and still are — involved in finalizing his affairs after his passing.

We held a memorial in early April, for which I made one of the boards recounting parts of his early life and the parts of his life he shared with us. 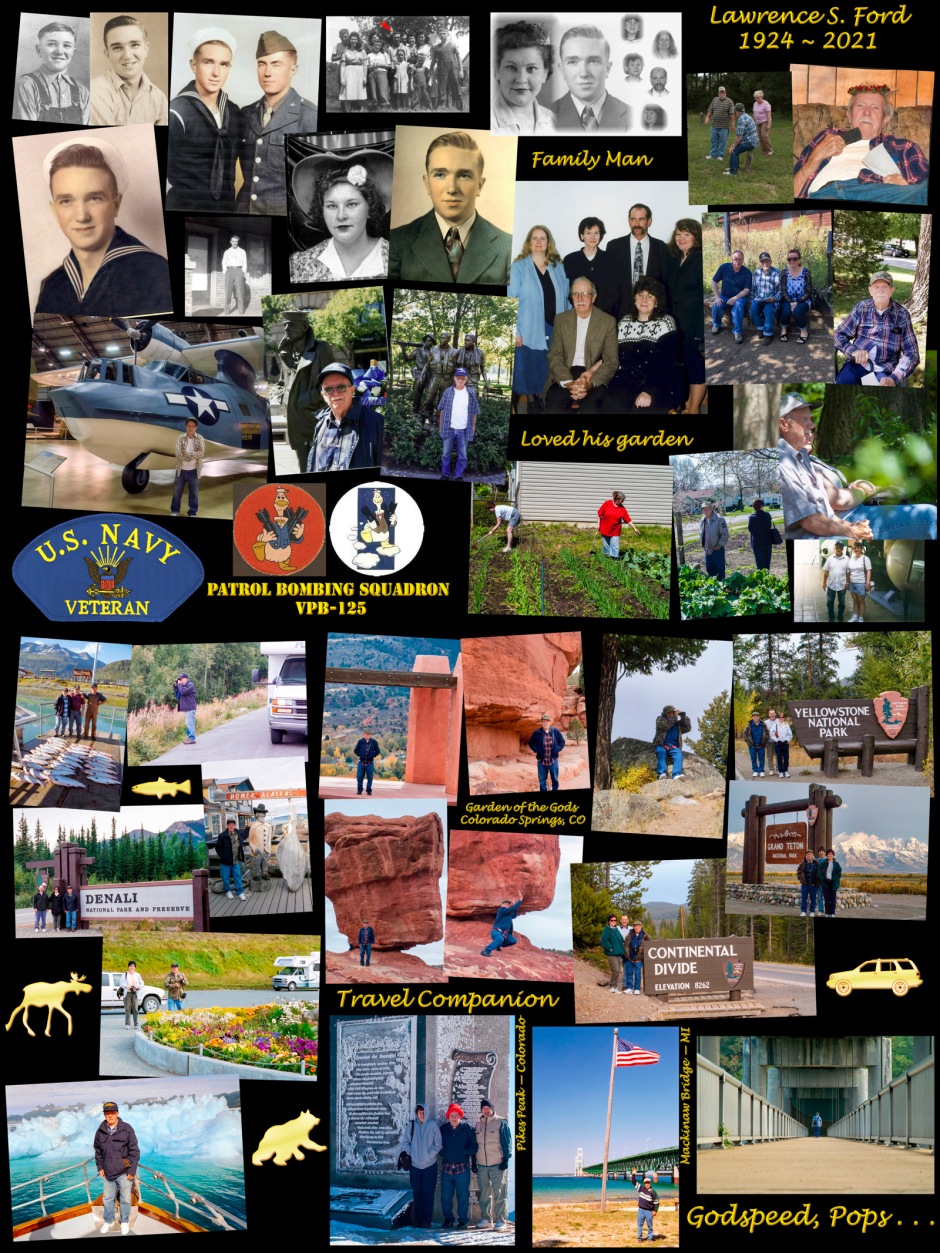 Others made boards exploring their time with him, his love of fishing and hunting, and his association with people whose lives he touched.

He taught me how to hunt squirrels, and how to fish for crappies and white bass. I gave up hunting and fishing once I had a business and employees occupying my time, but also my interests switched to golf and racquetball. In the 90s, our contact with ‘Pops’ — ‘Bus’, to his friends —was limited to a few visits from Michigan when it looked like we could get away for a bit.

After his wife died (1999) we went on some great trips with him. A generous fellow who asked for nothing in return, he was also a heck of a travel companion, glad to be coming along and patient with whatever we wanted to do and the exact opposite of a bother. He also traveled with us when — in 2004 — we headed West on a Roadtrip of Discovery (which eventually led us to live in Colorado for 11 years).

Our only complaint might be that it was tough to get him to say what he wanted to do . . . “Whatever you-uns want to do” was his standard answer. His other standard answer was “I’m fine” . . . even when he wasn’t. I can’t say I remember any times when I heard him complain about his situation or life.

A low-maintenance guest and travel buddy, he would often regale us with stories of his travels while in the Navy and after, as well as recounting his hunting and trapping exploits, like the time he caught a huge 300 pound beaver (yes, the beaver grew along with Pop’s age).

He was a raconteur, and while sometimes the stories might have been a bit embellished, he had a prodigious memory for places and events. At 96, he was still sharp, had a good sense of humor, and enjoyed his fried fish whenever he could get it (once he could no longer fish, his fishing buddies would bring him fresh fish).

He was still mowing his lawn and maintaining his large garden in his early 90s and it was only in the last few years that his mobility was affected and he started to slow down . . . but he was adamant about not wanting help or to be put in a home. And he still insisted on going to his weekly poker game with his friends who, after he could no longer drive, would pick him up and bring him back (although COVID put a crimp on that).

He lived his life the way he wanted, and he is missed.

So, that explains some of the delays in the Alphabet Challenge story-writing and reporting. What else? Well, coincidentally, a long-delayed project got going in the midst of all this.

This next photo is from the listing of the house we eventually bought and now inhabit.

Notice the dining room in the background, bounded by three white columns . . . well, we have no use for a dining room, but we do have use for an enclosed office.

This is how the room looked after we purchased the house. No, we didn’t repaint; the listing photo was brightened quite a bit, especially considering all the lighting when we bought the house had very warm (and dim) bulbs (one of the first changes we made after moving in). The color you see on the wall is pretty accurate of what was there, but maybe a bit more “burnt”.

Using that picture, I sketched up what we wanted . . .

It’s a poor rendering, but it gives you an idea of the intent. We quoted it, and were planning for it in 2020 . . . you know, the COVID year. By the way, Melisa would probably want me to mention those curtains were left by the previous owners (you can see the ones she made in later photos).

So, though late 2019 and 2020, we redid closets, and repainted pretty much most of the house, including the area in question . . .

That color is also not well-represented because of the lighting. If anyone is interested, it’s Home Depot’s Behr paint, and the color is “Baja”. 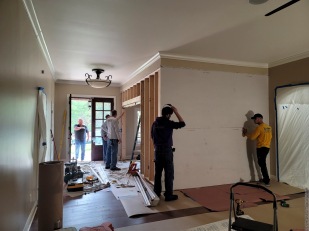 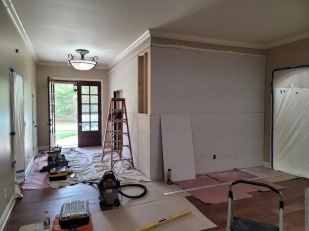 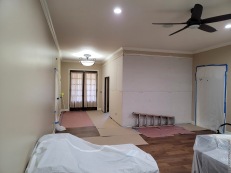 After they finished with the framing and drywall, I did the painting.

I also painted the trim, and they then came back to install it. The dual pocket doors are on order, and I’ll paint them when they get here, and they’ll install them. Our original plan was barn doors, thinking it allows more usable space as opposed to swinging doors, but pocket doors also allow more usable wall space. Besides, the doors will hardly ever be closed . . . 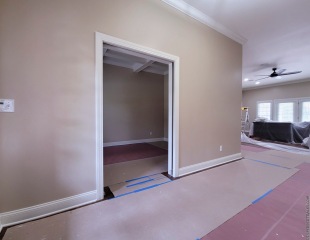 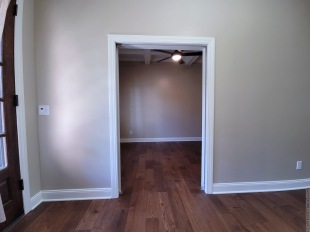 Finally, today, we cleaned everything up, moved the furniture back, and . . . 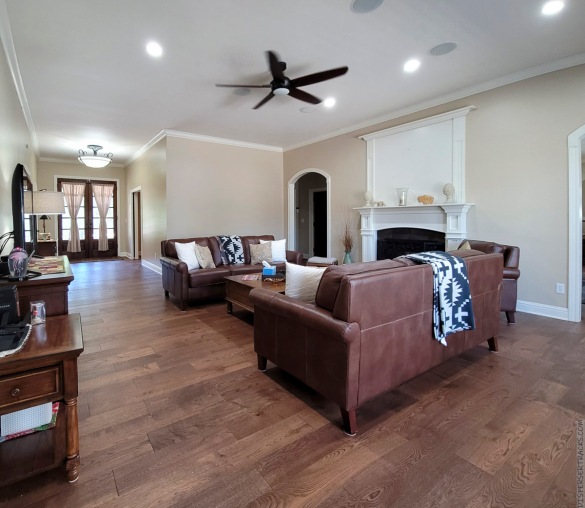 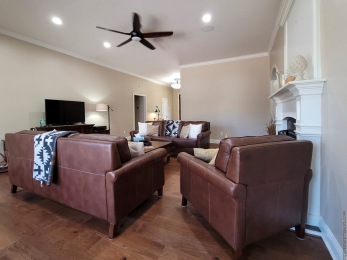 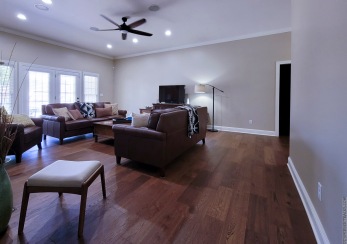 We now have a proper foyer and I have an office. Mind you, we still need more furniture, but we can now start exploring what we want by way of decorating (floor and walls). Maybe I can see if I have any photos . . .

I’m still researching what kind of office furniture I want (I’ve yet to see something I like). I’m also replacing my 9-year-old computer with a modern screamer, and that too took a fair amount of time and research, trying to match it both to my current and future needs.

Side note: my 2012 computer still works pretty well, but with all the AI-powered software, it now takes minutes to process each photo, and when you’re dealing with as many photos as I do, it’s at a point where I find myself avoiding processing unless I have a serious block of time on my hands (some might have noticed I tend to post many photos in my posts . . . and that — lately — they’ve been fewer of them). For the record, my current computer doesn’t even match the minimum requirements for most of the software I own, but I still manage to get things done — a testament to the machine’s quality and configuration.

Still, 9-years-old . . . that’s like 135 in computer years. But, the main reason for the upgrade was watching prices rise due to increased demand and the chip shortage. I figured I’d better not wait for my current machine to crap out on me since the lead time for getting one is approaching 6+ weeks.

. . . and speaking of the garage, that’s my next project, likely beginning this weekend; painting and organizing the garage, and adding shelves and pegboards for hanging up stuff.

Oh, and I promised Melisa I’d get the main closet done (the last of the closets needing a make-over) after I get done with the garage. After that, the laundry room, and that will be it for now.

So, yes, a bit busy. Plus, I still have to write about “Lust” for the Seven Deadly Sins Challenge.

Speaking of which, we’re close to settling on a logo for the stories . . .

Thank you Perry for the great effort in capturing the theme of the challenge.