For them not interested in reading, you can see the photos in THIS<<link SmugMug Gallery.

If you want the full experience, keep reading.

So, more delays to the Deadly Sins Challenge. One of the writers had technical (software) issues, and the other writer is writing a novella covering all seven sins and needs to split out Lust into a stand-alone story. At least that’s my understanding of it.

They messed me up a bit, so if my story sucks, blame them. You see, I do my best writing under pressure; pressure of a looming deadline. So on the 13th, I buckled down and wrote nearly half of the story that was due on the 14th. But before I finished, I heard Perry and Gary we not going to meet the deadline . . . and I lost all my inspiration, drive, and desire to write.

Wednesday, the 19th, they said . . . but, you know me; fool me once, shame on me, fool me twice, sorry, no can do. I didn’t even think about writing until Wednesday, and good thing too because they told me they’d have it done by Friday.

Came late Friday, I looked at the story again, hoping for deadline-induced adrenaline to kick me into overdrive . . . and nothing happened. So, Saturday, the supposed day of publication, I scrambled to do all my chores and finish the story . . . only to be told we’re now looking at possibly next week.

So, there you have it . . . if my story sucks, it’s not my fault because they kept changing the deadline. In fact, this is the first time I’m a week ahead of the deadline, so this story will likely be a major suck-fest thanks to the Broxson Twins.

But, what was I doing while not writing? I can’t tell you everything, but on the 14th, I snapped photos of birds. Among them, Purple Martins (LINK).

The Purple Martin Condo in the first photo is my neighbor’s, and I have a good view of it from my back patio.

I had considered putting one up, but then I looked into how much work it is to properly maintain it (LINK) . . . and decided not to. It will be interesting to see if my neighbors will follow through in cleaning the house after each season. It looks all nice right now, but I feat it might suffer the same fate as other houses I see around; uncleaned, unused, and becoming an eyesore. Let’s hope not.

Anyway, that was the first day I noticed birds checking it out. There were a number of females flying around it and going in and out, scoping out the place.

Those are two of the four females that were flying around it. I could be wrong, but — to me — it appeared as if they were practicing approaches. Meaning,  they would swoop in, do their hovering bit as if they were going to land, and then abort at the last second.

Swallows — Purple Martins are in the same family — are swift fliers, so them slowing down and nearly hovering next to the house made it easier to photograph them in flight. Although, looking back at the gallery at the beginning, I’m regaining my photographing-flying-birds skill.

This next bird is practicing for the rings by doing an Iron Cross.

By the way, most of these photos — but not all — are cropped pretty close to 1:1. Considering I was shooting from about 90 feet away, not too shabby.

After the females checked things out, a lone male stopped by to see what’s what.

That’s him on the right, and here he checking out the view after inspecting the inside . . .

By the way, there were other swallows buzzing the pole-mounted house. At first, I thought they were Tree Swallows . . . but, no; they were Barn Swallows. Now, those guys were really zipping around. This is the only decent photo I got of one, and it’s not all that good.

In contrast, here are three shots of the Purple Martin females also flying around . . .

As far as I can tell, only one pair has so far moved in, although it’s difficult to tell because I don’t exactly see where they go in once they land . . . and they all look alike.

To be clear, there were other birds that came to check the place out . . . .

By the way, if those last two photos look different, it’s because they were processed in DxO PhotoLab and had some processing that I didn’t do on the previous photos. .

In case anyone is wondering, the faint and out-of-focus yellow things are reeds from a clump of dead ornamental grass on my neighbor’s lot. They’ve since cleared it, but it will grow again and — by late Summer — likely obscure the Purple Martin house. No worries; it will still be visible if I move a few feet to the right of my patio.

Before I move on to other birds, here’s a parting shot of the Purple Martin male ignoring me.

I know you’re asking yourself what other wondrous and exotic birds I’m talking about . . .

I also got me a few more shots of hummingbirds . . . well, a hummingbird. I’ve seen a few, but not too many, and while this is still early, I wonder if I’ll have as many as I did last year. I wonder because we cut down a few trees and removed some bushes, so it’s a lot more open than it used to be.

This is the best shot of the ones I managed to get (from quite a distance) . . .

The other shots aren’t that good, but I’ll share them for them starved for hummingbird photos.

Here’s a poor shot of a Northern Cardinal (LINK). . . they’ve been scarce lately, likely because with all the Grackles running around, it’s nearly impossible for them to raise a successful litter. I think they had a nest in the neighbor’s tree, and the other day I saw it on the ground, likely raided by other birds.

So, I’m going to show another Grackle . . . but of interest to me is what it’s holding in its beak. I’ve seen a number of Grackles with similar bugs (I presume it’s a bug) flying to their nests (presumably, to feed their young).

They seem to pluck those from the ground, and it kind-of looks like some sort of spider . . . or not. It’s pretty large, and I can’t believe that I wouldn’t notice something that large moving around in the grass.

I’ve not been able to get a clear photo of the things (these are the best I got). It almost looks as if it has wings. A young Praying Mantis, perhaps? If it’s a spider, it’s pretty big.

Anyone with a clue is welcome to leave comments below.

Of course, they also catch worms and what looks like caterpillars (something else I’ve yet to see on the premises).

By the way, Grackles would make lousy Ninjas . . . they don’t blend in at all! 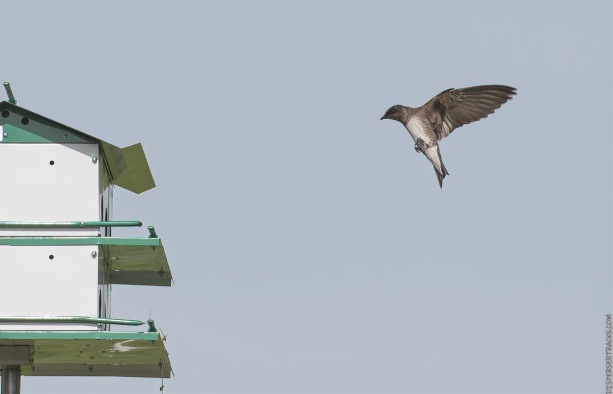 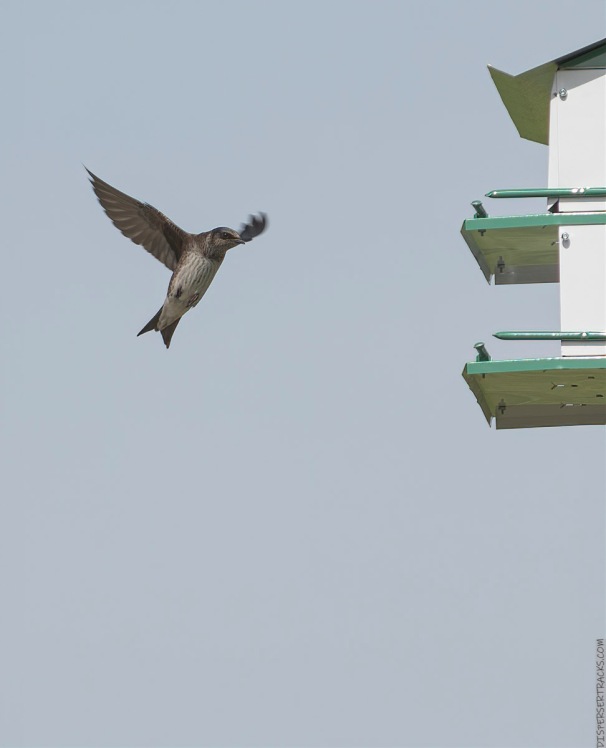 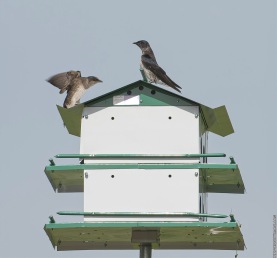 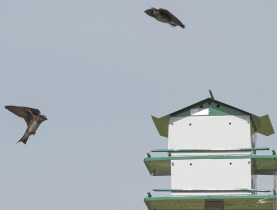 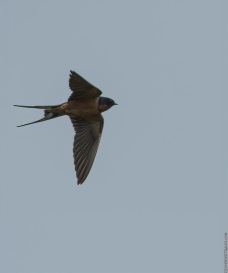 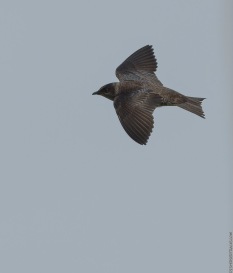 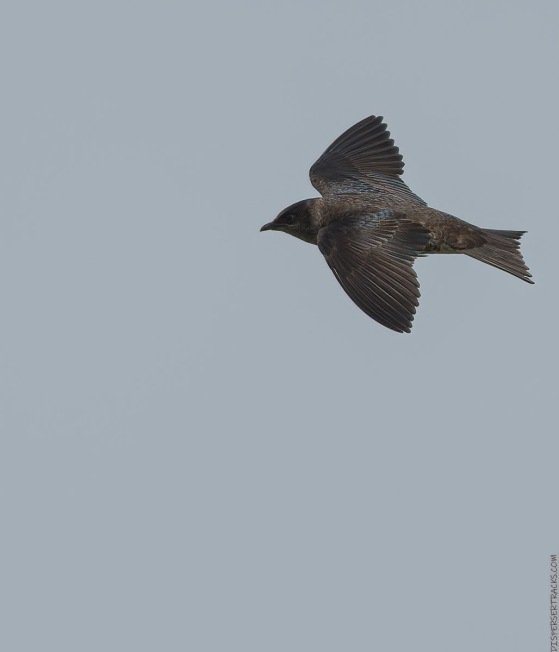 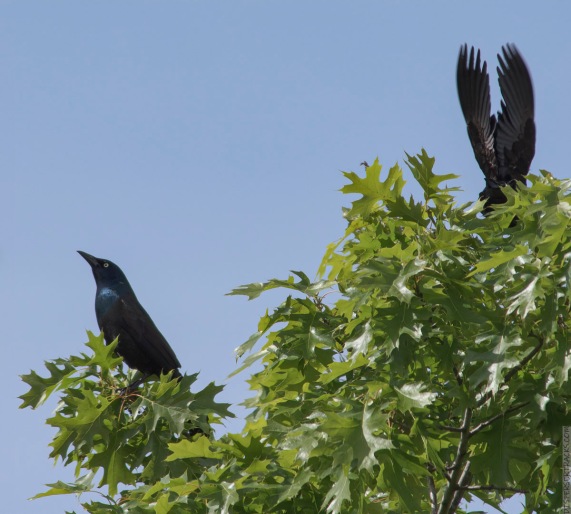 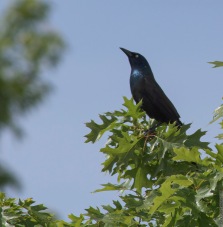 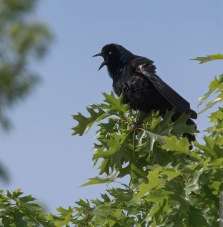 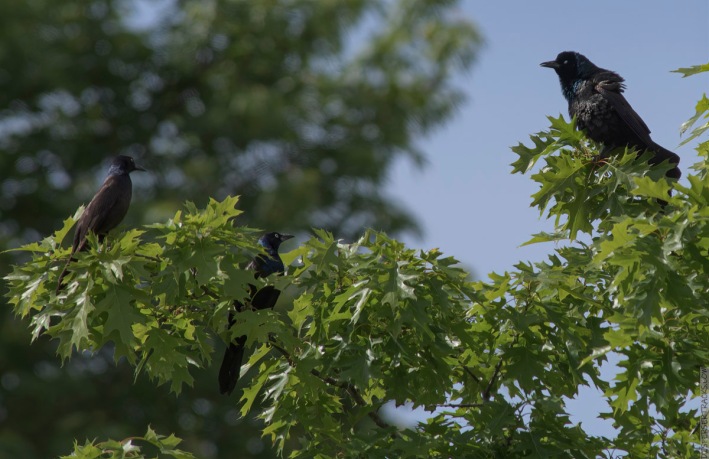 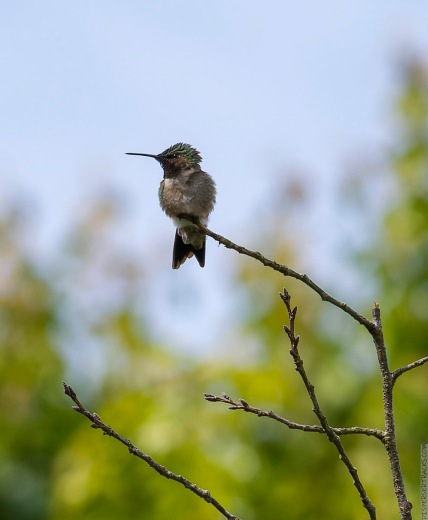 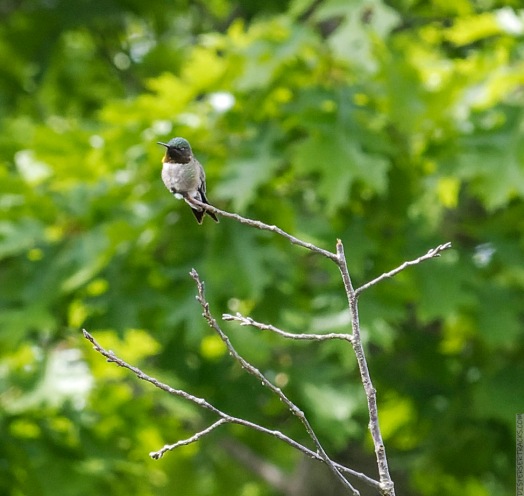 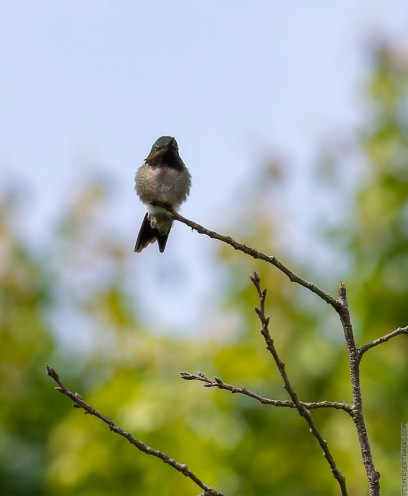 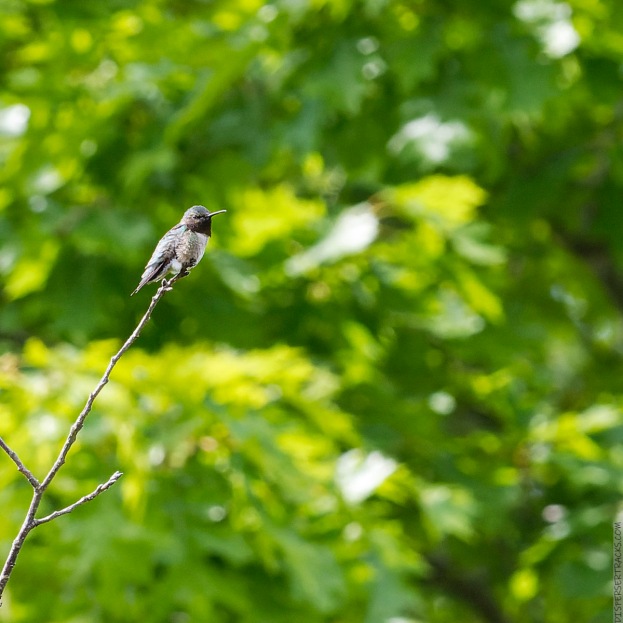 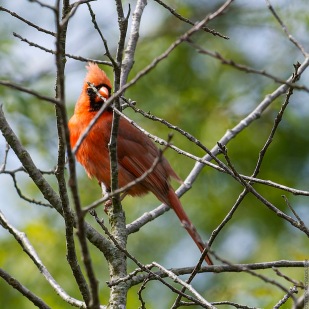 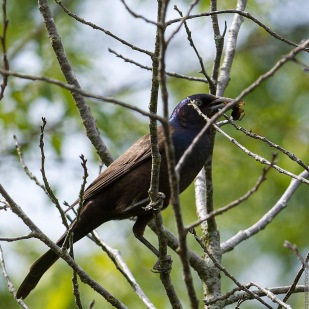 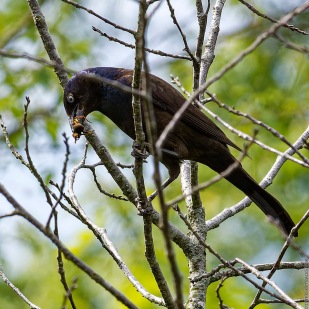 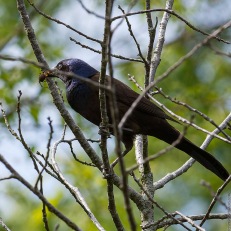 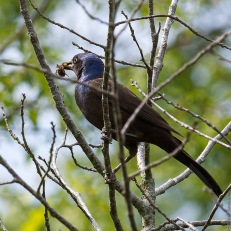 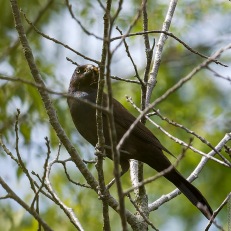