So, landscapes. I like landscape photography, but I’m rarely happy with my results. I can almost hear a few people start to argue . . .

“Oh, Great Disperser. Thou should not sell yourself short for all you do is pretty good!”

Well, yeah, but it turns out “pretty good” is a far cry from “good” and lightyears behind “great“.

Don’t believe me? Take a look at these samples (LINK). Now, for comparison, look at a few of my landscapes (LINK). That’s the difference between ‘pretty good’ and ‘great’.

There is no shortage of sites sharing all manner of rules for snapping great landscape photos (LINK) . . . and I know them rules; so well that I know which to violate.

I follow some of the rules just out of habit, like, for instance, using the Rule of Thirds. 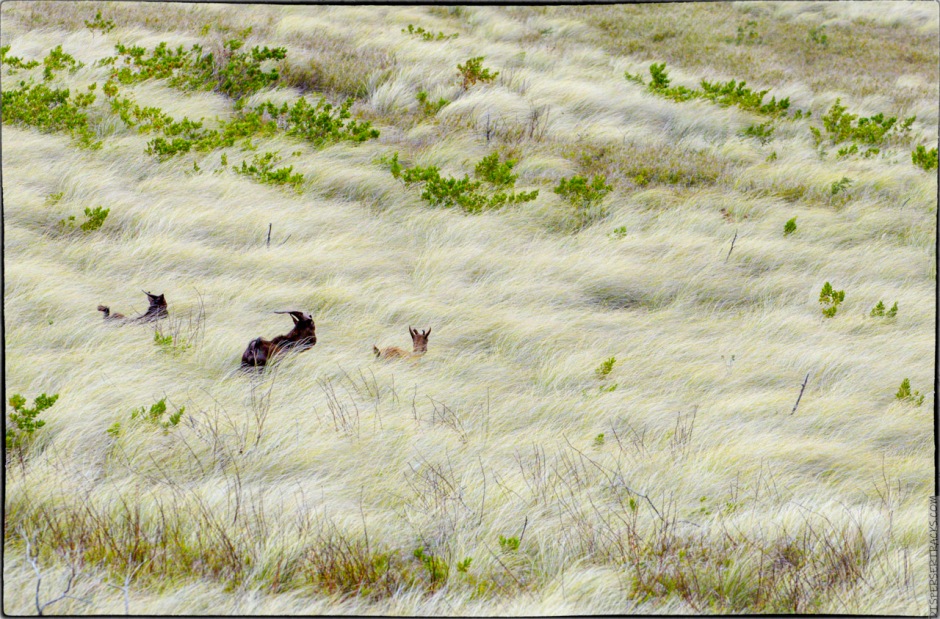 The RoT refers to placing the subject at one of the intersections of imaginary lines dividing the photos into thirds vertically and into thirds horizontally (explained in this LINK). If intrepid, you could also read about the Golden Ratio and Fibonacci’s swirl.

The above photo also incorporates a rule about giving animals “space” ahead of them. What does that mean? Exactly what it sounds (and looks) like; the animals have empty space ahead of them, in the direction they are facing/traveling. But, that’s more a rule about photographing animals than landscapes . . . unless animals are a part of the landscape.

What? You want an example? Well, this is a post about landscapes, but, OK . . . here’s a gallery of the original photo and two different crops. Which looks better to you? 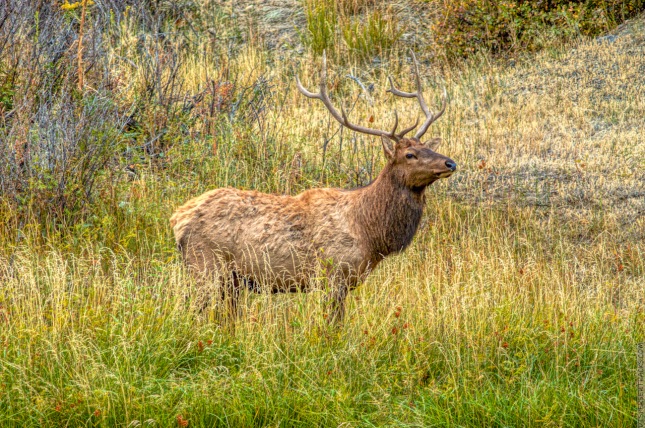 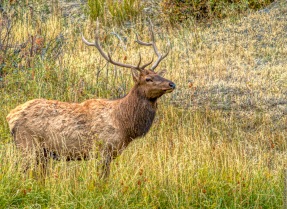 That’s right; none of them because the image is a little soft.

Anyway, some of the other rules (depending on who you read) are as follows: use leading lines, strong foreground elements (not always), and impressive sky (although a big blue sky can still look good).

Some of these cross into composition rules for any type of photo, but the point is that landscape shots can look vary significantly depending on the framing choices (see if you can recognize some of these elements in the amazing landscape photos I linked above; the ones that aren’t mine). You can also read a previous post I did on cropping and post-processing photos (LINK).

While we’re on the subject of post-processing, notice how the great photos of landscapes all have rich (but well-balanced) colors. Amazing, they are. Remember where I said I don’t shoot during the golden hour? (Golden Hour is a misnomer because there’s more than one; the name actually refers to early morning, and late afternoon light — LINK)

It’s difficult getting those contrasts, rich tones, and impressive shadows when shooting in the middle of the day (which is my typical shooting time). Photographers — serious photographers; photographers who are not me — will plan their shoots for when the light is optimal, arrive early, stay late, and then dodge and burn the photo by hand, use multiple exposures, and . . . well, you get the idea.

Let’s look at that photo for a moment because it incorporates some of the points I mentioned. The sky is interesting (dramatic, even). There is a strong foreground element (the wave). There are two leading lines (not just one) . . . both the line of the wave and the horizon point your eyes to the tree on the right side of the frame. You could argue the yellow portion of the sky is yet another line to the tree.

(Hole crap on a cracker! Look at me talking as if I’m an authority on the subject. Let me tell you this: nothing could be further than the truth.)

Here’s the funny thing about that photo. I framed it without thinking about it. Heck, you can even argue the water takes up two-thirds of the bottom view, and thus the photo satisfies the Rule of Thirds.

Oh, I forgot another crucial thing about landscapes; if your horizon is a line, make sure it’s level. Horizons — barring mountains, trees, or buildings — generally are straight lines and should be presented as such. No, the original is not level. For whatever reason, my photos — all my photos — have a slight tilt which I correct before posting them . . . must be the cameras I use.

Of course, the colors are bold because it’s a sunset. That’s one thing I can do pretty well (LINK) . . . because sunsets are easy.

Here’s another landscape (without the bold colors because it was the middle of the day) . . .

Yes, that’s a panorama composed of nine photos stitched together. Would you believe I have a post on panoramas? (LINK)

If you click on the photo, you’ll get a 1280-pixels-wide photo or roughly twice the size of the above. So, here’s the thing with panoramic shots like the one above. They are not impressive as presented and only marginally improved if you get the larger version by clicking on them.

That’s because the shot’s proportions are such that you don’t see much unless you go to a full-size view, or, at least much larger than the above. That’s because the height isn’t providing enough balance (subconsciously) to the width. (that’s my crap explanation and I’m sticking to it)

Regardless of which version of the above you look at, you can see lines at work . . . the horizon sweeps from right to left and up, as does the remnant of the tree trunk, as do the clouds. And, yes, there’s a strong foreground element (the pieces of wood and rocks).

Did I plan this? Not consciously, but, when I drove by it, I knew I wanted to photograph it and knew I would make a panorama out of the nine photos. Afterward — like, as I’m writing this — I can recognize the reason(s) why I photographed the scene, why the photo works, and even talk about them as if I knew what the fu . . . er . . . fudge I’m talking about.

Very briefly about panoramas . . . I mention the above is not impressive because of the size (specifically, the size of the short dimension) . . . but, take a vertical panorama and you now have more width to play with and you have lots of vertical space to show it on the blog . . .

If you compare the two photos, the big difference is that while they’re roughly the same size as far as the longest dimension, the shortest dimension is much larger in the canyon photo (almost twice as large), allowing you to see more details even without going to the full-size photo.

Let me show you another example. Here is another panorama landscape stitched together (ten photos).

Now, compare that to this photo, also a stitched panorama (eleven photos), of the same scene. This panorama is composed of photos taken in portrait mode, capturing more height. (NB: the processing is slightly different, which is actually a negative because it’s not as vibrant.)

If you click on that photo, despite it being the same width as the other one, you can see more.

But, it’s a trick; both panoramas are shot from the same location and using the same lens and camera setting (70mm zoom). You can click on this LINK to see the full-size version of the above (15,500×5,300 pixels, 11MB). You could argue the crop is not the same, but, while true, there’s no denying there’s more height (more foreground and sky) captured in portrait mode.

Well, Bob, it isn’t . . . unless you have a phone and take photos and remember it has a panorama function and that you might one day say “Hey! I can take a panorama!” . . . but, I’d advise you to practice it before you actually need to.

Hint for newbies: taking panoramas with either a phone or a point-and-shoot has been made easier, but it’s not foolproof (not even close). You can easily smear portions of the photos if you go too fast or too slow. If you’re planning on ever using the panorama function, learn its quirks. Another method is to do what I did above; snap photos of the scene (overlapping each photo by at least 1/4 to 1/3) and then stitch them together (there are free online sites that will do it for you, but perhaps you should invest in even a cheap photo processor if you intend to do anything with photos at all).

So, back to landscape photos . . . the two panoramic shots offer visual impact because of their size. Also, because of the scene. They don’t, however, offer up the vibrance of the examples you can see from an Internet search.

To recap, I seldom go out early or stay out late (something about vampires and goblins that I don’t want to explain right now), so what am I to do when confronted with a scene I like and it’s not the so-called Golden Hour?

OK, even the most stalwart readers might want to throw in the towel, but here goes nothing . . .

That photo was shot a few hours before sunset on my Big Island’s favorite road, the old Saddle Road. The photo right out of the camera doesn’t do it justice and that’s on purpose. That was shot with as little processing as the camera allows. Had I let the camera process it, it would have more punch, but I don’t because I like to process my photos my way. Yes, yes, being a raw file, I could let the camera do its things, and then walk it back. Well, I don’t.

Instead, I rely on my idealized memory of the scene to recreate what I saw . . . 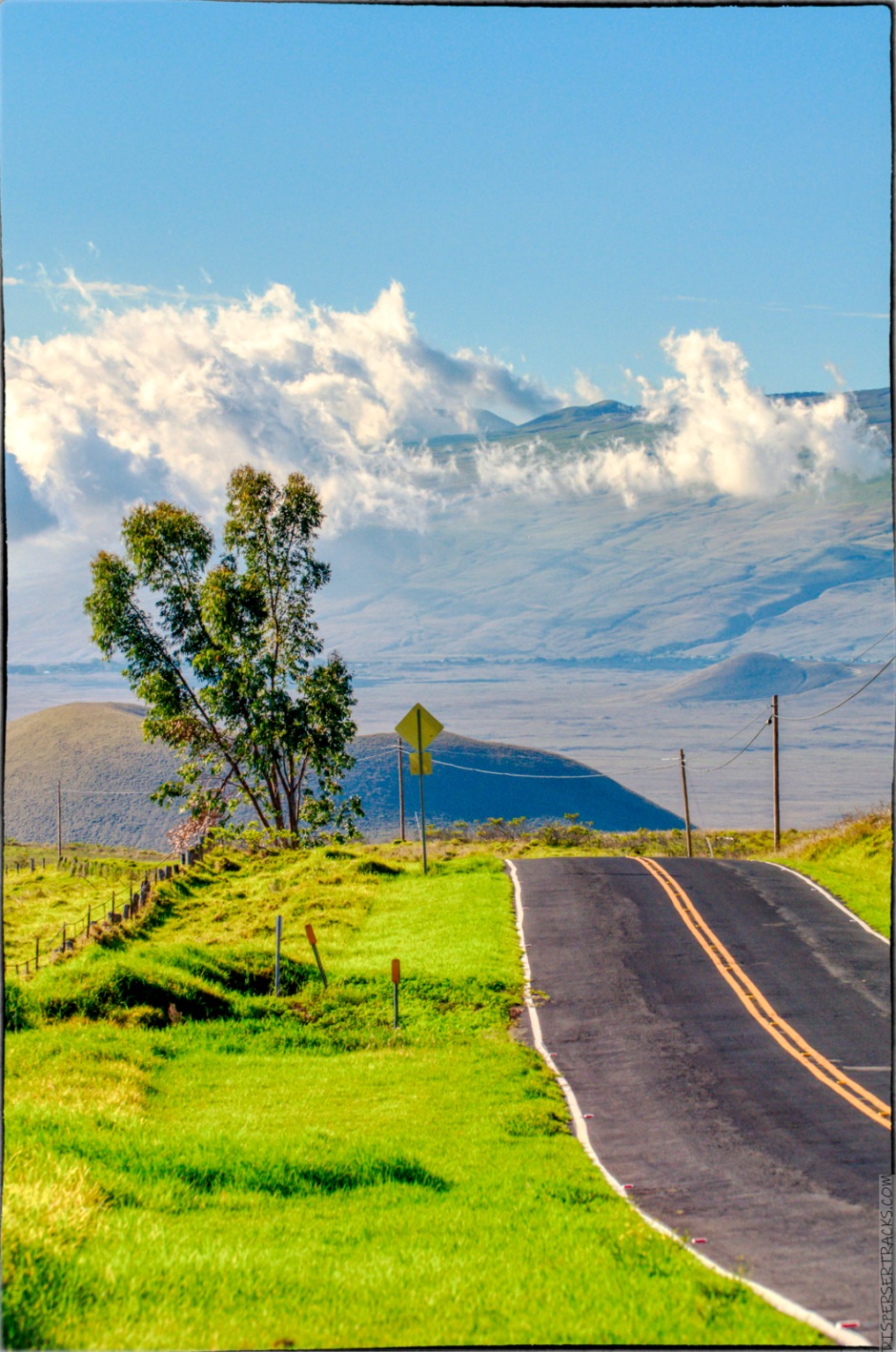 Is that pretty good? Well, I like it, but I have actual memories and experiences to tie to it. Come in cold from some other Internet site, and not only because it holds little emotional impact, but also minimal visual impact, it’s maybe worth a casual “Meh!” but no more.

Could I turn a mid-afternoon photo into a Golden Hour photo? I’m sure there are photographers who can (dodging, burning, masking, and all the stuff Ansel Adams used to do) but masking stuff takes a lot of time.

Sliders, on the other hand, offer quick adjustments. I give you, a pseudo-Golden Hour landscape! 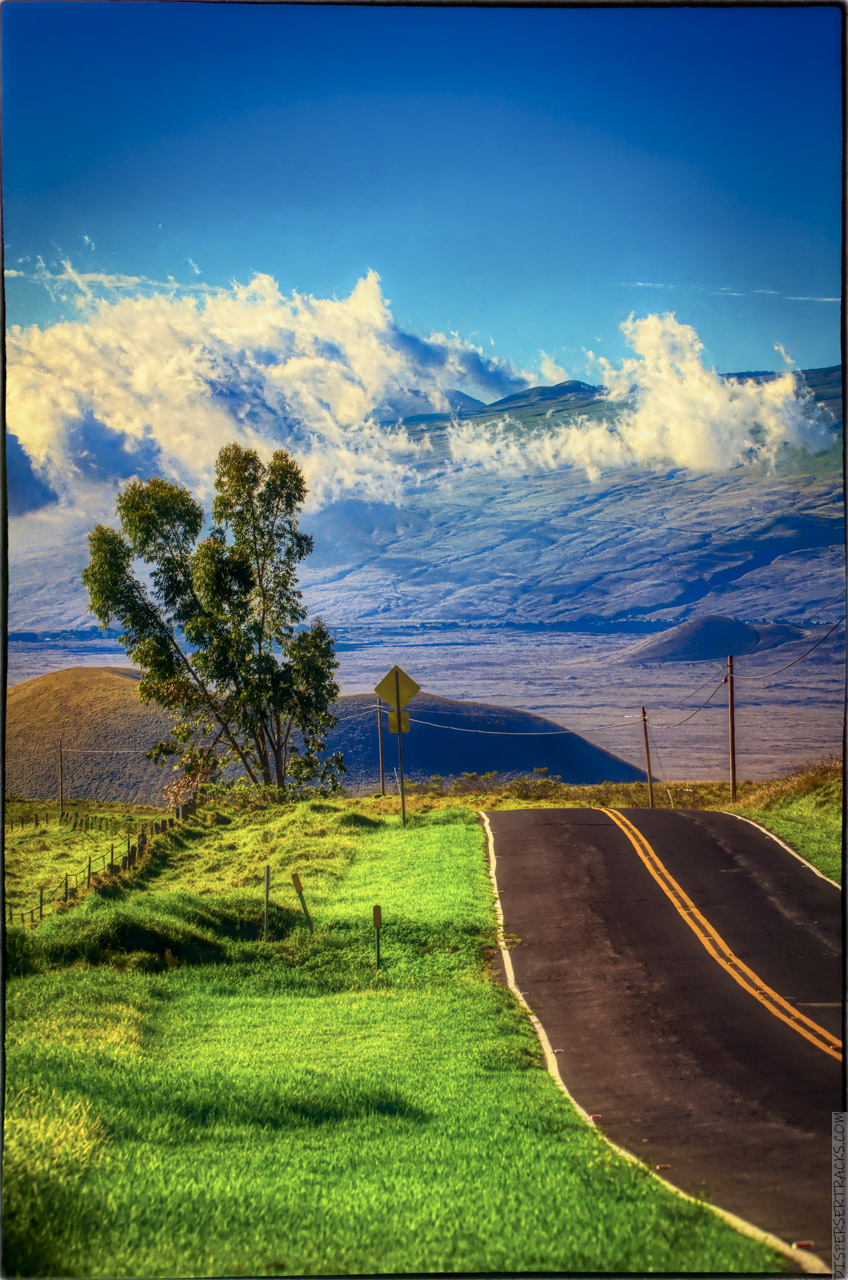 I can’t tell which one is closest to a prize-winning pseudo-Golden Hour photo. OK, OK . . . none of them.

Hey! What about monochrome?! 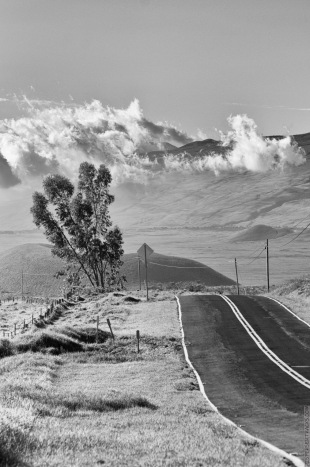 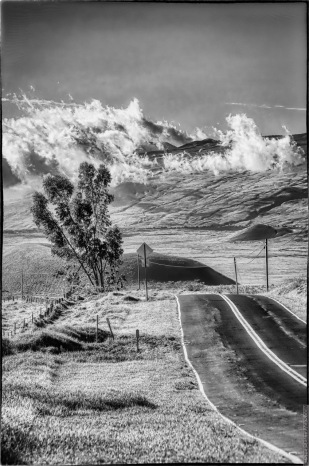 You know what? Let me also do my usual conversion to artistic masterpieces. Here’s a gallery of the above plus some conversions. Yes, that’s the signal that we’re about to close this post. 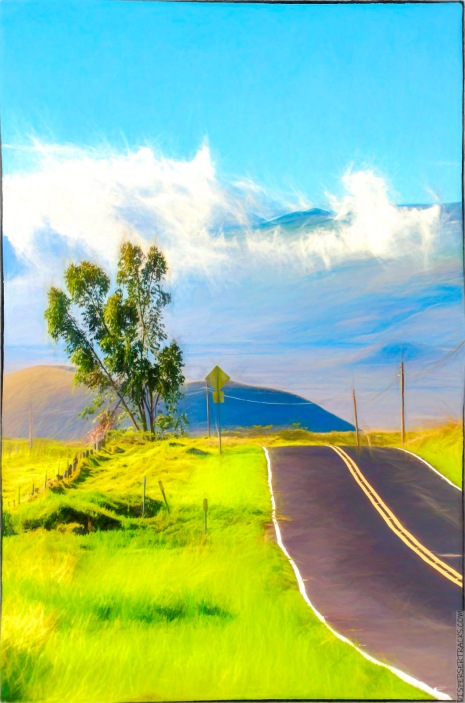 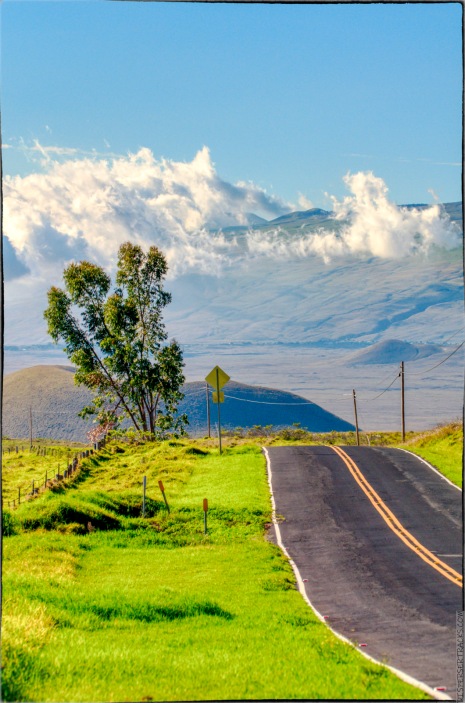