As the note says, the bird — likely a Red-tailed hawk — is in the original photo. The sky wasn’t . . . that’s one of Luminar 4’s Dramatic Skies.

That’s something I always do . . . if I modify the content of a photo, I let readers know.

Anyway, that’s another D200 photo from 2010 . . . that photo was taken a few days before I started this blog. As of today — depending on where I read — I have somewhere between 1670 and 1825 followers. That’s right; WP gives different numbers depending on where one looks.

Well, Bob, not really. The vast majority — 98.86% — don’t interact beyond throwing an initial “like”, subscribing, and never be heard from again. My estimate is I have about ten to twenty regular readers, and of those, only about six to eight (depending on what’s going on in their lives) interact.

I’ve always interpreted that particular rock formation as a buffalo . . . but people say it looks like a goat. I say people be wrong.

Anyway, followers tend to fall into a few different categories. The most numerous are businesses (people wanting to sell you stuff).

They’ll “like” anywhere from three to seven posts in quick succession and then subscribe. I’ll never hear from them again because their aim is to spread a link to their blog in — I presume — the hope me or one of my readers will click on their link. They are annoying, but since I don’t even bother looking at anyone who doesn’t comment, it’s not a big deal.

There are businesses who will comment . . . something banal and generic and often out of sync to the content. Again, they get ignored, although I’m occasionally moved to post a snarky reply.

Some bloggers initially engage, but then — once they lure you to their blog — revert to the occasional “like” and little-to-no-interaction.

Look, I get it . . . interactions take time. Beyond that, they have to be rewarding. So many aren’t.

Those annoying comments I’ve left? Sometimes I follow a blog and over time the content becomes annoying. Maybe it was annoying all along and I just lose patience with it. Whatever the case, if I don’t pay attention to how I feel and I don’t evaluate my response to the material, my annoyance spills over into my comments. I’m better than I was, but it can still happen.

Then again, I always feel weird unsubscribing without at least letting the blogger know why I’m no longer interested . . . but, realistically, it’s always a bad idea. No one takes negative feedback as an opportunity to learn.

. . . anyway, I should just unsubscribe the moment I get annoyed. I’m getting better at that.

I have mixed feelings about initials carved or scribbled in public places. On the one hand, I’m mildly curious about the history of the people behind the initials; are they still together? What did they use to carve the initials? Why weren’t words to each other sufficient? Was a promise to each other — or a declaration of love — considered less substantial than carving initials?

On the other hand, while one could say the initials add a certain interest, I don’t like the defacing rocks, trees, and whatnot.

I always imagine it’s young people leaving these permanent records of what are likely transient relationships. I could be wrong. It could be some adults also feel the need to immortalize their mistakes. Maybe they hope that immortalizing their initials will make their feelings last.

Anyway, this exercise in free-writing has come to an end.

This LINK will take you to the SmugMug gallery that has the full-size versions of the above and also photos from recent reminder posts.

I’ll close this update with a gallery of the above . . .

There are a couple of “faces” one can see here depending on what one considers an eye. 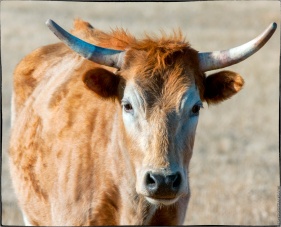 I definitively see the semblance of a cow . . . can you see it?