The “U” stories voting block is off to a non-roaring start. Odd that, as I’d have thought Thanksgiving week would be the one to fall light in readership and voting.

But, no . . . it falls on the “U” stories to rein in the head of voting steam from the last few voting blocks. It’s OK . . . heck, early on we had voting rounds barely breaking into the teens (as far as votes are concerned). Of course, we all know what this means . . . the “V” block better offer up amazing stuff so that we might recapture our audience.

Yesterday, I posted a few photos from a Still Life contest I had entered. No, I did not win and you can probably see why . . .

The thing is, I presented them as photos. I should have done paintings. Everything looks better in paintings. Well, nearly everything.

For them unfamiliar with those, let me tell you a story . . . I like Red Rose Tea, and — years back — a porcelain figurine used to come in each of the boxes you bought. “Used to” is the operating word. The above photo shows a small part of the collection I used to have (I drank a lot of tea throughout the years — with lemon and sugar if anyone wants to know). Those and all the others — along with a lot of other stuff — all got sold, donated, or discarded when we moved to Hawaiʻi.

The majority of people are (likely) unfamiliar with the figurines in this next painting.

I mean, the characters (some of them) might be recognizable from known fairy tales . . . but the style? I doubt it . . .

. . .they are figures based on characters from Pinocchio, and were designed by Jacovitti<<link.  Cocco Bill was a great inspiration during my formative years, fostering both my love of guns, and solidifying my belief bad guys (and gals) should be killed with nary a thought or concern. If you want more information about Cocco Bill, click on this LINK (it’s an old post of mine where I review what was in my bookcase).

But, even I realized those would not be a big draw . . . so I brought out my engineering tools . . . and photographed them.

Of course, that doesn’t exactly inspire a connection with people. For one thing, those are things that were going out of favor as far back as the late 1970s as computers began making inroads into what would eventually morph into complete dominance of every aspect of our lives.

No; what I needed was something more cutting edge . . .

I don’t remember what I submitted ( a search of my blog would get me the answer, but no one will click on the link so . . . if interested, do a search for ‘still life’).

This LINK will take you to the SmugMug gallery that has the full-size versions of the above and also photos in recent reminder posts.

I’ll close this update with a gallery of the above plus their monochrome counterparts. 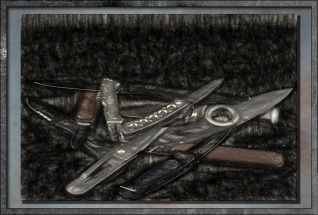