We love going on road trips.

. . . but COVID-19 has put a damper on the spur-of-the-moment-hop-in-the-car-with-a-bunch-of-coffee-and-snacks-and-head-out drives.

A surprising feature has popped up in our planning . . . we look for Wal-Marts along our routes and at our destinations. That’s because Wal-Mart makes an effort to clean their bathrooms regularly . . . unlike gas stations. Rest areas are out of the question because, despite semi-regular maintenance, they are . . . ah . . . questionable even in the best of times.

. . . my experience points to people be having no regard for basic courtesy and hygiene when traveling.

Last week, while looking at the map of the area, I noticed that a little over an hour away from us, is Chester, Illinois. “What’s there?” you ask. Well, we get to see the Mississippi River. Did I snap a photo of it? Nope. There wasn’t anything interesting about it. Just water. No barges, no riverboats, no canoes . . . just water.

Them be somewhat suspect representations of Lewis and Clark. <<<This is a link You see, they stopped here during their travels. Well, a nearby island, but close enough.

I don’t think they dressed like that while traveling. But, I could be wrong.

Both Melisa and I are fans of their expedition (we listened to the reading of their journal and read a couple of books on the subject as well as Undaunted Courage). <<<This is a link

This particular display looks . . . off . . . the hand and arm just don’t look right and he’s not looking where he’s pointing. And what is he pointing at? 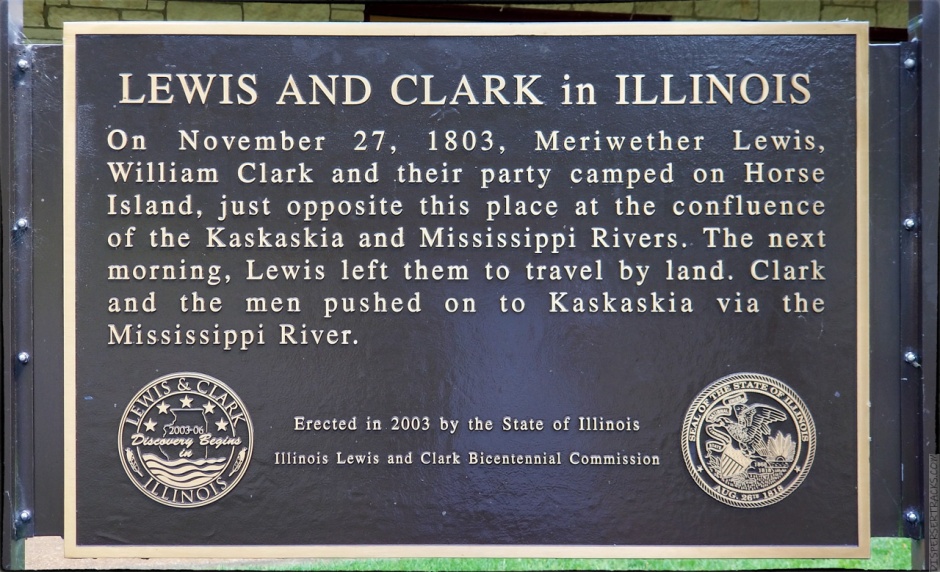 Holy crap on a cracker! Look at all them churches! For the record, Chester is a town of about five square miles with about 8,000 residents. That’s more than two churches per square mile . . . so, you know, a tad of the low side as far as small towns go. I mean, if you don’t have at least two churches within each block, you just ain’t pious enough!

But, what also caught my eye is Popeye. In fact, that’s why I picked this destination . . . I wanted a photo of this statue . . . 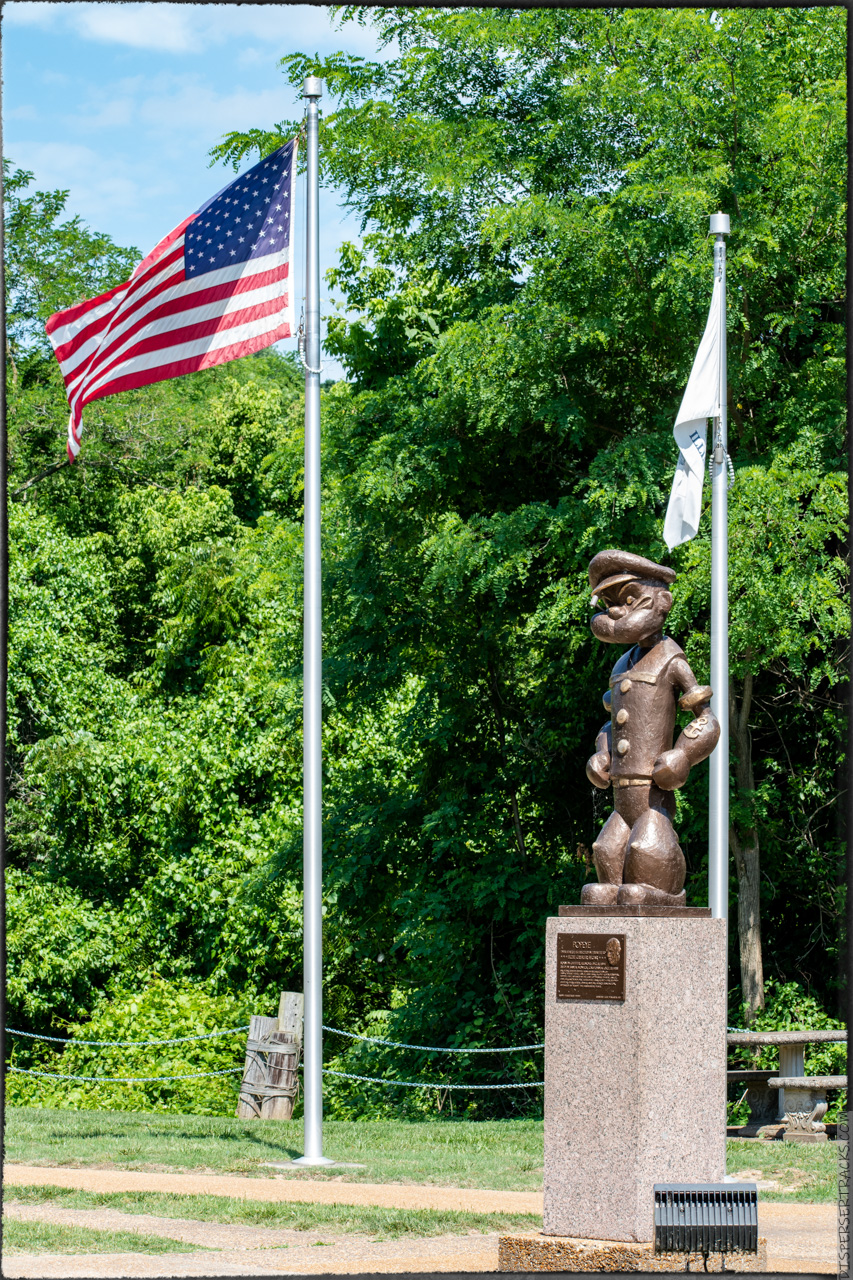 Here’s a closeup of the plaque.

He died young, he did, of leukemia and liver disease.

Here’s a gallery of photos of the statue, both from my Nikon and of photos taken with the phone. 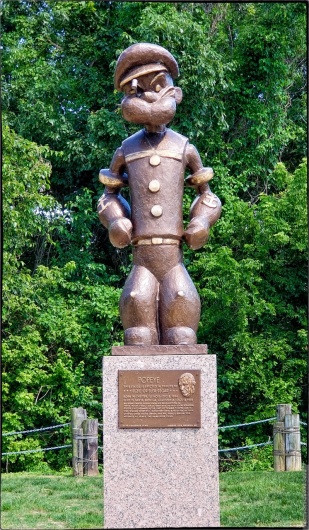 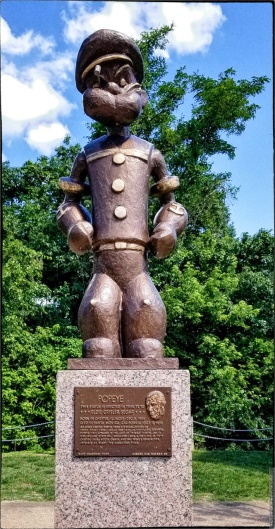 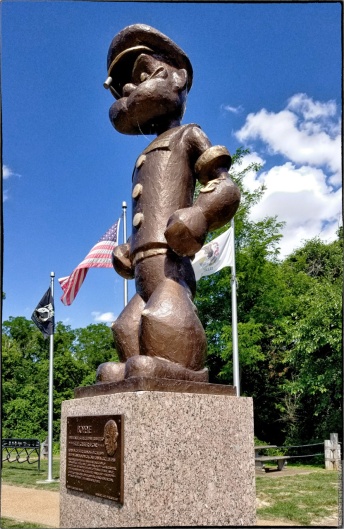 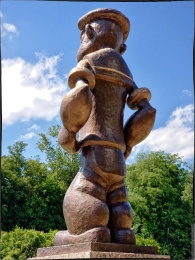 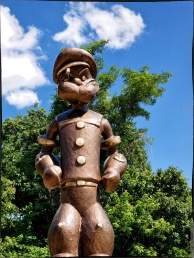 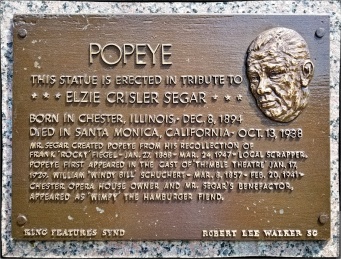 The plaque in the gallery is from the phone. Same plaque, different photo.

There’s a decent site for the character HERE. <<<This is a link

You can also find lots of videos on YouTube . . . for example, this 3+ hours offering:

There was a live-action Popeye movie that should join the ranks of The Matrix sequels as far as how it should be considered.

Honest, I liked the character in the comics and I’ve watched the cartoons, but the supporting cast always left me . . . puzzled. For one thing, Oyl was just plain annoying. For another, I couldn’t see why they fought over her . . .

There’s another cartoon I wanted to add here, but for the life of me, I can’t find it. Oh well.

So, spinach . . . we liked it fresh more than canned (but I can eat the canned variety, just not straight out of the can). I prefer it cooked than raw. Add a bit of vinegar (and olive oil if desired) and it’s quite tasty. It never did anything for my muscles or strength, but I get that was a bit of literary license.

Overall, it was a nice drive. Sadly, unlike Michigan, Colorado, and Hawaiʻi, Illinois is not exactly awash with vistas and interesting scenery. Basically, it’s fields as far as the eye can see. Corn and soy beans, mostly.

They do have a Garden of the Gods here as well (similar type of thing . . . interesting rocks formations but different from the ones in Colorado) and I’ll be covering that in a latter post.

And now, back to my exercises, then chores, and then maybe write something for the “L” stories round of the Alphabet Challenge. <<<This is a link

You, esteemed reader, could perhaps take some time to read the current “K” Stories and then vote for them HERE.<<<This is a link