I know, I know . . . the less-than-twenty-out-of-sixteen-hundred-plus-subscribers who were going to vote already did so. But, just in case a few more readers stagger in here . . .

. . . there’s only another week before the “C” stories voting closes. I suspect most people who had any intention of reading them have already done so, but just in case, you can vote for them HERE as well as find links to the stories so that — you know — you can read them before you vote.

Right, done with that.

I’ve mentioned before that sitting in a car with the engine running seems to play tricks on the Nikon Cameras VR feature. Pretty much every time I’ve attempted snapping photos with the engine running, even if I don’t lean on anything in the car (other than, you know, having my gluteus maximus planted on the seat) the photos come out blurry. I’ve done tests with the car running and the car not running, and it’s a real thing.

I mean the camera messing up is a real thing, not my ass . . . although, my ass is also a real thing but not relevant to this discussion.

Which is why you only get two photos from the small herd of deer I drove by . . .

As it is, I had to tweak these to get them this presentable.

On that particular day (last week) — the incident with the deer notwithstanding — I had a pretty good photography outing, including . . .

Let me tell you, these guys are difficult to photograph. I see a fair number of them, but they must know what cameras are because the moment I bring mine out, they leave.

I tricked this guy (or gal) by switching the car off, rolling the window down, and sit there for a few moments doing nothing. Then, BAAM! . . . out came my camera and I shot off a couple of photos.

In the photo after this one, the bird is but a brown out-of-focus blur. To be sure, I followed it on foot and snapped off another 10-15 photos, but none were closer than about 100-120 feet. Meaning, a small photo of a small bird, even when cropped.

I’ll do a proper post about the day because I got me a few decent heron shots, some seagulls, and this same Kestral hovering (I still have to process those — I’m doing some painting and also snacking, so you know, not much time for anything else).

I have one more photo, but there’s no large version of this one because I shot it through the highly-raked car windshield and it doesn’t have sufficient clarity to make it worth seeing any larger. 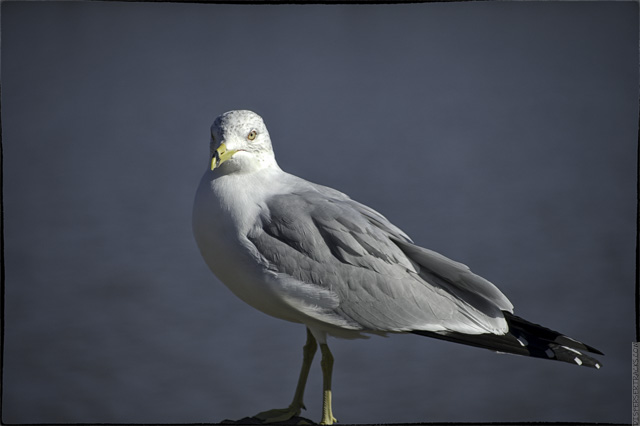