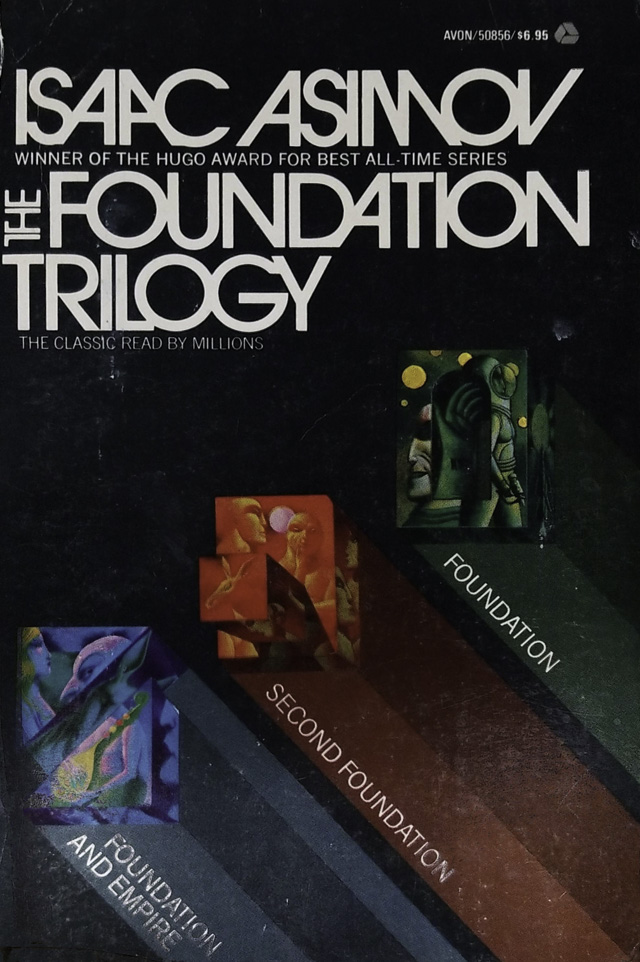 I wrote posts about the first three books because they were in Italian and wanted to expand/explain my choice. This book is in English and the reason I’m writing a post is . . . because I want to.

Speaking of literacy, how about reading and voting on the three “C” stories recently published on this blog? You can vote for them HERE as well as find links to them so that — you know — you can read them before you vote.

Isaac Asimov was the first SciFi author whose books I read (because of I, Robot). Meaning, after reading I, Robot, I read everything by Asimov that I could get my hands on. Well, almost everything. Mostly his fiction, including a couple of forays into the mystery genre (one neat murder involved time travel and a billiard ball . . . very clever). I read a fair amount of his non-fiction, too, but much of it became repetitive after a bit. The man was a prolific writer (HERE‘s his bibliography). By the way, his Robot stories and novels extend well after I, Robot and I think they are worth reading. I might have missed a few short pieces here and there, but I’ve read pretty much everything he wrote on robots.

One other thing . . . he was probably one of the first people that I read who identified as atheist/humanist/rationalist. Understand, for a long time, I wasn’t aware of a specific word that described my lack of belief . . . until I came across the word atheist and realized it wasn’t as rare as I thought. Reading someone who echoed my thinking on the matter of religion was an extra treat for me.

Foundation was my first introduction to what I would call epic science fiction (or SF sagas). Sort of the equivalent to LotR but for SciFi. In actuality, Frank Herbert’s Dune is more often compared to LotR, but you get the idea.

There are others (HERE‘s one collection of names, and I’ll probably do a post about the 13 of those series I’ve read), but Foundation made a pretty big impact at the time. And, I’m not the only one (see THIS to read about others who claim this book impacted them — really, you should click on that link; some names might surprise you).

And, it impacted fiction that came after it, much like Lord of the Rings impacted — and still impacts — the fantasy genre.

That’s not always a good thing. Stuff becomes so familiar when presented through a multitude of similar stories that two things happen: one, it begins to lose some of the wonder associated with it (as in, ho-hum . . . another sweeping galactic empire saga), and the other is that it limits innovation. Meaning, even if you write something else that’s great, everyone wants that one particular thing and the genre doesn’t progress.

There is one other thing with these sagas that kind of bothers me. Because of them, it’s harder these days to write just one book about something and move on to something else. Pretty much, sequels are expected, to the point that it’s easier to sell the idea of at least a trilogy than just a single book. At least, that’s my impression.

Meaning, I would like to read more than I do, but I see way too many books that are described as “the first in the series” . . . what if I don’t want to read a series? What happens to just writing one book? You know, a complete and stand-alone story.

I mean, sure, sequels might be asked for, but it’s different when they are all self-contained stories as opposed to one long story arc told over three or more books. To be sure, lots of people like that. But, that’s not me, Bob. Not in my reading, and not in my writing.

To that end, it’s why I like The Dresden Files books. Sure, there is a more complex and interesting story unfolding and an expansive world growing out of each subsequent book, but each book can be read on its own (although, admittedly, it helps to read them in chronological order).

But, to bring it back to Foundation. Probably what appealed to me most was the reasoning that we can predict what large groups of people will do.