Posted on 20February2020 by disperser 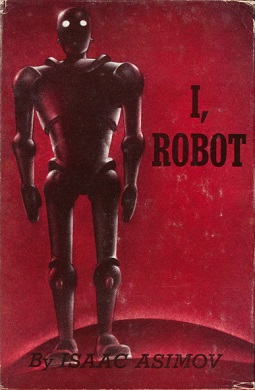 Cover art used in the context of commentary of the item and claimed under fair use.

I wrote posts about the first three books because they were in Italian and wanted to expand/explain my choice. This book is in English and the reason I’m writing a post is . . . because I want to.

Speaking of literacy, how about reading and voting on the three “C” stories recently published on this blog? You can vote for them HERE as well as find links to them so that — you know — you can read them before you vote.

The above cover is from the first edition of a book that was important in my life. That’s not a picture of the book I owned because I loaned it out and it wasn’t returned.

Anyway, it’s not the content that was important. I mean, yes, Asimov’s robot stories were interesting and engaging, but they didn’t directly change or affect my life. The key word being “directly”.

Let me crank up the time machine and look at the me-reader-that-was prior to 1983. I read Ian Fleming, Carter Brown, Micky Spillane, and about fifty or sixty of The Destroyer books (there are more than 150), and pretty much anything I could get my hands on. I also read a fair amount of historical novels by an author I really liked but who has long since departed from my memory. I wish I could remember him (I’m fairly certain it was a male) because I would love to recommend his books.

In there, I also read Lord of the Rings and everything else available from Tolkien in the late 70s and early 80s.

Side note: I probably read LotR at least four or five times (and other Tolkien offerings) . . . until I read Bored of the Rings. If you are addicted to reading LotR and you want to stop, get your hands on a copy of Bored of the Ring. Unfortunately, I can’t find my copy despite being sure I had kept it. One of the problems with frequent moves.

LotR had me believe fantasy was a genre I would enjoy reading. Alas, that was not the case in the 70s as most of the fantasy stuff I got my hands on was pretty much crap. Note: that’s my personal opinion and your experience might differ since I’m sure I didn’t read every book in the genre . . . just the most lauded.

Anyway, in 1978 I started working at Cadillac Motors. That’s when I met Ted Noble. Last I heard, he was still at Cadillac/GM and high up in management, although by now he might have retired. By the way, he’s who I referenced in the third paragraph of  THIS post.

For a few years, Ted Noble — for whatever reason — made it his mission to make my life miserable. And I mean miserable. It’s no exaggeration to say I wished him ill . . . daily.

But, and there is no specific event or memory I can pinpoint, by 1983 he was a friend and, later on, I even attended his wedding. But 1983 is important because that’s when Ted lent me I, Robot. I’ve lost touch with Ted (as I did with many, many people I met between 1978 and 2004 after we moved from Michigan to Colorado) so I don’t know if he knew what he did with lending me that book.

After reading I, Robot, I stopped reading everything else and from 1983 until roughly 2013, read nothing but SciFi. I tore into SciFi books as if they were Nutella-filled malasadas.

Within a few years, I made short work of Asimov, Heinlein, Niven, Bova, Clarke, Bradbury, Herbert . . . and moved on to Le Guin, Pohl, Zelazny, Brin, Ellison, Scott Card, Sturgeon, Bear, Farmer, Robinson (Stanley), Anthony, McCaffrey, Vance, Vinge, E. E. Smith. Once I consumed all I could of a given author, I was on the hunt for “newer authors”.

To that end, in 1983 I subscribed to the Analog of Science Fiction & Science Fact. It’s a monthly magazine specializing in what I call “hard science fiction” — the kind I liked — and I would read them cover-to-cover taking note of old, new, and up-and-coming authors.

Many authors, I found on my own, but Analog helped. And the list of authors I read continued to grow . . . Bujold, Pournelle, Saberhagen, Dickson, Blish, Donaldson, Robinson (Spider), Harrison, Asaro . . . and I’m sure others whose names I now don’t remember . . . and even more who never got past publishing short stories in Analog and similar venues. Analog published some amazing short stories by authors who never moved on to writing novels.

A note about Analog: I unsubscribed in 2013 because the stories were changing and I found myself no longer reading-it cover-to-cover. I can’t very well point to specific changes, but subscribing didn’t make as much sense. Especially since by then I had discovered the Dresden Files series (which, surprise, surprise, is contemporary/urban fantasy/mystery).

. . . 504 issues, many predating 1983 because I bought them used when I could find them. I still have them all . . . because I couldn’t give them away (didn’t find anyone interested in them) and I couldn’t force myself to throw them away or — as I did for many of my other books I wish I still owned — donate them.

I still read Science Fiction but I’m back at reading (and writing) a broader variety of genres.

That is the power of books; to give you a window from which you can experience a multitude of lives, events, thoughts, feelings, emotions, and every aspect of the human experience . . . all without ever leaving your comfortable chair.

In my opinion, no other genre does that better than Science Fiction.

By “that”, I mean exploring what it means to be human, the experiences of others who may be very different from yourself but share — and are driven by — the same needs and wants and desire for a good life. In my opinion, sci-fi gives you a better handle and more tools to navigate the difficulties of life than any other genre.

Certainly better than any fantasy book (I’m looking at you, Bible). I think that’s why it’s not a popular a genre . . . because it forces the reader to think independently, and these days, who wants that, right?

Odd guy with odd views living an odd life during odd times.
View all posts by disperser →
This entry was posted in Books, Reviews and tagged Analogs of Science Fiction and Fact, I Robot, Isaac Asimov, personal stuff, science fiction. Bookmark the permalink.