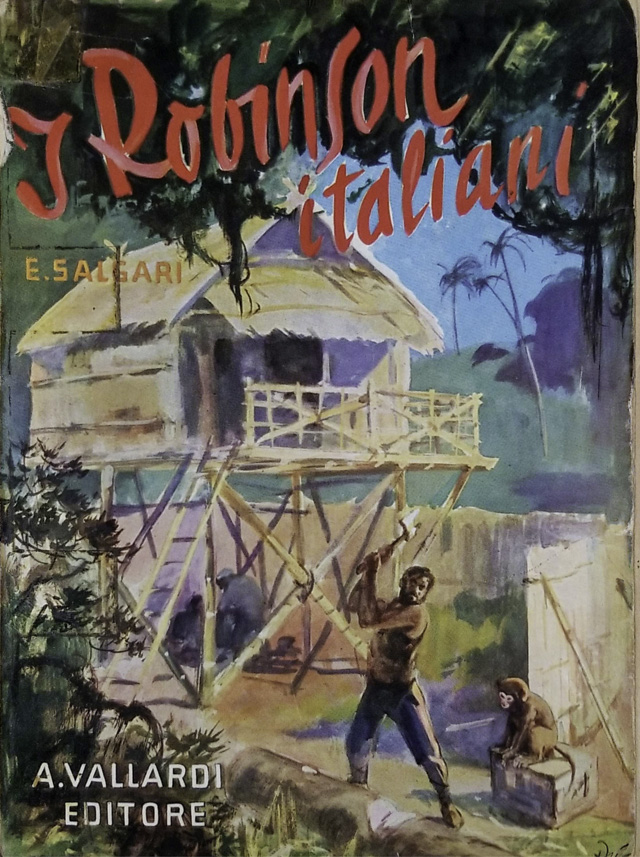 But, the first three books are all in Italian. So, I figure I should expand a bit on them here, on the blog.

And, speaking of literacy, how about reading and voting on the three “C” stories recently published on this blog? You can vote for them HERE as well as find links to them so that — you know — you can read them before you vote.

Anyway, the second of the three books is one I read — again, as best as I can figure from the edition I own — in the early 60s. That’s a photo of a copy I own and that edition is from 1961.

As far as I can tell, there is no English version. However, if you want to read it in Italian, here are two links to the complete text; the first is the more legible (HERE) since the second one appears to be a Google scan of an actual book (HERE).

This book — again with a namesake author — was written by Emilio Salgari, and he was obviously influenced by Daniel Defoe’s Robinson Crusoe.

. . . but only to a point. What I like about the book is that the main protagonists aren’t religious dicks. Robinson Crusoe was a religious slaver and that’s all I need to know. Sure, the character is a product of the time, but that’s like excusing the MAGA crowd for failing to think things through and have a moral center of their own.

Friday is never more than a servant (loyal, faithful, etc) to the religious slave trader, Robinson “dick” Crusoe. Some ascribe a hidden anti-slavery message to Defoe’s work, but they say — in great error and by turning two blind eyes — the same thing about the Bible.

You see, in the group of three castaways, one, Emilio (the others are Enrico and Tonno) has great experience in pretty much everything. Shades of The Professor in Gilligan’s Island.

Much like The Professor, Emilio’s expertise in all things is used to make life more comfortable for the castaways, often duplicating the then-modern amenities, at least when it comes to food and shelter and a few other conveniences. While the castaways of Gilligan’s Island can’t wait to leave the place, the castaways in this story overcome lots of adversity and build for themselves a thriving and flourishing community of people who love living there and have no desire to be rescued.

Could it be my eventual engineering degree comes from this early influence? No, but my desire to live in a deserted (well, almost deserted) island certainly has roots in this book.

A bit about Emilio Salgari. You can read about his life and works on the Wikipedia page but let me point out a few things.

First, he claimed expertise of what he wrote from travels to the Far East but there’s no indication he did so. I’m thinking to name the smart character in this book after himself was no accident.

Second, he was a very popular writer, penning more than 200 adventure stories and novels, but didn’t make much money from his works. In many ways, his was a tragic life that ended with him committing suicide by seppuku (a.k.a.  harakiri) on the 25th of April, 1911.

It’s difficult for me to contemplate what would drive someone to suicide but more so, that particular form of suicide. He left letters to his children, to his publishers, and the editors of his newspaper in Turin (his works appeared in syndication in newspapers).

The letter to his publisher read thus:

I guess not much has changed in the publishing industry, eh, Amazon?

However, Salgari left a legacy that spans more than a century and continues to this day. A legacy that influenced Sergio Leone and Federico Fellini, among others. Even Che Guevara, whose biographer claimed Che’s anti-imperialism was “Salgarian in origin.”

These are the works that Wikipedia says are available in English.

The Tigers of Malaysia series

I can’t attest to the accuracy of the list, but here’s the link to what Amazon has for sale in various languages. I’m assuming there are other places to buy Salgari’s books.

While I liked I Robinson Italiani, the greater impact of Emilio Salgari came from his Sandokan adventure series. But, his style of writing and focus on engaging action and dialogue seems to echo in at least some of my stuff. Or, at least I like to think so.