A third bout of Nikon D7500 photos shot here and there and other places some of which are near here or there or other places.

As you can see, we begin with a duck. A Mallard. Also, we have rain. The rain and the Mallard share the spotlight.

I was impressed with the clarity of the photo. The duck was probably thirty yards away and under overcast skies; meaning, the conditions were not ideal (lighting-wise). And yet, a clear photo of the duck. Also, a clear photo of raindrops hitting the water.

I had done a post showing raindrops hitting the water in one of my birdbaths and I had struggled to capture decent examples . . . and here, there were literally hundreds.

And, then there were more than literally hundreds . . .

You know how when you like something, you want more of it?

For example, let’s say you have one(1) of something you really like. You think, “I wish I had two more like it!”

Well, it doesn’t always mean you’ll like it three times as much.

As an abstract image, the above is pretty good. As an image showing lots of rain hitting the surface of the water, it’s terrible. More, in this case, is not better.

There’s another thing in play as well. Much depends on what it is you’re talking about. For instance, if you really love your spouse, you don’t need a billion more spouses for things to quickly head South.

In that case — and unless you’re part of some weird cult — one spouse is sufficient and you don’t want (or need) another; he or she will (ideally) take up the entirety of your store of spousal appreciation and love. There’s literally no capacity left for anyone else (again, barring the weird cult thing). In fact, should you try to introduce another person — even just one — you’ll likely lose out big time.

Other things have different limits. Dogs, for instance can number anywhere from two to six before things get too crazy. Cats, on the other hand, have a much higher limit. We don’t yet know what that limit is because someone is always trying to top the previous limit.

. . . I should probably do a post on the optimal number of various things. For instance, two refrigerators (or one refrigerator and one freezer), four televisions, 1.5 cars for every two persons (usually rounded up to one car each), one toaster, 1.5 bathrooms per person, and so on.

Anyway, the above mess of drops looks bad because, in part, it has the reflection of some trees competing for your attention. We can help the image somewhat by changing it to B&W (which isn’t really B&W; it’s lots of gray with some black and white mixed in — call it B&G&W) to get rid of the distraction of the green.

That’s an improvement, especially if you go to the SmugMug gallery (HERE) and look at the full-size version of the photo and can thus make out the individual splashes. You can also click on the image and see a larger version but it will still be difficult to see individual splashes.

That’s because it’s not just the green color, but the extra data of the trees reflection competing for your attention.

Without the reflected image of the trees, the drops are easy to see. However, now we run into a depth of field issue where only a portion of the image is in focus.

Easily remedied by cropping out stuff that’s not in focus.

I don’t know if it’s better to show these in color or remove what little color there is and show them in B&G&W . . . 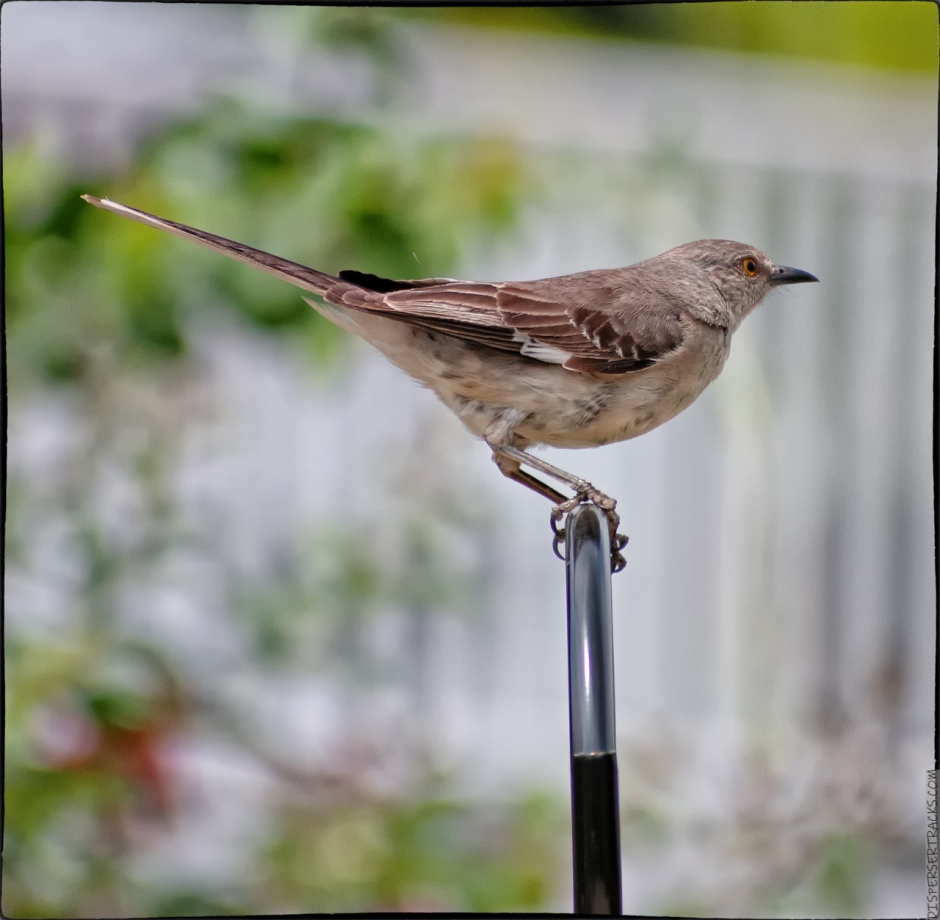 It might look pretty good in B&G&W but we’ll never know until I do it . . . some other time. 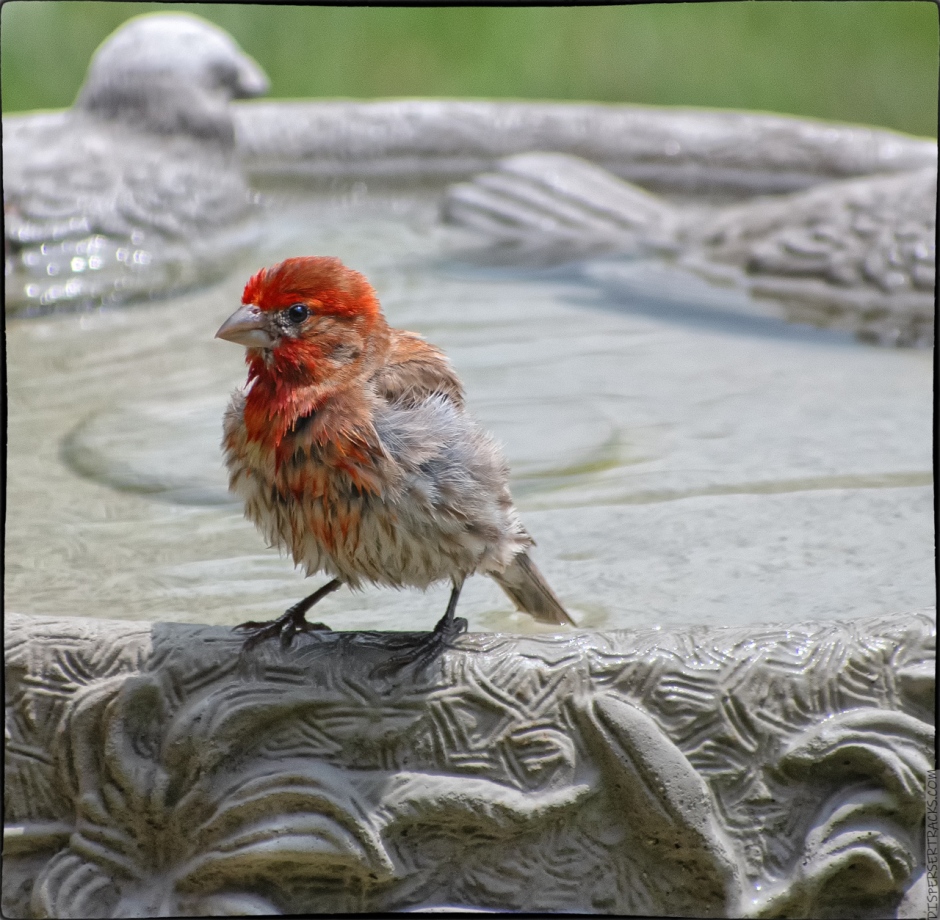 I say that because they appeared to not mind each other and they flew off together. OK, so it was in different directions, but still . . . bathing buddies. 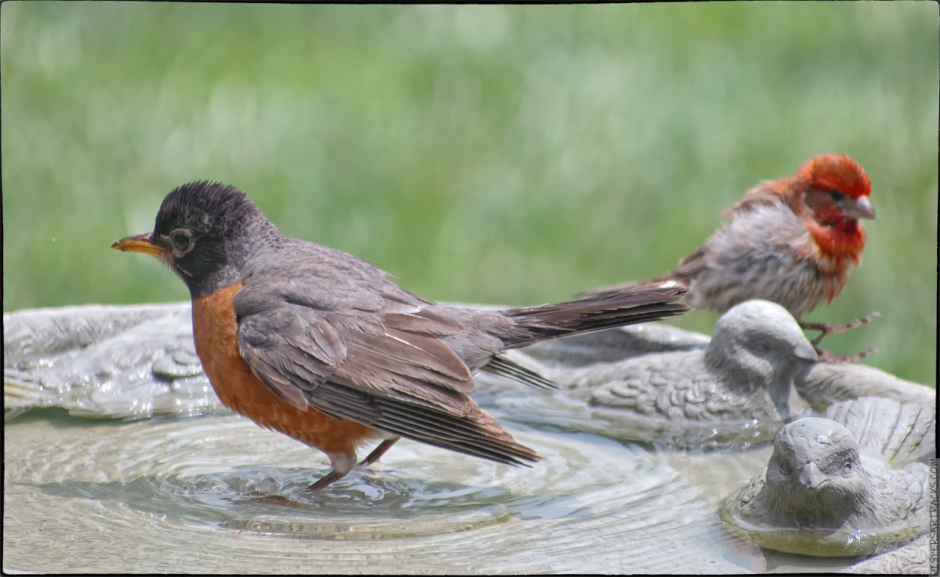 The finch was definitively the more nervous of the two and he (she?) kept running around the edge of the birdbath as it kept an eye on me.

Unlike with the previous bather, the Robin, I shot these photos by slightly opening the door and shooting through the opening. The previous video was shot through the front door’s glass (but it still came out pretty good).

Here are two more shots and then we’ll call this post done. 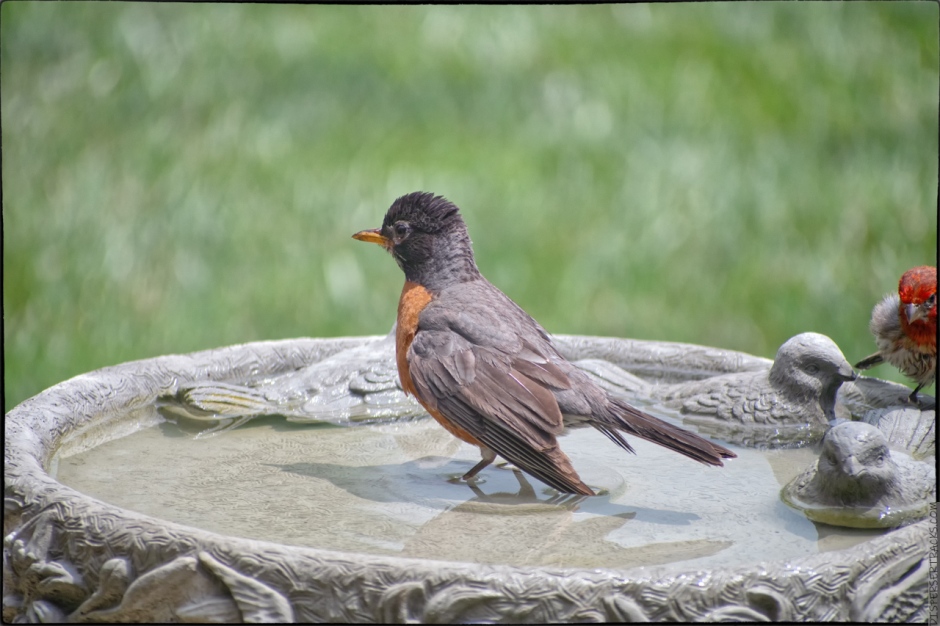 Some people might have noticed I’ve not visited their blogs lately.

Sorry about that. Lots of stuff going on. I have snacks to dispose of, YouTube videos to watch, music to listen to, weeds to pull, and I occasionally sleep.

Here’s the gallery of the above (in random order). FYI, random order means that every time someone opens the post, the order of the photos changes. If you want to reference a particular photo, either count down from the top of the post or describe it. 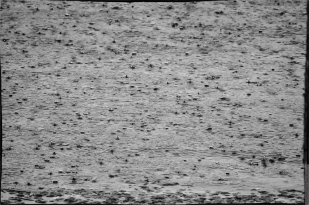 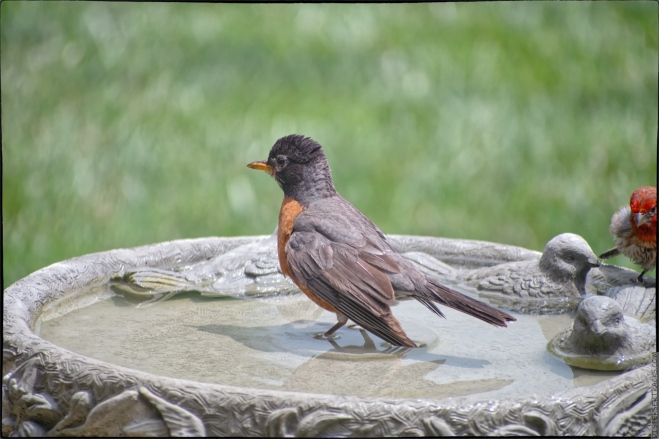 Nah! Just joshing with you.They are in order (or should be).