Posted on 16August2018 by disperser

I don’t have much new to say about the current state of society. I mean, at the individual level it’s still fairly civil, especially if you stay off Twitter, Facebook, and the comment section of any articles or news stories.

In the public sphere, however, things are looking grim and I marvel at the vitriol, ranting, distortions, and outright lying by left and right extremists. They are playing two different games but both are very dangerous and that’s why I keep asking the question.

I ask because it seems to me both sides are making a concerted effort to whip up their ranks into a frenzy that stokes hatred of the other side.

Sure, I expect it from the fringes but we now have “mainstream” personalities and organizations giving voice to the same hate-inciting — and sometimes violence-inciting — rhetoric and loyalty propaganda that used to be common in the dark recesses of the lunatic left and the rabid right.

Depending on the news of the day, cops, judges, celebrities, politicians, and even regular people are either branded heroes or reviled as enemies. The funny thing is that within the span of a few weeks the same person can go from hero to villain and back to hero based on nebulous, shifting, and often self-conflicting metrics.

I’m only getting small doses of it, purposefully avoiding much of the vitriol that swamps any type of social media. But, what little I read is amazing. Take any news item and you can read diametrically opposed opinions regarding the validity, the significance, and the implication of what usually is — in essence — a non-event.

I’ve had people ask me “Have you heard what {enter name du jour} said {or didn’t say} about {cause du jour}?”

My immediate reaction is two-fold. First, I ask why should I care what that someone says, but second, immediately other questions come to mind. Questions like: What was the context? Was it a joke or were they serious? Was it said out of ignorance or were they being willfully provocative?  Was it part of a political speech or rant or casual conversation? Is it likely to lead to anything or was it just venting? Most important: Is the person an idiot? Is the person doing it for publicity? Do they stand to personally gain from whatever they said? What’s the agenda of saying such a thing?

99% of the time I think it’s extremely uninteresting, unimportant, and a waste of brain cells to contemplate . . . but this is where I have to be careful because if I don’t immediately offer up the expected appropriate response (be it glee or outrage) I’m immediately targeted as being one of them and subjected to indignant and angry castigation.

. . . I wonder how many people take the easy way out and just smile and nod in agreement to whatever they hear . . . I hope it’s the majority and I also hope they’ll cast their votes as informed voters not only in national elections but in local ones as well. And by that, I don’t mean one or the other party, but rather the moderates in one or the other party.

Realistically, I’m not that hopeful. 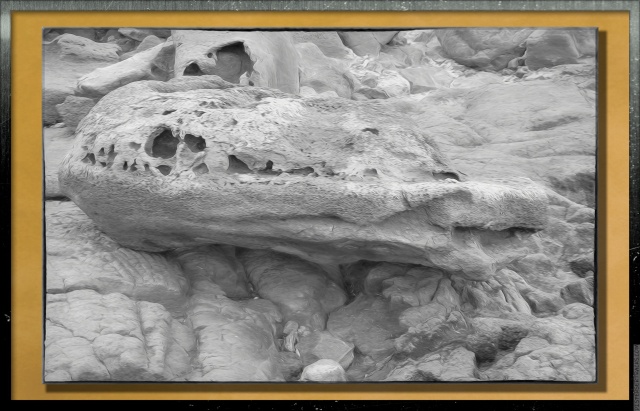 On many occasions, lava can look positively prehistoric . . . probably because it is.

I owned an Oldsmobile once . . . Comfortable but underpowered so I still aged and suffered the ravages of time. But then, so did the Oldsmobile.

Truthfully, very little is impervious to the ravages of time and, eventually, the Universe will achieve zero entropy. Some people think this will happen when everything is at zero temperature. On the other hand, all that really needs to happen is for the Universe to exhaust all thermodynamic free energy to do work. Think of it as a world with nothing but teenagers . . . no work will be done and everything just stops.

Of course, that will take many multiple trillion billions of trillions of years . . . meanwhile, we can witness the Plastic Multicolor Worm Monument Beginning To Melt During Latest Heatwave.