Thanks to all who participated in my little experiment. So, here’s where we stand. as I write this . . .

First, let me show you two screen captures from yesterday: 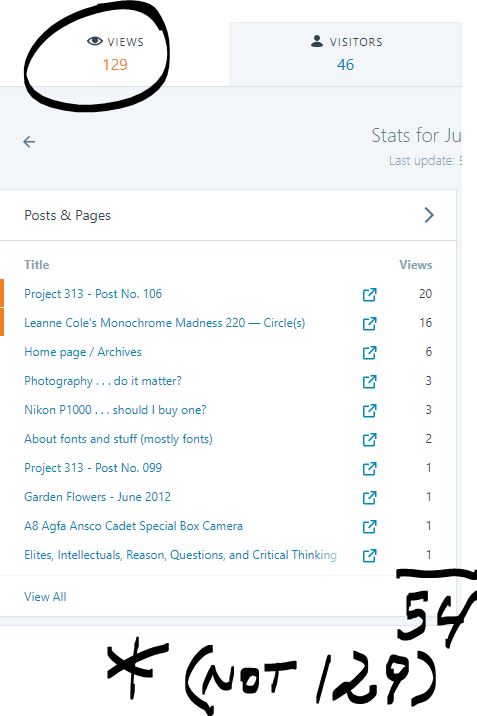 These two numbers are what prompted my initial inquiry to the Happiness Engineers at WordPress . . . I wanted to know why there’s a difference between those two.

Even when you hit “View All” at the bottom left of the “Posts & Pages” counter, you still have a discrepancy (and yes, I e-mailed these to the Happiness Engineers): 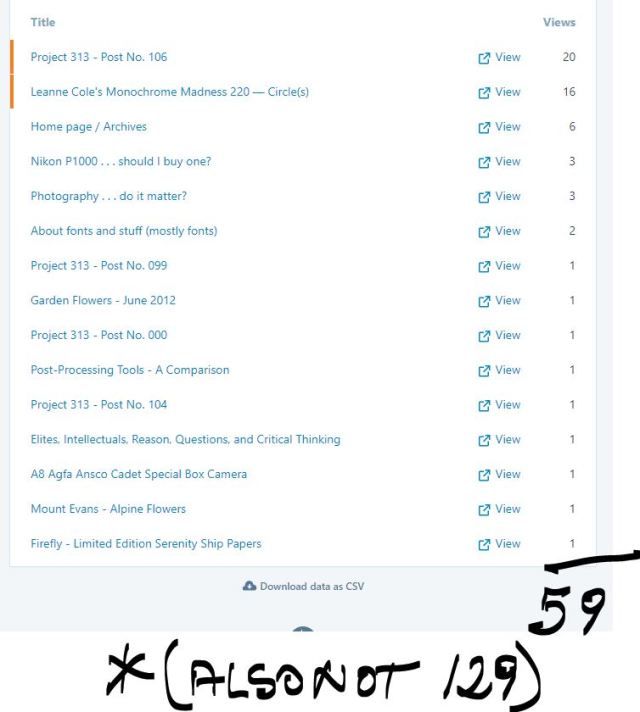 To be clear, the Total Views typically come close to the number you get by adding up the individual Posts & Pages views. Some days, like yesterday, they don’t.

I received a lot of explanations (we exchanged something like 10-12 e-mails) which I shot down as either being factually wrong or not conforming to their own explanation of how things work.

The one they eventually hung their hats on was the following (I’m paraphrasing):

“Disperser, you ignorant dolt . . . of course the two numbers don’t match because when people read the posts from the home page, it only counts as one view for the page but as they scroll down and read stuff, it adds to the total views . . . you ignorant dolt!”

I’m being a tad unfair here because they never actually used the words “you ignorant dolt” . . . it was just implied as I kept asking the same question and explaining to them why their previous answer wouldn’t result in the numbers I was seeing.

As I mentioned in the previous post, how would WordPress count those posts people are scrolling through unless they click on them? And, wouldn’t the Home Page/Archive views be a lot higher? How would WordPress even know people are reading the posts instead of just scrolling through. Maybe their cat sat on the keyboard while the owners went to get a coffee, in which case the scrolling — according to what was said — should rack up many, many views.

A side argument was then made about the difference between posts that have a “continue reading” break and posts who don’t have that. The implication being only those without that break would be counted as read.

Well, that still didn’t make any sense to me because if I was monetizing my site, I would just have my cat sit on the keyboard as I racked up views (I don’t have a cat but if I mask my IP address and go to my blog from an incognito window, my visit would count because the site doesn’t know it’s me — the blog’s owner — reading the blog).

That’s why I asked people to scroll for a while . . . most of the latest posts have “continue reading” breaks, but many earlier ones don’t. I wanted to see if the numbers would show a difference between Total Views and Posts & Pages views.

A-HA! the numbers don’t match . . . the Happiness Engineers are right! 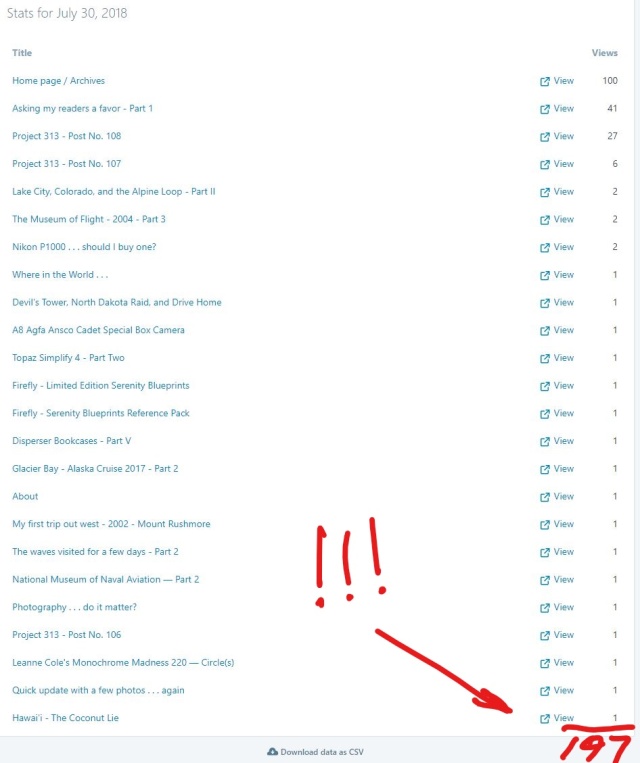 Usually, the Total Views and the Posts & Pages views agree pretty well. There may be an occasional discrepancy while stats are being updated but seldom more than a few.

Yesterday’s discrepancy of 70 views is not explained by people reading posts by scrolling down the Home Page or the Archives. There have been occasions when I had three times as many Total Views as Posts & Pages views.

To date, I’ve not received a satisfactory explanation for why this happens. It’s not often, but when it happens, it’s usually a factor of 2 or higher.

Realistically, I don’t care . . . but I’m curious. When I happen to notice a huge number of views, I’m curious as to what readers might have found interesting . . . so that I don’t repeat the mistake.

When I see my posts accounting for much less than the Total Views, I get even more curious.

Understand, I’m perfectly happy with the idea these stats are not worth the digital ink they’re written in. I even have an idea as to what might drive up the numbers (tomorrow there’s another test; Part 2 of my favor-asking adventure).

It just annoys me that they don’t fess up to either not having a good algorithm or counting something they shouldn’t be counting.

If anyone is interested, on the sidebar of my blog there’s a little graphic labeled World of Stuff Readers . . .

If you click on that, it takes you to ClustrMaps.com . . . 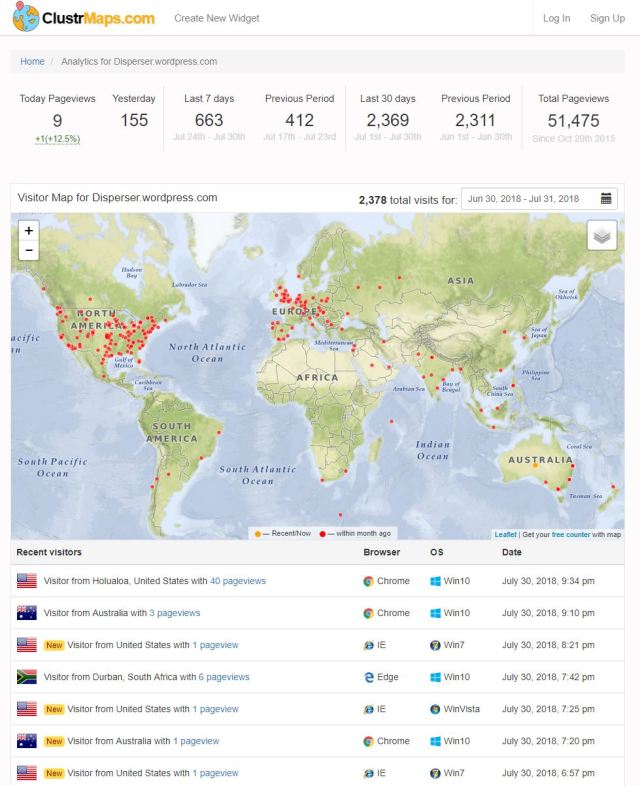 This counts visitors to the site, not views. Visitors. It’s also based on a different time zone (one of the problems with living here . . . the world is living in my future). 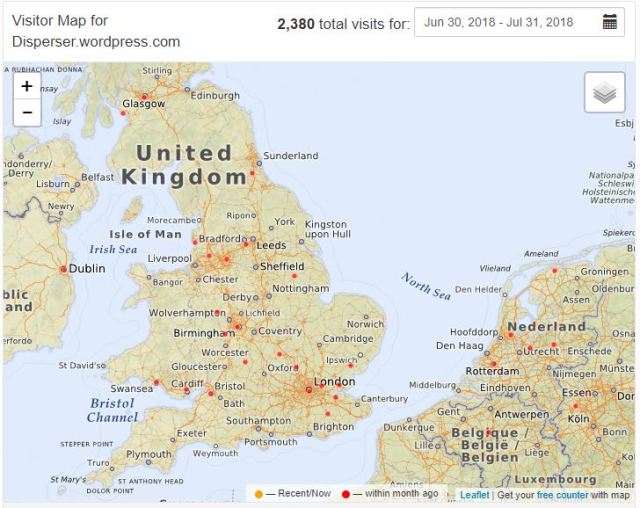 Of interest just now that I look at the map, is Australia . . . 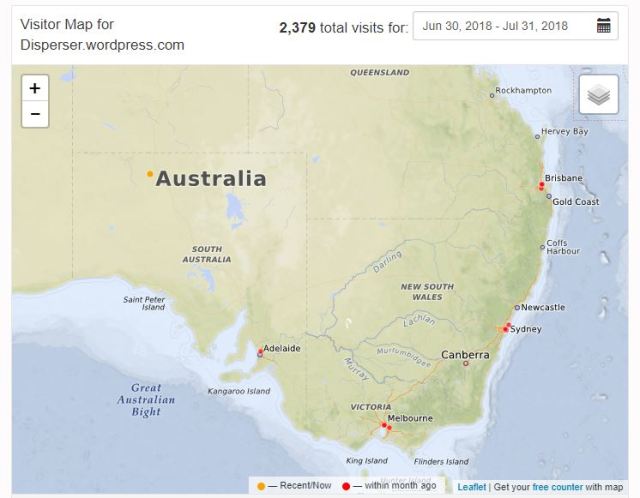 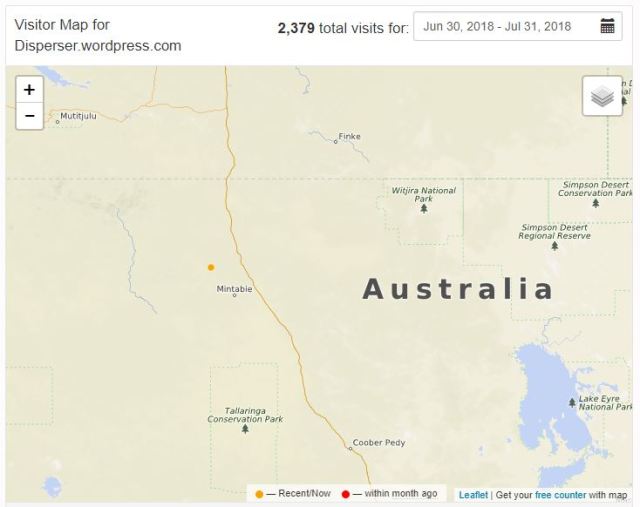 That looks to be in the middle of effen-nowhere. Let me check Google Maps . . .

Hmm . . . my guess is that’s at the Nerlawallbinna Waterhole . . . probably near the Mullawatina Dam. The area has a population of fewer than two people per square mile.

In case anyone is worried I can identify where they live, relax. One, I don’t plan on visiting anyone and, two, the location is based on the carrier-assigned IP number so it only gives me a general area.

Of course, if you’re the only one in that general area, then . . . well, then you should have listened to me and got all your friends and neighbors to read my blog so as to mask both your activity and location.

Of course, if you leave a comment, I can still find you . . . unless you use a VPN and mask your IP.

But, no worries . . . I ain’t planning to go looking for anyone.

29 Responses to Asking my readers a favor – Part 1 — Results