Still, I want to say a few things about Pastafarians.

I often use FSM as a substitute for the word “God” and I do so in part because FSM has a much better book to live by than any of the other religions I know of. That’s the loose canon link but if you want to read the original Gospel of the FSM, it’s HERE.

To date, Pastafarians are only recognized as belonging to a religion — with all the associated rights — in two countries and the US is not one of them. In part, that’s thanks to the effort of the established religion and its iron grip and claim that it should be the only religion with any rights.

To be sure, I’m not an ardent Pastafarian despite being an admirer of their headgear. I’m more of a cultural Pastafarian than a true adherent to the Church and its teachings.

I mean, most of the teachings are things I do anyway so I can see where I might be confused as a true believer. I part ways with them — as I do with all religions — when it comes to their claims about the origin of the Universe and of life and of humanity in particular.

Mind you, they’re still saner than the religions I know of, especially since — unlike other religions — they’re not prone to violence when someone questions Pastafarian scriptures. 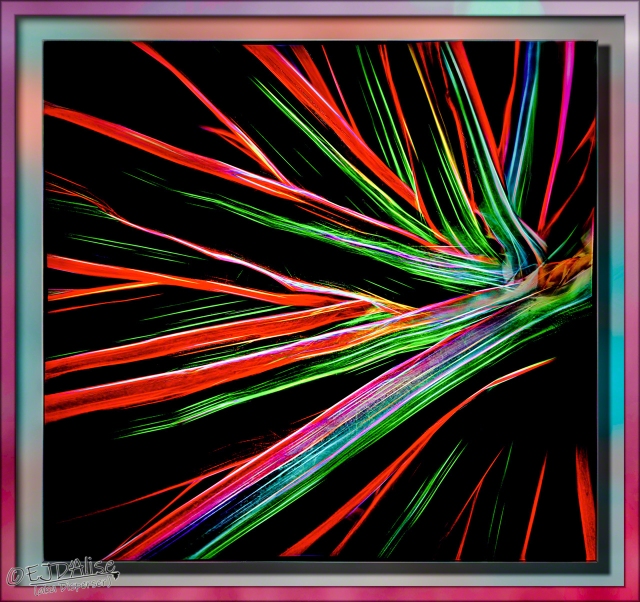 This is the last of my mini-series of Ti leaves. They’re unrecognizable now unless you’ve followed the progression from the original to here.

Although, truthfully, it could just as well be that it sneezed.

I don’t know why, but this had me laugh out loud. I’d use the acronym but I think it’s lost its luster and it’s now bandied about all willy-nilly like. I prefer the old-fashioned — if more tedious to spell — word expression.

I had high ambitions for something really spectacular for this doodle, but it didn’t work out . . . I wanted to draw Excalibur but ran out of room.

I wanted to draw Excalibur but ran out of room