It’s been a while since I brought up breakfast.

. . . er . . . I don’t mean “brought up” as in, you know, fingers down the throat and aiming for the bucket. I mean, since I wrote about before (HERE). That was three years ago and not much happened since then.

. . . er . . . I mean, lot’s of shit happened and the world is riding a handbasket to unknown destinations but when it comes to my breakfasts, that post about covered them well. 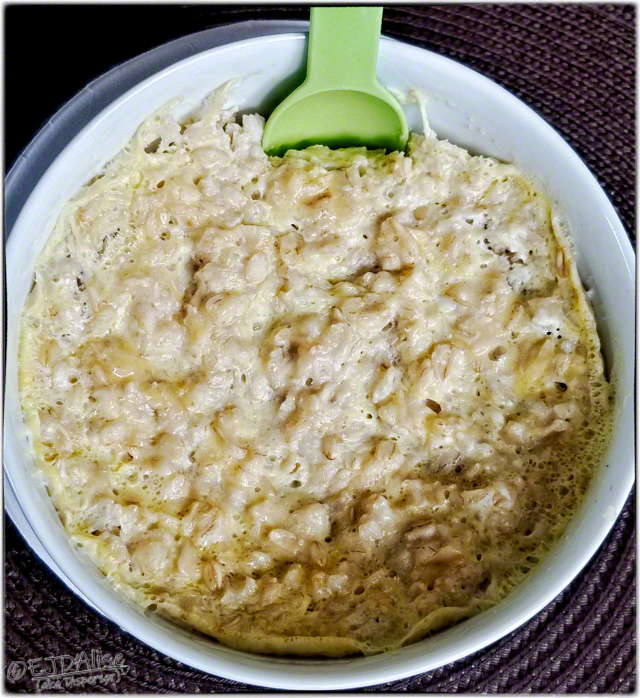 “What the heck is that?!?” you scream in horror.

Well, Bob, the answer lies below. Read on at your own peril.

So, one of the things I have for breakfast is oatmeal much like depicted in my last breakfast post except that I now add walnuts in the bottom of the bowl in addition to later adding the Laughing Cow Swiss Cheese. The walnuts add a flavor that blends well with the cheesy oatmeal.

To recap — sans walnuts — take a bowl and add the desired amount of oats. I use Quaker Oats Traditional Oats, no flavoring added. Because I don’t like chewing on stuff with the consistency of woodchips, I soak them for ten-to-fifteen minutes with enough water to keep them fully submerged.

The suckers are water deprived and they soak up as much as they can. They end up looking like this. 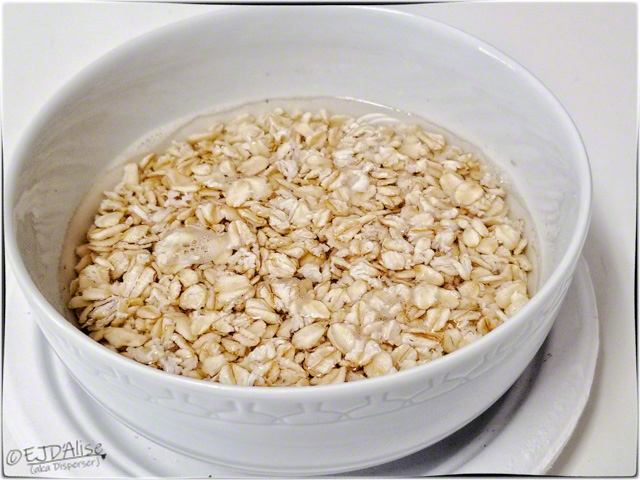 Note that although they’ve swollen up, there’s still sufficient water in there. Some people like their oats runny and uncooked but that’s not me, Bob. By the time I’m done, I want the consistency of . . . well, it’s hard to describe. Runny enough so that I don’t need to cut it with a knife to eat but thick enough to support a spoon that I stick into it. You’ll see later.

At this point, I cook the oatmeal for about a minute and a half. Because of the amount of water in the bowl, that’s about as long as I can cook it before it begins to overflow the bowl. Hint: don’t let it overflow the bowl; it’s messy and difficult to clean. At the end of the 90 seconds, it looks like this:

These days I choose between two kinds of cheeses.

Mix until evenly distributed and all the oats get familiar with the cheese.

At this point, I’d normally throw it back into the microwave. Well, not actually throw it; that’s a figure of speech. I put it gently back into the microwave taking care not to dump it on the floor in the process. Note: that’s a paper plate under the ceramic bowl. I find it easier to move the bowl from place to place by holding the edges of the paper plate instead of leaving pieces of my skin on the sides of the hot bowl.

Well, prepare to have your mind blown. Well, perhaps not. Perhaps, you’re one of the many people already familiar with this. People who have kept this from me.

Some will comment about the bowl. Yes, yes, it has a molded-in pouring spout and ys, it works well. You can buy nearly everything these days.

But what you should be noticing is the ovoid shape in the bowl. Yes, that’s a nice fork. We’ve had that set since the 80s and they are both comfortable and substantial and durable as heck. Quality stuff. You can’t bend this fork even if you vigorously cut food with it or wildly stab food with it. You’d break the plate before bending the fork; it’s that sturdy.

No, not drink it; I’m pouring it over the oatmeal.

OK, I’ll grant you that it looks less-than-optimal and perhaps not all that appetizing.

The visuals slightly improve once you mix it in and each oat gets the yolk.

Because the oats are still hot, the egg partially cooks . . . but I take no chances. Back into the microwave it goes for another two minutes.

The resulting eggy-cheesy-oatmeal is fluffy and it tastes . . . GOOD.

OK, I admit that when I read about this, I was skeptical. But, I’m an adventuresome kind of guy, at least when it comes to food (within reason; you’ll not get me to eat sushi).

This was a pleasant surprise. So much so that it’s been my choice for breakfast for the past four days. It’s actually a brunch since we don’t get back from the gym until 11:00am or so. Each time, I was tempted to make a second batch. Not because I was still hungry (I wasn’t) but because it tastes that good (at least to me). 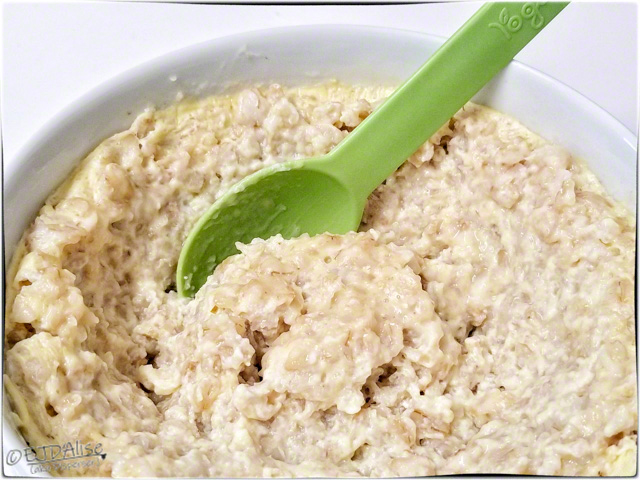 It’s difficult showing the fluffiness and airy consistency in a photo. The above is my method for eating oatmeal. I push the oatmeal up against the side of the bowl and leave a dome in the middle.

That’s something I do with risotto, as well . . . unless it’s one of them runny risotti.

Pushing it up against the sides helps it cool (the stuff is really hot when it comes out of the microwave and I’m a delicate sort). The center dome/island remains hot and as I eat around the side, I push more from the center out to the sides to replenish what I eat.

I’m sure the above is much more than what you wanted to read about or learn. Still, while people have different tastes, if at all intrigued by eggs in your oatmeal, give it a try. If you like it, spread the word.

Here’s the gallery of the above photos. 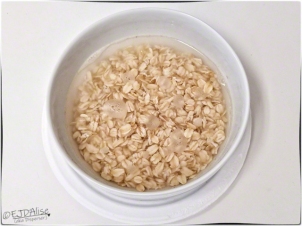 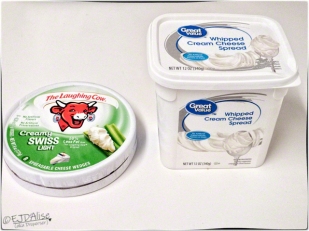 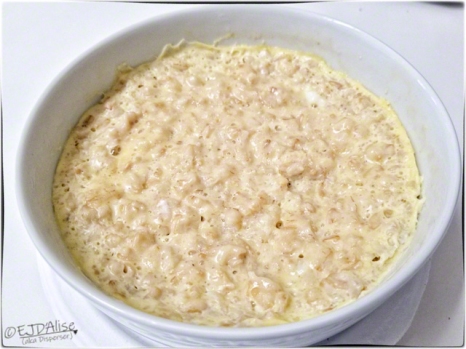 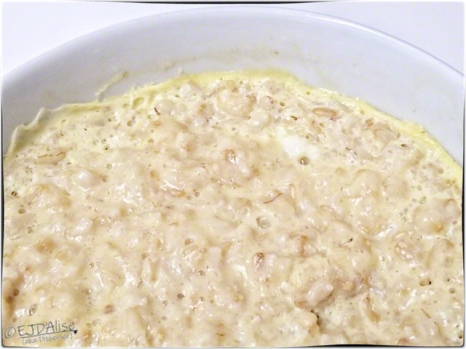