I have 386 photos to share and while I toyed with the idea of doing it all in one lo-o-ong post, I’ll instead break it up into multiple posts.

These are the pared-down versions of over 800 photos I shot over the course of two visits to the National Museum of Naval Aviation in Pensacola, Florida. The photos are from 2014 and that gives you an idea of just how lazy I can be when processing photos. Fair warning: I’m presenting the planes as displayed four years ago. There might have been additions to the collection, some might have been moved, and some removed to make room for other planes.

Before we get started, a bit of information. I’ll be posting my own photos but — whenever possible — the photo caption will have a link to the Museum’s own description for the plane in question. Also whenever possible, I’ll include an additional link. For instance, for the above plane, I’m including a link to the Wikipedia page for the Grumman F-14 Tomcat.

There are many other links I could have picked but I’ll leave it to the reader to hunt them down (do a Google search). Hint: I’ll often pick the Wikipedia entry because they typically have many links included as references for their articles.

Yes, it’s just as expedient — if so inclined — going to the Museum’s own website and browsing their collection. This post is mostly for me since I went to the trouble of taking and processing the photos.

Once I link the information for a plane, if I happen to show it again (some planes are photographed at different angles), I won’t include a link. I’ll also won’t duplicate information from the links unless of interest to me. In previous airplane posts, I copied descriptions and pasted them in the post.  I figure anyone interested can just click on the links and read whatever interests them.

One last comment before we start; all of the photos have been processed using the Nik Collection by DxO modules. The first day I shot hand-held and with a high ISO (1600 to 3200 and occasionally higher). That combined with the indoor lighting made the photos pretty grainy . . . it’s thus a testament to the tools I used that they turned out as well as they did.

OK, here we go . . . No, wait; as usual, click on any photo for a larger version to open in a new tab or window. There will be a gallery at the end of the post.

Here’s another shot of the Tomcat mounted on the pedestal in front of the museum.

The museum is free to visit and it’s only closed a few times a year. If you happen to visit when the Blue Angels are practicing . . . well, you better get there early. Even when we went, the parking lot was nearly full by the time we got there.

The entrance is nice and airy and sports a sculpture entitled The Spirit of Naval Aviation.

The entrance sports a few aircraft and a number of Aircraft Carrier models.

These next planes were a bother to identify because I didn’t bother to photograph the signs for them . . . something I did for all subsequent planes.

The red plane hanging on the wall is a Douglas D558-1 Skystreak and here’s the Wiki entry for it.

The jet behind the pillar is a Grumman F9F-2 Panther and here’s the Wiki entry for it.

The plane in the foreground is listed as an FM-2 Wildcat which is a variant of the Grumman F4F Wildcat.

All of these photos were “easy” as there was lots of available ambient light. Not so for the rest of the photos.

In case it’s not obvious, that is a big plane. The Navy wanted a larger version of the PBY Catalina . . . this is it. Read the Wiki entry here. I’ll have other views — including a panorama — of this plane.

Literally in the shadow of the Coronado’s wing sits a Grumman F7F Tigercat.

I think it’s an elegant plane, especially comparing it to some of the workhorses from that era.

The Grumman F8F Bearcat might not have seen much WW II combat but it was popular in the racing circuit.

The Grumman TBF Avenger (designated TBM when manufactured by GM)

I’ve always liked the looks of the Vought F4U Corsair’s gull-wings and it’s interesting reading the only reason for the feature was to allow ground clearance for the propeller without making the landing gear struts too long.

This version is designated FG-1D Corsair and built by Goodyear. I like the nickname “Whistling Death”.

The plane hanging above the Corsair is a Brewster SB2A Buccaneer. There will be another link to it later on when I show a better photo.

Another aircraft that gave me the runaround as far as identification goes is the Grumman J2F Duck. Here it is, just hanging around all casual-like.

Next up is a plane that is different in the Museum’s listing than the photo I took in 2014.

The photo in the Museum’s listing is for a plane that carries the number 17 and has an underside external tank. It could be they repainted this one or swapped it out for a different version of the same plane. The Wikipedia entry for the Grumman F6F Hellcat does list the museum as having two of these planes. The (-3) classification indicates it was used by the British.

And now, a change of pace . . . something that is neither a boat or a plane but is nonetheless a vehicle that served in the Navy.

It might not be immediately obvious to readers, but that car had a “suicide door” that if left ajar could swing open and pull the passenger out. Meaning the door opened front-to-back. As this was primarily used as a Staff Car for high-ranking officers, we can assume said officers might not have been well-regarded.

Plymouth in the 1940s became the third most popular car brand (almost surpassing Ford) mostly on the strength of it being cheap.

Notice the mention of the paint color . . . something I could not get quite right because the car is in a poorly-lit area and thus suffers from reflected light making it appear different in color.

All of the above shots are with me using the on-camera flash and that gives it a slight blue tinge I couldn’t quite correct without messing the colors for the surroundings (also, I didn’t want to mess with it too much).

Here are the shots without the flash . . .

That’s closer to the actual color of the car but I had to really lighten the scene so that’s probably also a bit off.

Another quick note . . . these photos are grouped no so much by subject but roughly in chronological order. A couple might be reversed because I prefer showing one orientation before the other but overall these are sequential.

Here’s a shot of three of the planes I mentioned above; The F6F Hellcat, the J2F Duck, and the SB2A Buccaneer.

That’s George and Fred discussing the merits of Metamucil versus just eating lots of oatmeal to get the required amount of daily fiber.

I’m kidding and probably being a bit mean as those are likely two pilots discussing the merits of those planes. They are too young to have flown them during the time the planes were in service of the Navy but they might have piloted more modern planes.

Next up, we have a Douglas SBD-3 Dauntless and a pretty famous one at that:

That’s a veteran . . . the plane, not the man. I mean, the man is also likely a veteran, but that particular plane is a Pearl Harbor survivor. Click on the link for a more detailed history. Other info HERE and HERE.

Here’s the plaque at the Museum:

The Museum website has a Sunken Treasures display (HERE and HERE) that was either not there when I visited or I completely missed.

I’ll end this post with two more photos of BuNo 2106 and call it a day.

Here’s the gallery of the above photos. To see the photos in their original size or presented a bit better, please visit the associated SmugMug Gallery HERE. 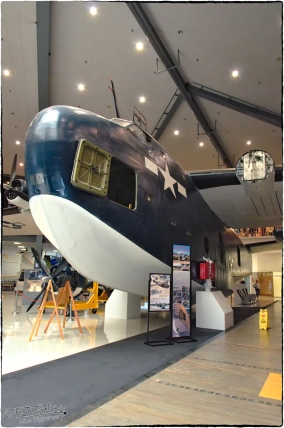 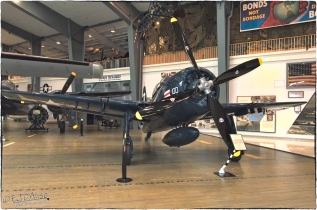 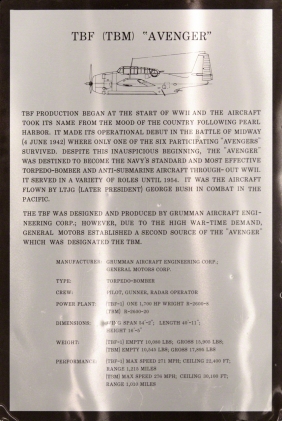 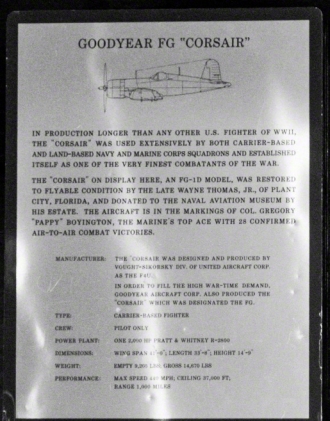 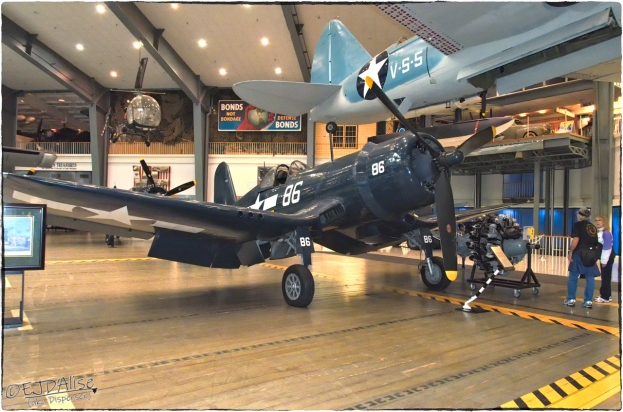 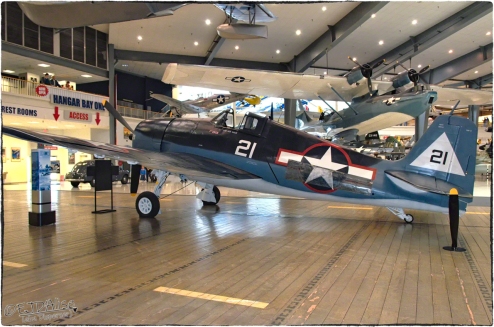 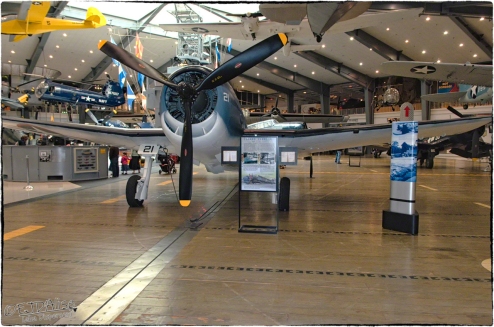 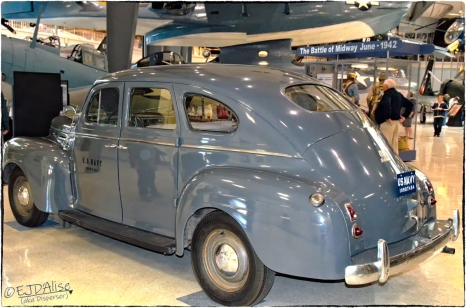 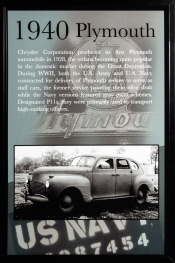 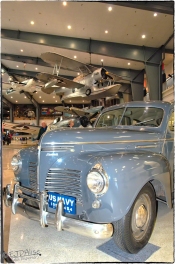 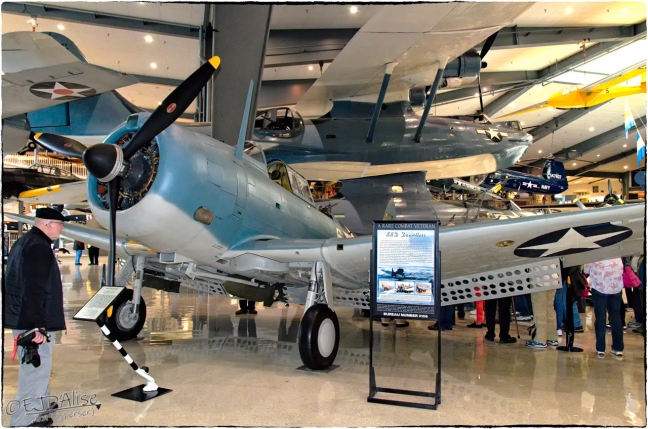