In lieu of better things, I gotz more Samsung Note 8/Snapseed/Pixlr stuff I can share as I continue the litany of “woe is me for I have no PC!” Say, I could make a play on Ellison’s title (and hopefully not get sued) . . . I Have No PC and I Must Post. 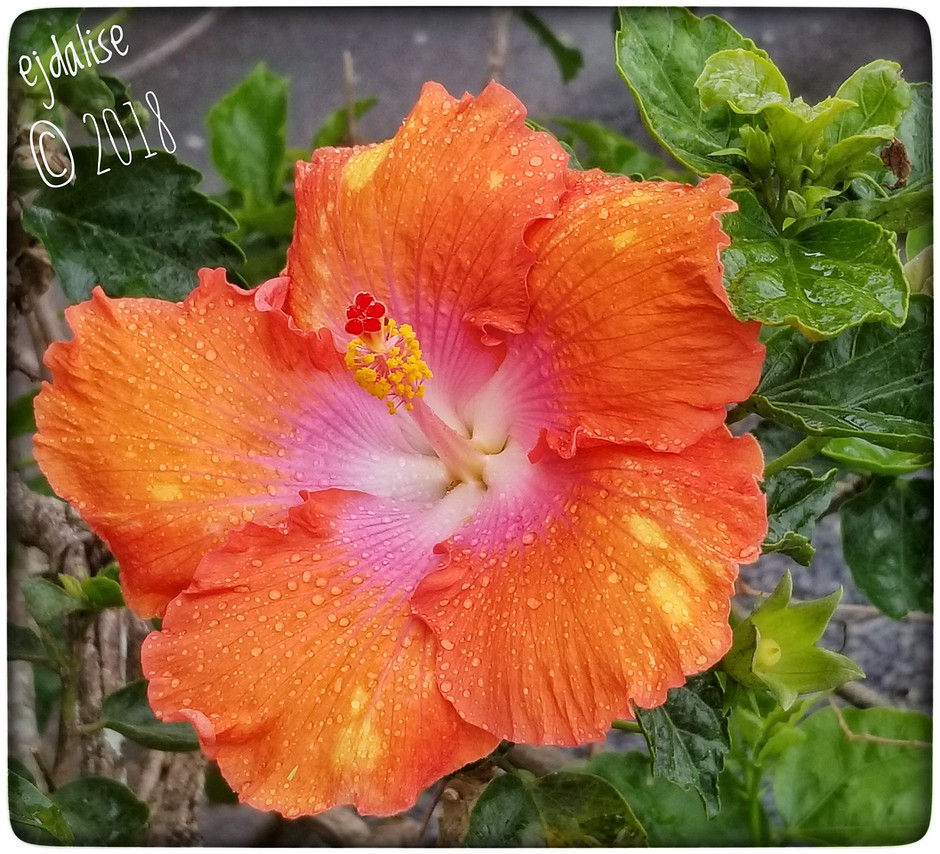 I’m trying something new and perhaps more expedient as far as sharing the photos. These photos are all in THIS SmugMug Gallery. All I’m doing is pasting the link here and the photo shows up. I assume that clicking on the photo will take you to the actual gallery. (Note: I just checked, and it does . . . HOWEVER . . . whereas I set my links to open a new window or tab, I can’t set these links to do the same (thanks, WordPress; you’re a joy to work with). If you click on the photo, it will open in the same tab which means to return to the post, you need to hit the “back” button. Alternatively, if you click on the pictures, do so with the “right mouse button” and choose “open in new tab” or “open in new window”. If you are confused by this, then these instructions are not for you.)

Interestingly (or not), the photos are not physically added to the WordPress media library, and hence I don’t think I’ll be able to do a gallery at the end. Which means that I’ll have to post all of the photos as opposed to only a few and adding the rest in the end gallery.

Now, if this is confusing and/or difficult to follow, again, don’t worry about it. Just know there are a lot of photos (40 something, I think) and many may look similar to each. However, rest assured that if a photo appears more than once it’s because it’s processed differently.

If you only fast-scroll and never click on anything, then not only will you have not read the above words, but even if you had, they would mean absolutely nothing.

The flower above is from the parking lot to Tex. That’s right . . . on Easter Sunday, after a busy and tiring week of moving and settling in the new place, we treated ourselves to a drive, a hamburger, a loco moco with brown rice instead of white rice forming the bed for the hamburger patty topped with an egg fried over easy, and four malasadas.

I understand other people celebrated a blood sacrifice; to each their own, I suppose.

I’d not seen one of these flowers with this particular color combination, so I snapped a few other photos . . . although they may look the same.

As I mentioned over and over and over . . . I don’t have my PC so I don’t really have the confidence these are processed to best show the flowers in their natural glory.

I have a Chromebook, two fire tablets, two different phones, and they all show the photos slightly different in colors and details. Plus, those too change if I vary the viewing angle of the screen. All I can hope is that they’re not super crappy.

So, for instance, this next copy of the above looks, to me, different. I mean, it should as it’s not processed the same, but I don’t know if it’s better, worse, or if it makes little to no difference in presentation and color.

In case anyone is wondering, it had just rained so the waterdrops were a fortuitous addition.

This next photo is presented sans . . .

Although these red flowers seldom come out for the better in B&W, I did take this:

I presume some will like it and some not. Wait . . . the B&W conversion is from this shot:

I can see the argument that color is better . . . but, it’s not like the B&W totally sucks. Still, I’m not sure it even works for this subject:

Here’s the color version of the above.

I mean, it’s not like there are a lot of colors there, to begin with. Here are a few more shots.

One of these days I’ll have to do a post strictly about textures.

The original was in the shade so the camera cranked it up a lot, which means I’m limited with what I can do in postprocessing since this is a copy of a copy. Here’s a more subdued version.

It amuses me that I found this leaf interesting . . . it amuses me because the leaf is probably diseased and dying (judging from the healthy green color of the other leaves) and here we are celebrating the fact it makes it interesting.

I initially liked this processing, but now think it’s too stark; too in-your-face. I softened it up a bit, but it looks pretty much the same.

Here’s a slightly different angle. By the way, this was difficult to photograph because it wasn’t in a convenient place. I suppose I could have picked it, but for all I knew, this could have been an ancient sacred symbol of a backward civilization of people currently immersed in social media via their phones but clamoring for a return to the “old ways” . . . you know, when most of the people lived a meager life in service to a king who ruled by fear of death.

Well, screw tradition, I say! Let me show the orchid as it was never meant to be seen!

Them who revel in shallow field-of-view shots probably loved the above photo. Know that it was not intended. 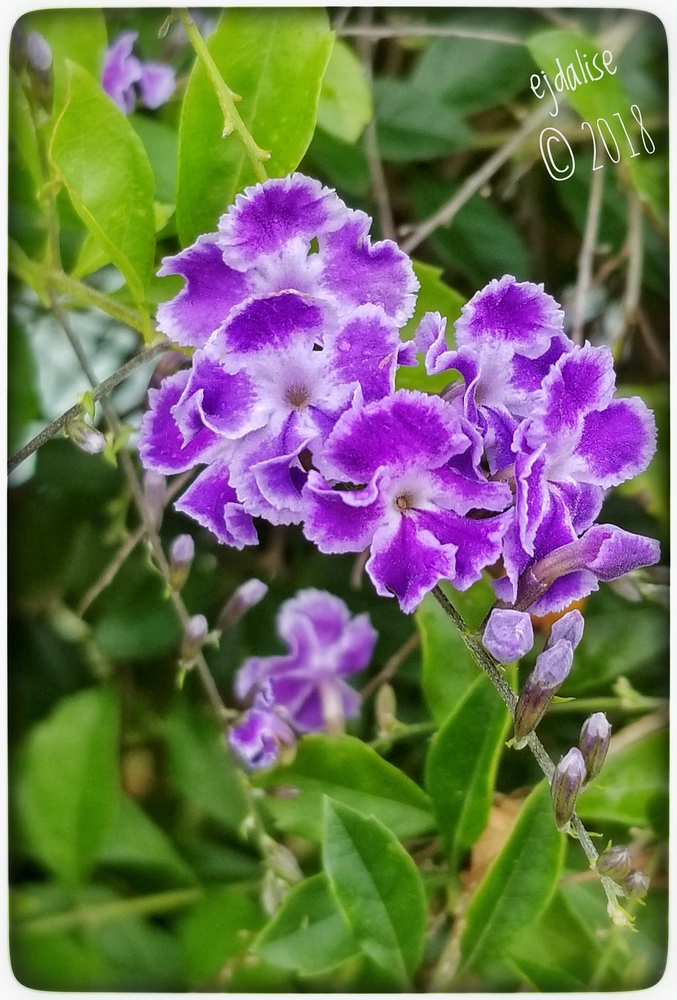 Being forced to work on phones and tablets has me wondering if my readers ever really see the photos I post with the colors I intended.

Here’s yet another version of the same type of flower that opened this post, oh so many moons ago. 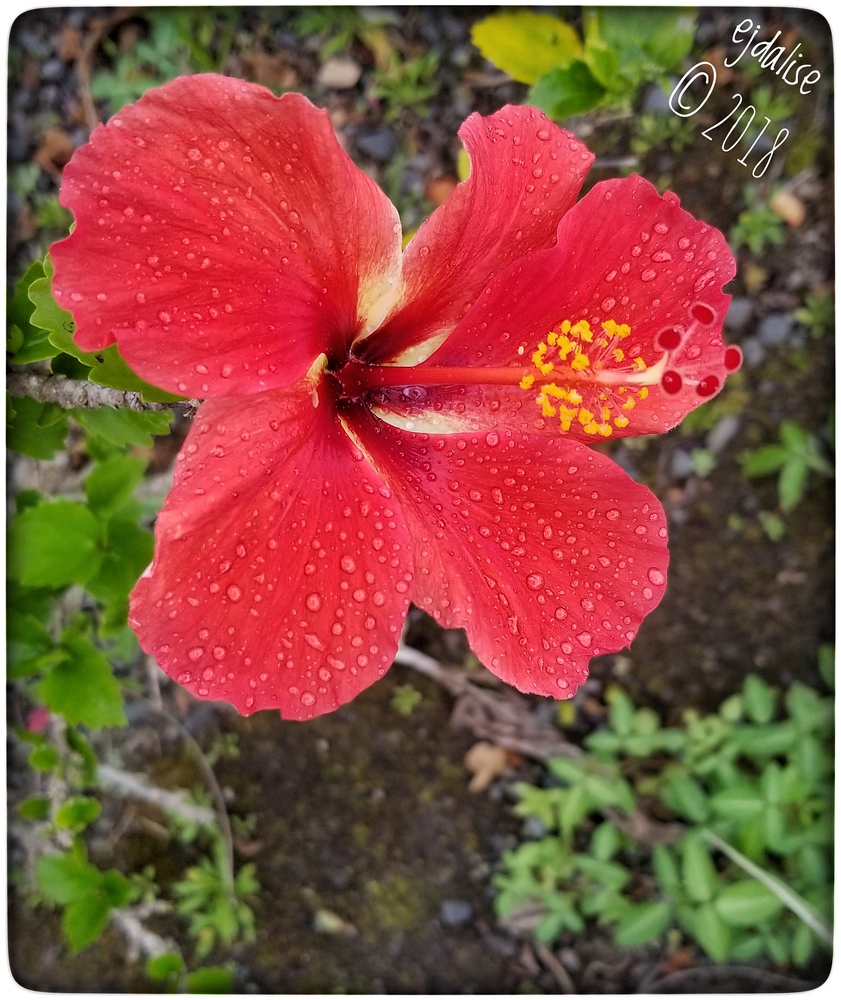 I also saw these:

These were particularly difficult to process because I didn’t quite remember how they were supposed to look (color-wise). They might be bluer than I show here.

Can you tell what’s changed with this next version? 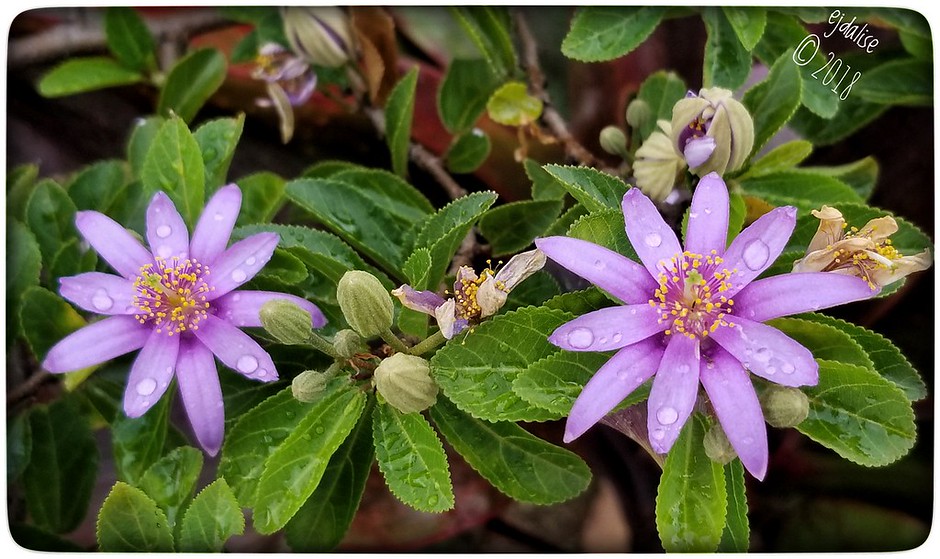 Halfway through these, I found a set of processes that were gentler on the photo while still retaining the impact. You needn’t bother comparing those; just be aware that it’s not that I have duplicates, but rather I often tweak a few knobs and see if I like or hate the results.

Here are a couple of close-ups of the flowers.

Next up, on a little plot of land next to Tex, something I’d never seen before. Carefully, so as to not scare it away, I approached the juvenile pineapple and snapped the following photos. 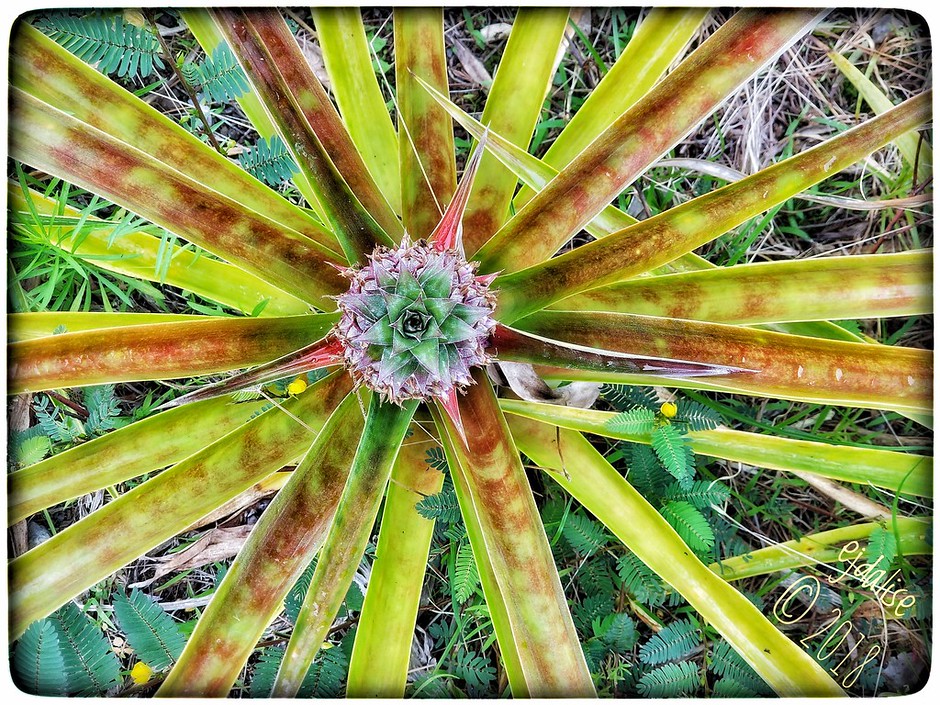 . . . it almost looks real, don’t it? Here’s a blander version of the above shot.

The pattern is nice, but it’s the fruit that was of interest . . .

Of course, I spruced it up a bit; here are blander versions of the original:

I admit . . . unless you see those next to each other, there’s little differentiating those shots.

That pineapple is about four inches tall from the base to the top of its crown. It was so cute that I almost wanted to pick it . . . that would have been bad because it takes eighteen months for the plant to fruit and another six months for the fruit to ripen. Someone would have been pissed had I followed through on my impulse.

Somewhere in one of the boxes I moved sits a book on the Plants of Hawai’i . . . but since I have not the interest, I’m not digging through boxes just to tell you what this next plant is.

Just know the shot is perpendicular to the ground and that I wish the grass forming the backdrop would have been nicer. 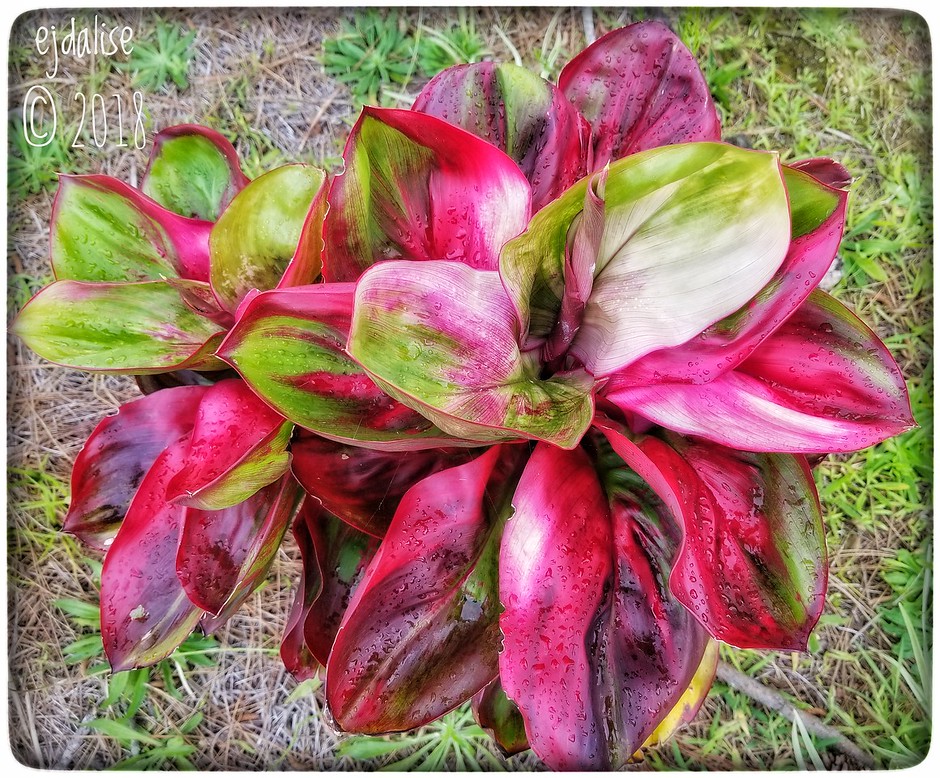 These next flowers were the last I shot at Tex. They are small and looked to be wild as opposed to cultivated. They remind me of some flowers that I used to plant but whose name now escapes me. 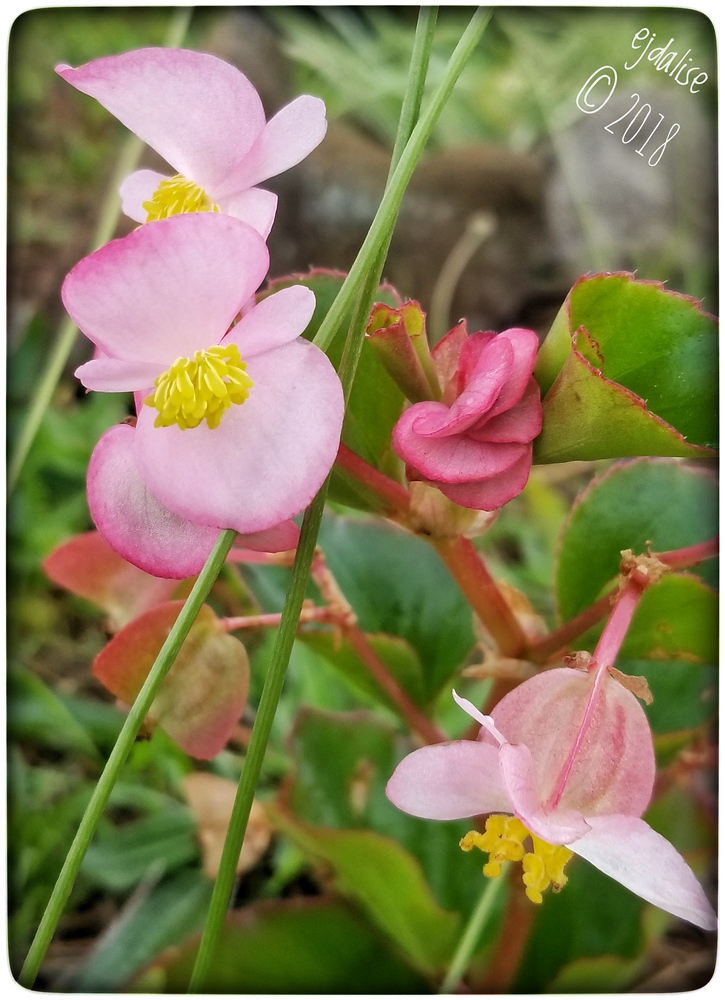 When we got back to the complex, I took the time to shoot a palm leave that offered a striking visual to the surroundings. Warning: I have multiple versions and processing of this frond. 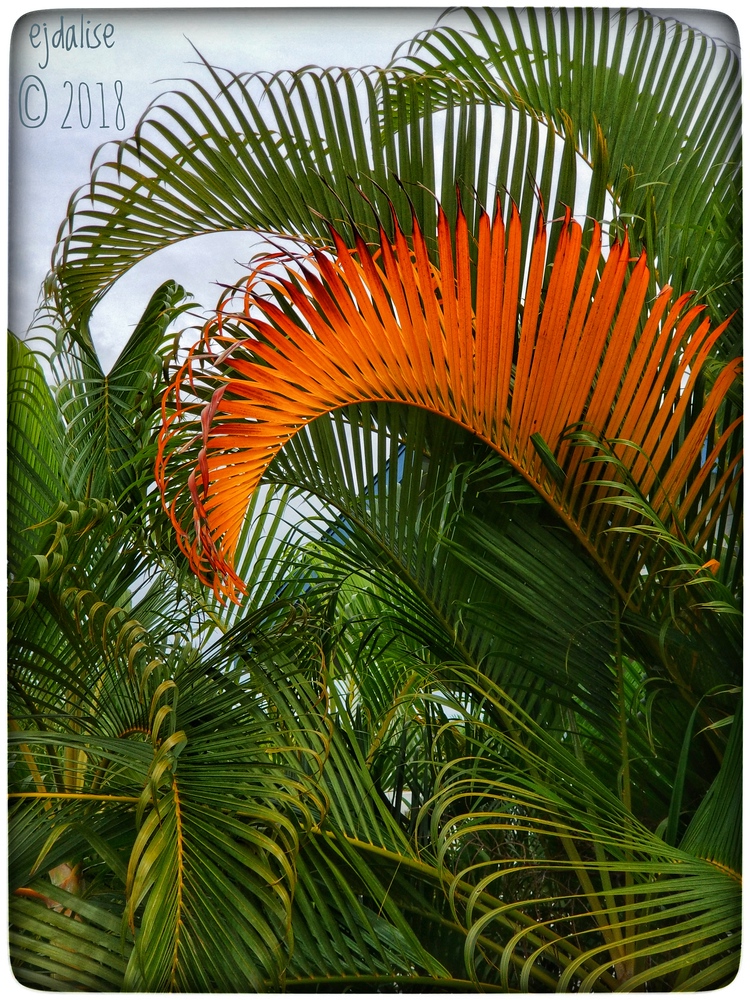 Finally, after dinner, and before sunset, we strolled to the water to watch a few waves. I’ll post a few of the videos I took, but not here. Here, I’ll post the flowers I shot on the way back to the condo.

And, that’s it . . . that’s the end of the post. Sorry to end on what look to be pretty bland photos.

Here’s a video to make up for that:

I don’t have my usual disclaimer, but just imagine I do . . . or go to an older post to read it.