Posted on 26January2018 by disperser

This is my third book review and it’s a murder mystery tale. Well, I don’t know what it is, exactly. Perhaps it’s mystery-suspense but it does have murders in it. The main hero is an FBI agent and the plot is pretty good as is the writing. 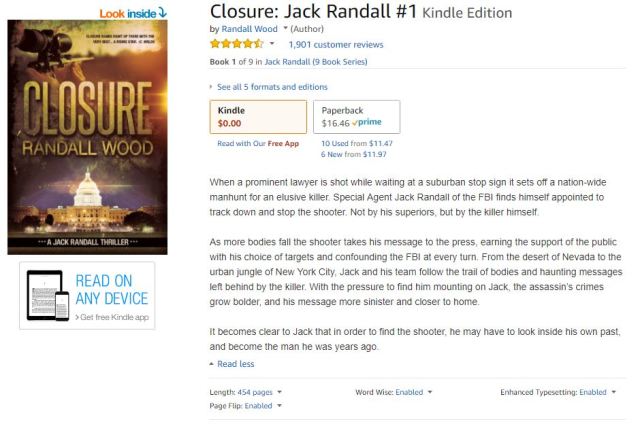 I had previously said I would go in reverse order to my reading, but some of these books end up blending into each other and I don’t remember exactly the order that I read them.

Also, I’ve had two not-so-flattering reviews and figured I should do a review of a book I liked and that kept me interested.

This is another self-published book (one of a series) except that this book was done right. Well written, good editing, tight plot and engaging characters. Randall Wood came up with a decent premise that he executed — in my opinion — pretty well.

The plot takes a careful trip down the exploration of vigilante justice by someone with little to lose. Jack Randall, the titular character, is an engaging character even if introduced as a bit larger than life. The secondary character is the killer and he, for me, was the more engaging character. I would almost call him the hero of the story and — except for a few scenes where the hero mask is allowed to slip a bit — that carries through to the end.

I can’t speak to the inner workings of the FBI and if they are accurately presented but given their many faltering steps in the real world, they’re here presented in a pretty good light. 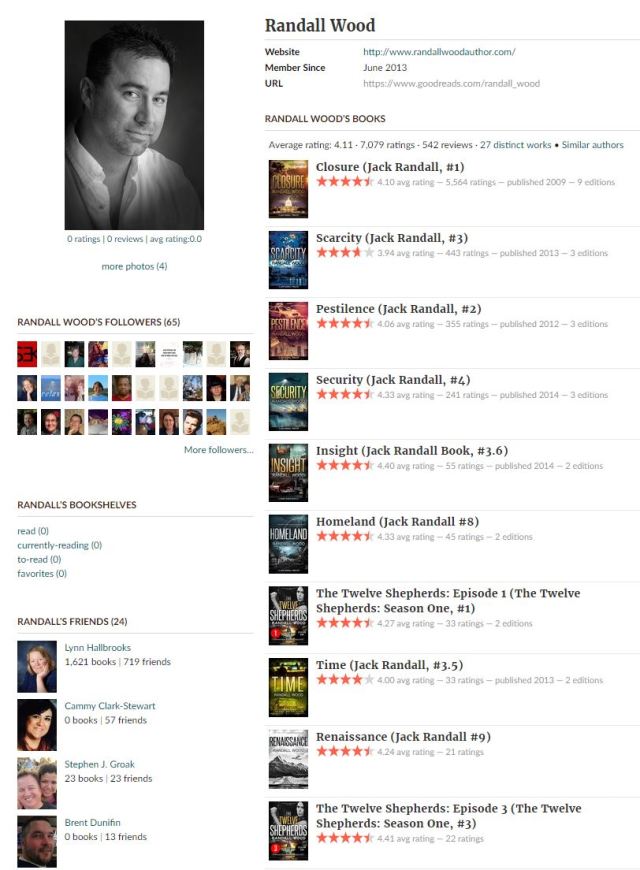 There are, occasionally, a few too many details for my liking but they are not super-annoying and they do lend credence to the action scenes.

I also like that the personal lives of the protagonists were hinted at but not explored. Especially, the author resisted the common trap of the male-female professional relationship devolving into anything more. That said, he also laid the groundwork for that relationship to potentially drift into the personal in future books but I hope they don’t. I don’t know and at this point, I don’t care as this is the only book I’ve read.

Lest people gag over what they might consider effusive praise, there are some things that I didn’t particularly like. The killer (and hero) of the story starts out as ultra careful and methodical but becomes less so in short order, thus allowing for the FBI to catch some breaks and zero in on the culprit. There was also a hint of the killer’s motives being personal but by the end of the book it seemed a more sweeping and nobler reason for his actions, namely, the revamping of the US criminal justice system. Yeah, good luck with that.

I mean, the book touches on what I think is evident to every person living in America; if you have money you can get away with almost anything. Meaning, while it’s a system, justice plays a small role in the workings of it.

But, back to the annoyances . . . some of the breaks they (the FBI) catch are pretty far-fetched. One that annoyed me was a woman seeing the killer for a few seconds in a stressful situation and helping the FBI get a sketch and giving them an accurate and detailed description. Perhaps she was a savant, but for the length of time that she saw him and based on what he was wearing, I don’t think that was realistic.

The other thing is that while the killer is careful and has some basic knowledge of how to cover his tracks, he makes pretty basic errors, like buying his supplies all at one place (Home Depot). Strange that because for everything else he got, stuff was bought and ordered at different times and different retailers. It almost came across as an advertisement for Home Depot.

The other thing is that the killer (and his brother) seemed unaware of the possibility of cellular phones being monitored. It’s a clever twist, but even long before the public confirmation, there were fairly strong rumors (and for many years) that phones were being monitored. This also involves the introduction of a character with amazing programming skills to the point that he invents technology on the fly that leads the FBI to the killer. That, to me, was also far-fetched. Probably not outside the realm of what a team of developers would be able to come up with after a few months of programming but, whatever; I’ll give him some artistic license in that.

The other gripe I have is the ending. Let’s just say that it was a bit contrived. I mean, it’s a work of fiction, but the stuff that had to happen — and not happen — stretched my credulity a bit. I understand why he wanted it to end that way but still, I wasn’t happy.

Again, a part of my displeasure is that after all the careful planning and stuff, both the killer and the brother seemed less than astute and more careless than they were at the beginning of the book.

There was also a very protracted and largely uninteresting and non-crucial part involving paramedics trying to save a shooting victim. This is in the book — I presume — because the author worked a stint as a flight medic. If you are interested in highly detailed descriptions of emergency medicine, you will enjoy this part. Personally, I didn’t see the point of it.

However, despite the slightly disappointing ending, I reiterate that I did like this book. An ending that was well-telegraphed ahead of time only slightly reduced my enjoyment of the reading experience.

On a personal note, if I were to self-publish, this is the kind of quality I would strive for as far as characters, plot, editing, and general presentation. This felt like a professional offering and in fact the author hired professionals to present the book to his audience.

What I don’t know is how confident he was in investing what must have been serious coins into the production of it without knowing how it would be received. It could be that his first release was not as slick as its present form and that the book has undergone significant improvements from its initial offering (this is the 9th edition).

The book is offered for free and in this case, it’s not a bad idea since based on the quality of the offering it would likely translate into a good number of readers buying the sequels. No, I’m not one of those readers but then I’m a special case and not representative of typical readers.

If you are looking for something to read in this genre, it’s worth checking out this free offering.

My disclaimer:
Not much of a disclaimer for this review; I liked the book and consider it a decent offering. Any criticism of it relates more to my own personal preferences in what I read and doesn’t point to faults in the book itself. If the book sounds interesting, you should buy it (it’s free) and then let me know what you think.

Anyway, this reawakens my desire to finish editing my own suspense-action-thriller-mystery offering and get it out there, although I would first try to sell it to a regular publisher.