Posted on 18November2017 by disperser

I almost have the writing bug again. Almost, but not right now. I do have two ideas that are rattling around my brain, but they need to jell a bit more. Interesting side story . . . both ideas came to me while I was half asleep (drifting, as I call it) pretty much in the middle of the night and after my deep sleep. I usually lose those . . . but, Note 8 to the rescue. If you pull the stylus, you can just start writing on the screen. Conveniently, it’s black, so it doesn’t blind your darkness-adjusted eyes. Anyway, I jotted down my ideas and I had them for when I was fully awake. Soon, you’ll be able to read the result . . . I hope.

By the way, that’s what three eggs, some milk, Half & Half, and a pinch of salt looks like before it’s whisked into French Toast batter.

Say, do you remember THIS post? It had this photo in it. 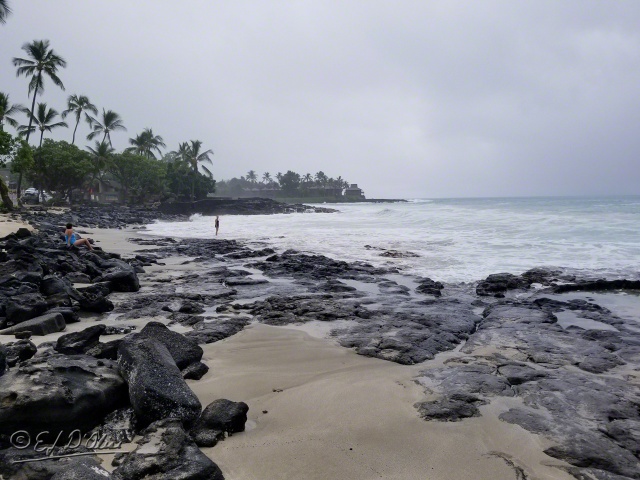 Here’s a video from that day (October 25th)

Well, on November 10th, I took this video:

Here are a couple of stills from that day . . . 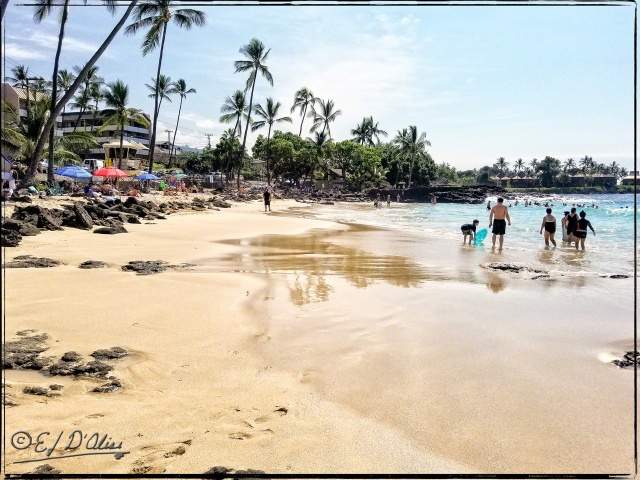 You’ll notice the difference in tonal quality between the video and the photo. I did process the photo a bit, but only a bit. Subsequent to that video, I played around with some of the settings for taking videos and you’ll see below that it made a difference.

Before I get to those, here’s a shot of one of the churches on Aliʻi Drive. 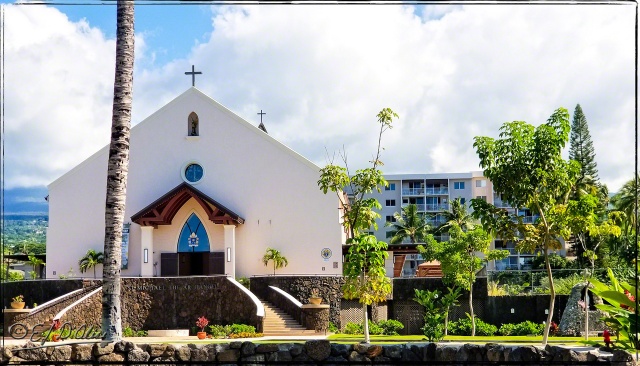 This was snapped as I sat in the car, waiting for construction-related traffic to clear.

By the way, these photos are all in the Samsung Note 8 SmugMug Gallery HERE.

Anyway, keeping the last beach photo in mind, here’s the one from the 15th.

As you can see, most of the rocks are covered. Unless we have another storm, the sand will just keep building, leveling the upper tier and reducing the length of that beach slope.

Here’s an interesting thing that surprised me. Along with the above photo, I had shot two more . . .

I didn’t take particular care to line them up or overlap them, and they weren’t taken with the idea of making a panorama . . . but, that’s what Google Photos did on its own. I got a message asking if I wanted to save it. I said yes, and here it is:

The full-size version can be seen in the SmugMug Gallery OR you can click HERE and it will open a 6700×2400 pixel photo in a new window or tab (6MB – don’t click unless you have a good internet hookup or lots of data in your phone package).

Of course I have video for the above scene!

This next video is three-and-a-half minutes long. The original is 44 seconds long at normal speed. If three minutes is too long for you to watch (gosh, you must be busy!) the subsequent videos are shorter.

And this next one is only 45 seconds. It has a nice initial wave.

Remember I mentioned that Google Photos has an assistant that will assemble videos (slide-shows) for you and ask if you want to keep them? Well, The Gallery app on the Note 8 has a similar thing. In fact, it created a bunch of “stories” dating back to 2005. I won’t show them all, but I have to share a few.

This first one is from Feb. 1-2, 2014, while we were still living in Monument, Colorado. This is the exact version the app produced.

I thought that music was rather funereal.

I went to the next video, and it had the same music. This covered photos from July of last year.

Around this time — not wanting to get a noose and hang myself — I explored under the hood a bit. It turns out you have your choice of themes and music. In this next video, both the theme and the music were selected by me.

OK, this was a bit better, but I still thought the music was no match for the graphics. By the way, I don’t control when all the various effects come on.

I thought I could do even better, and came up with this . . .

OK, a little corny, but it’s not awful. If anyone is interested, that compilation uses photos and videos that I used in THIS post. The videos that look “weird” are negatives of the originals.

Really, there was only one video that I really liked and for that one, I went and found a piece of music that was more suitable for it. The music itself is licensed under a creative commons license, hence why I’m able to use it. I mention this because the music I had picked from the “free” selection under the Gallery App, was immediately claimed by someone on YouTube and they then get to run ads on my video (because I’m using their music).

Now, I’m pretty sure that music is not copyrighted, but rather than argue with them, I canned the original video and posted it with this music which — in my opinion — is more appropriate.

You might notice some of the videos have a better quality than others. It depends on what photos the automatic process grabs. I usually have two versions of the photos. The original and the ones that I post on the blog when I travel (and hence have a lower bandwidth). If they pick the smaller photos (as they did in a couple of the movies) the quality suffers. That last one used the higher resolution photos so it’s not too bad.

Ok, that’s enough for videos for a bit . . . let me turn to the drive we took Thursday. We hadn’t been to Hilo for a bit, so we took a ride out there. Of course, we ate at the Cafe 100 and I had my favorite . . . a Super Loco. Here are photos I showcased in THIS post. 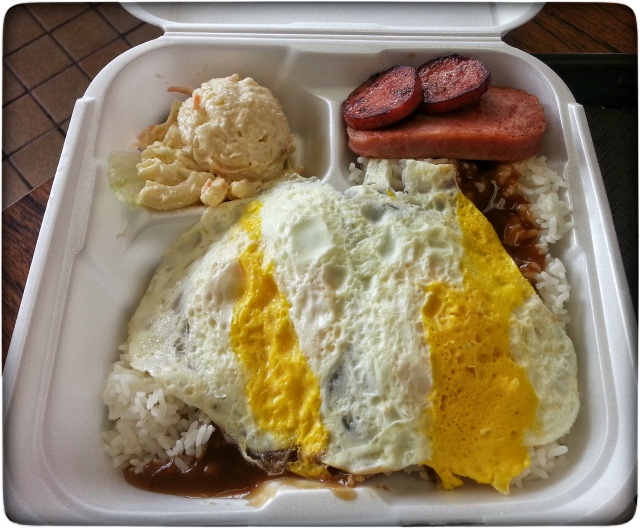 There were no leftovers.

We then took the opportunity to drive up along the East side of the island and stop at Tex for some fresh malasadas. 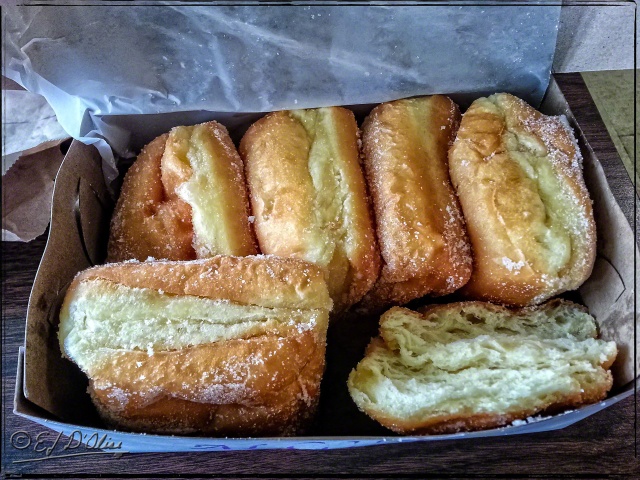 That photo is from THIS post which has more photos from Tex.

The east side of the island is prone to more rain than Kona (a lot more rain) and Thursday was no exception. 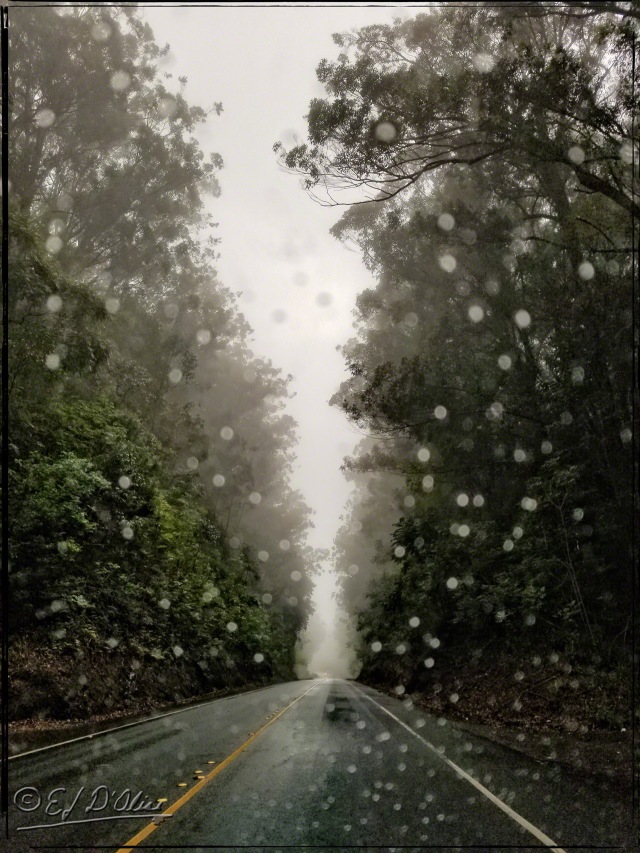 Yes, I can drive, snap photos, and drink coffee, all at the same time.

This stretch of road — immediately after you leave Tex and head North toward Waimea — is one of my favorite on the island because of the tall trees. The fog/rain just adds to the beauty of it. 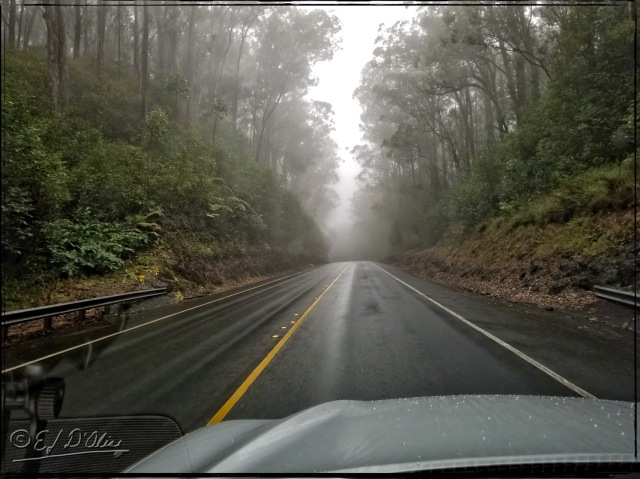 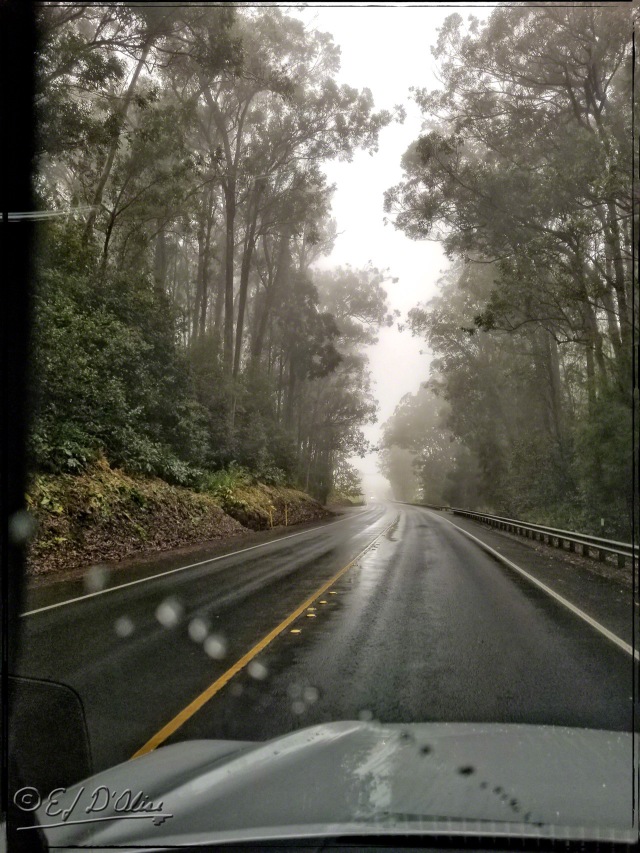 Even after leaving the tall trees, the scenery is enhanced by the clouds coming up from the valley below.

Of course, that just makes me want to go faster because if I can’t see a cop, they also can’t see me.

Oh, you know what? There are two more videos. We actually went inside a mall while in Hilo. These two videos were shot inside there.

I guess there’s something about joining groups and socializing because these people seemed to be enjoying themselves . . . still not for me, though. All that smiling would just tire me out.