Posted on 12September2017 by disperser

Note: I have no idea when I’ll be able to post this. The town of Whittier only managed to provide me with a 3G cellular signal. While that was sufficient a few years ago to let me post at nearly every port of call, it’s now insufficient for me to even load one photo. I’m composing this and when I can, I’ll add the photos and published. But, it could be no one will hear from us until we get back to Hawaii. And, won’t that be awful.

I like this airport. It’s small, easy to navigate and it has a few things for me to photograph as we wait for stuff to happen. Specifically, getting on the Princess Cruises bus that will take us to Whittier and the Coral Princess, the ship we will be sailing.

That’s a big ainting that I’m photographing almost straight up. That’s why it looks wide and short. In actuality, it’s closer to being a square, but due the shallow angle, you get this squashed panorama look. It’s a nice look just the same.

Next up, a piece of etched glass. Or, perhaps, plastic. You never know these days. Whatever it is, the backlit effect is something I liked and photographed. As it turns out, fish art is something that you see a lot up here in Alaska. I guess they have a lot of fish.

The area where we waited had a display of stuffed animals. Mind you, these are not stuffed animals for kids; they are actual animals that were killed, their inner squishy stuff replaced by some sort of dry stuffing, their eyes replaced by eye-like marbles, and mounted behind a plexiglass so that people might admire the wonder of nature.

This could be a relative of the guy that kept us company as we ate out dinner just the previous evening. I wonder if they appreciate the irony of me seeing them both and pondering their lineage.
I did a bit more than that . . . I played around with Pixlr and came up with this variation.

Next up, an albino beaver. 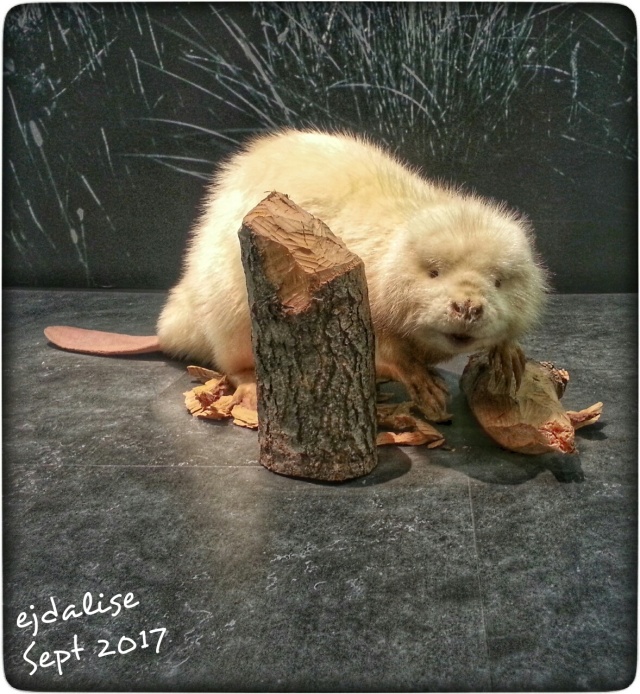 I wonder if the pieces of wood in the display were actually chewed by live beavers or if some guy took a stab at coming up with something that looked vaguely like beaver-chewed-wood. Of course, most people — including me — would never know the difference.
I played with that photo a bit, giving it a more dramatic look and in the process making it more albino-like. 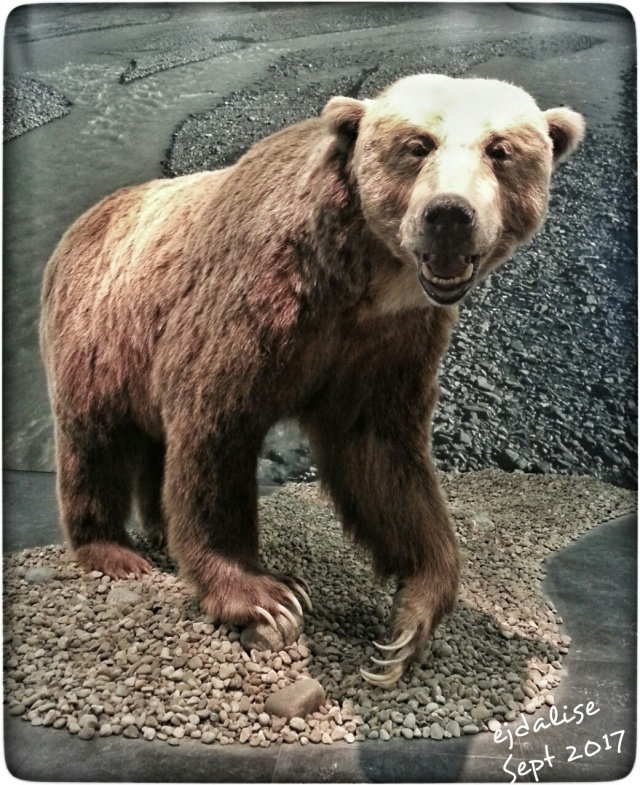 I tried teaking the photo because I didn’t like the way it turned out. The lighting was harsh and some of the hues were not quite representing correctly in the photo. 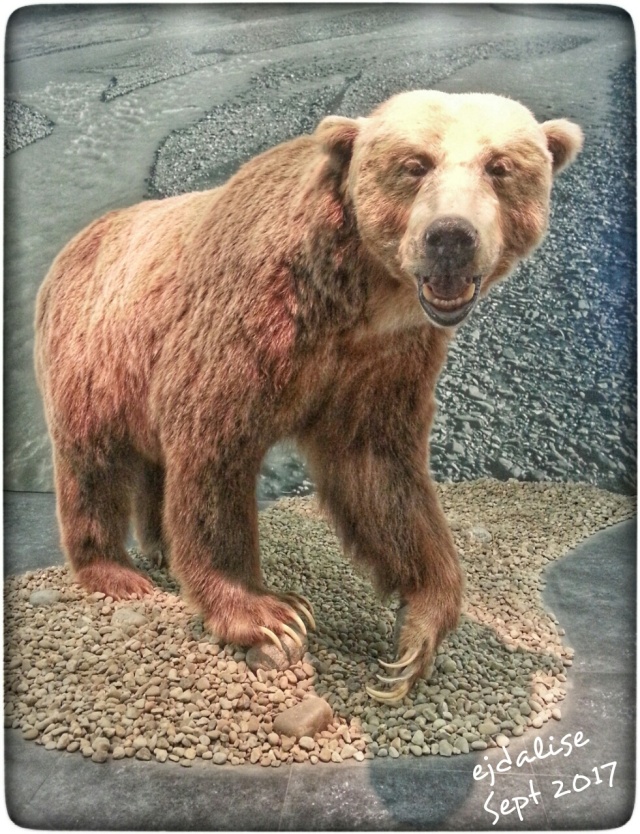 Guess what? This is not much better. What you need to do, dear readers, is imagine a National Geographic-like photo in the place of what I’m offering up.
By the way, interesting factoid . . . If you get attacked by a black bear, your best chance of survival is to fight back. Not so with a grizzly attack. If one of these guys (or galls — don’t want to slight lady bears) attacks you, your best bet is to curl up and play dead as you protect your nead and neck.

So, here’s the thing when I read stuff like that . . . I’m thinking my best bet is to walk around with a Ruger Alaskan. And, that’s only if I can’t carry an high-power rifle.

Next up, we have Smiley.

I think it’s actually meant to be a snarl, but I think the effect is not quite what the taxidermist intended.
Then, there were these guys (actually, a guy and a gal) also waiting to board a plane. Beautiful animals. I asked the owner if I could photograph them. The closest dog got up and approached. The owner said to not get near it as it would bite me. I heeded his advice.

Actually, it was refreshing . . . invariably, most dog owners will say something like “Oh, don’t worry; my dog doesn’t bite.”
I’m then always reminded of Peter Seller as Inspector Clouseau (sp?) . . . If you are a Pink Panther fan, you’ll immediately know which scene I reference.

Shortly thereafter, We boarded a bus that would take us to Whittier. I can’t do a link here, but it’s an interesting town to look up. For one thing, the only road in shares a tunnel with the train tracks. The tunnel is 2.5 miles long and 18 ft. Wide. A tight squeeze for the cruise busses. Since it’s a single lane tunnel, traffic switches on the half hour. First one way, and then another.

I will have a a video of the crossing once we get back to the condo. Meanwhile, here’s the sight as we exited the tunnel: 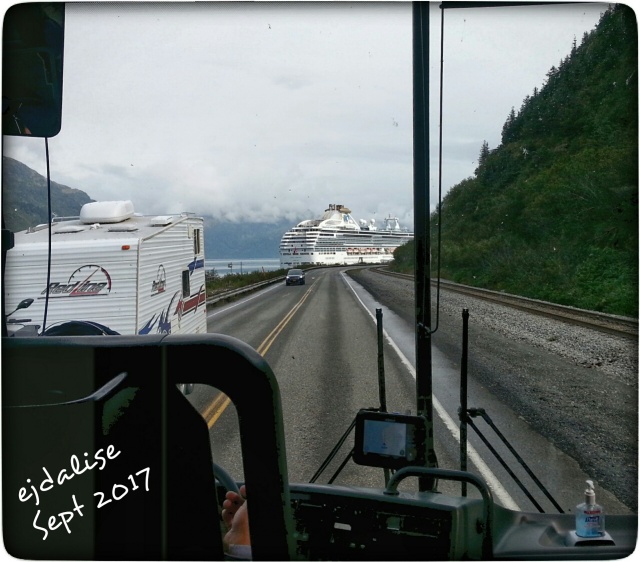 So, by some twist of (good) fate, we were the first ones of our group to board the ship. We breezed through the check-in thanks — in no small part — to Melisa’s organizational skills when it comes to planning a trip. We had all the paper and vouchers ready and within a few minutes were going up the gangplank. No one was even in sight behind us.
We went to our room . . . 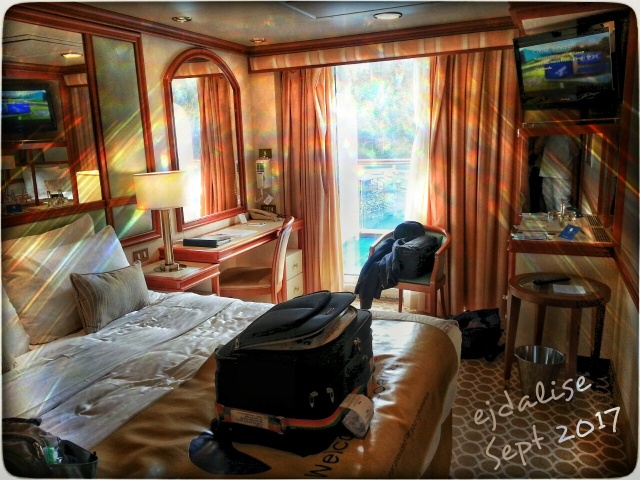 The bathroom and closet are small but serviceable. 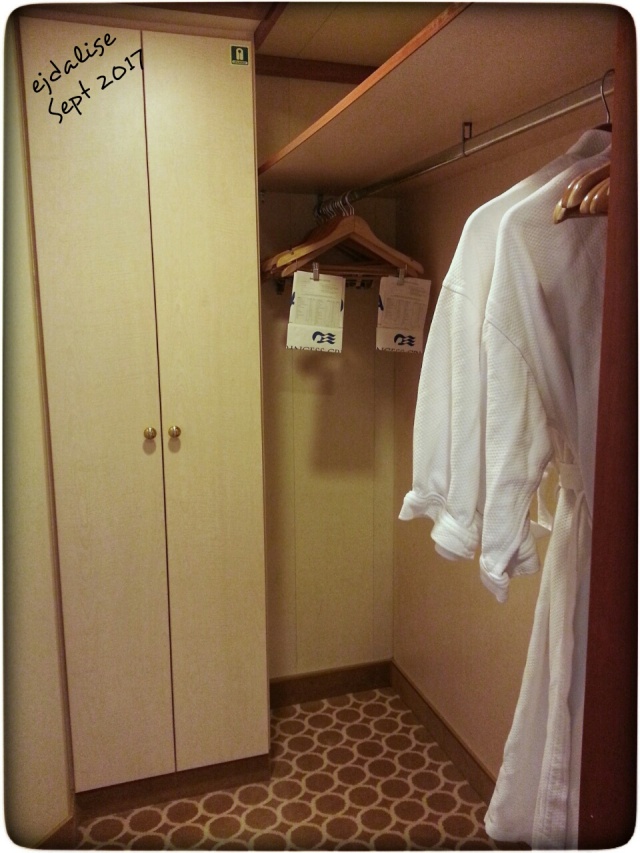 However, the shower is not much bigger than I am (I’m talking circumference). Frankly, I don’t know how bigger persons can use it without getting water all over the place as they get intimate with the shower courtain.

We didn’t tarry long before making a beeline for the Horizon Court . . . The Food. I don’t plan on taking many photos of food because you can’t eat and take photos at the same time.

Here are a few shots of Whittier. 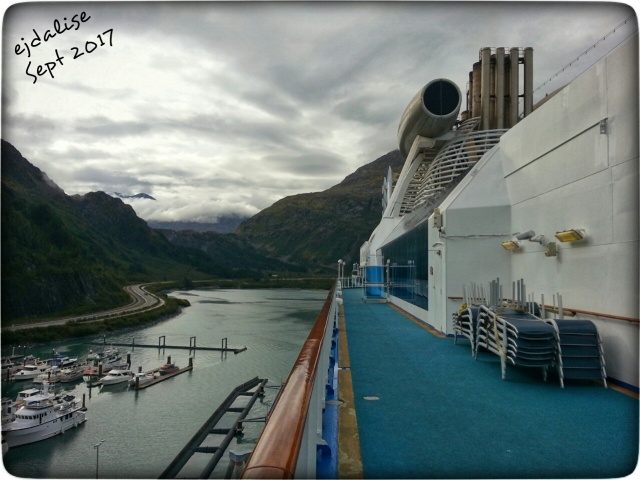 See the colorful building in the back? The entire population of Whittier lives in that building. Look up the write-up on the town. It’s interesting.

As I finish this, we are in Haines because of a problem with the pier in Skagway. Yesterday we did Glacier Bay. Lots of nice photos and excellent weather.

I’m hoping this will post before we leave tonight, otherwise it will post tomorrow while in Juneau.

Odd guy with odd views living an odd life during odd times.
View all posts by disperser →
This entry was posted in Alaska 2017, Cruising, Travel Stuff and tagged Alaska Cruise 2017. Bookmark the permalink.