Posted on 29September2016 by disperser 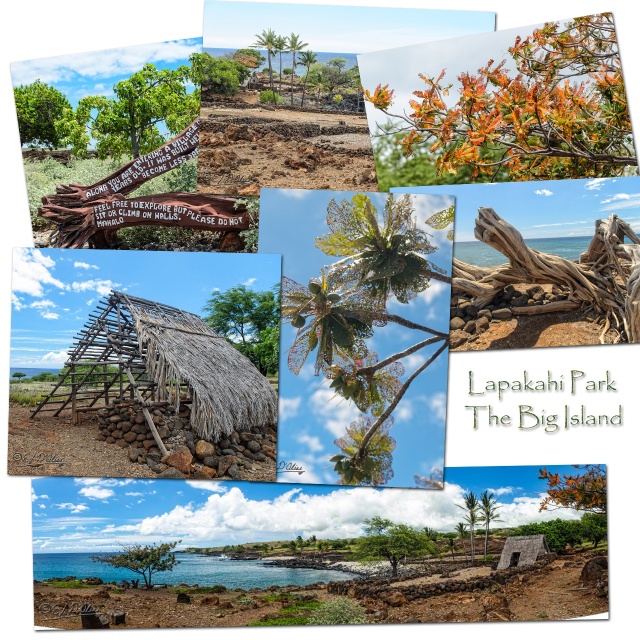 As usual, you can click on any photo to see a version roughly twice in size as what is shown here (it will open in a new window). Also as usual, click HERE to visit the corresponding SmugMug gallery.

These photos are from early August. Yes, just a few months here and I am far behind in documenting the Big Island sights.

About Lapakahi State Park . . . we thought it was a new park because we’d never visited it before. But no; it turns out we missed it during each of our visits going back to the early 90s. Even now, we almost drove by it because many of the “parks” are nothing more than places where locals swim in protected coves. 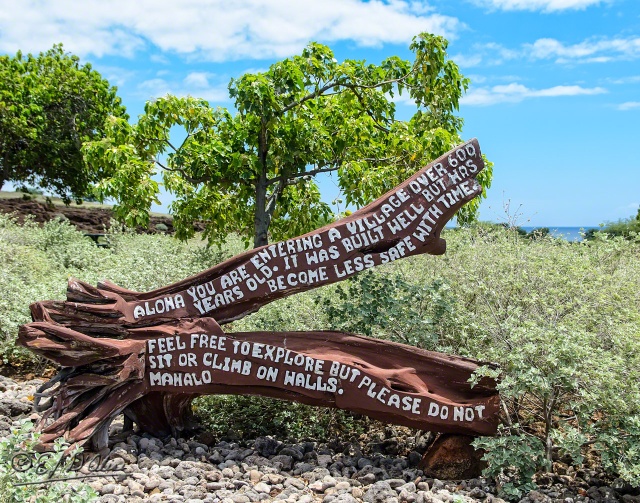 So, here is the information on this park: the Wikipedia entry, the official site, and — the most useful — the PDF of the brochure. I’m actually going to upload the file and provide it HERE because I’ve noticed stuff tends to disappear from websites about local sites. I’ve run across many instances where a link is provided, but when I click on it, I get the dreaded Error 404.

Anyway, the park is on the North Kohala Coast:

Here is a satellite image  of the place courtesy of Google Earth:

The bottom center of the photo is the visitor center. The trail through the ruins is a half-mile loop. The log sign photographed above is at the entrance of it.

These are the signs at the beginning of the trail, and you also get a little map with descriptions corresponding to the numbered displays. 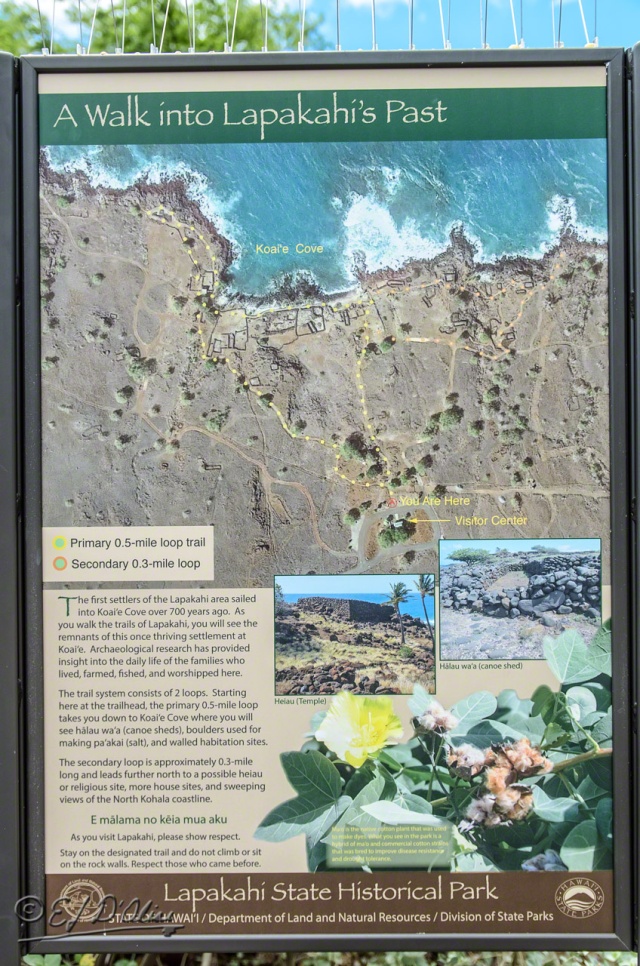 That information and more is contained in the brochure linked above.

I think most of the buildings are reconstructions, with perhaps one or two maintaining portions of the original construction. 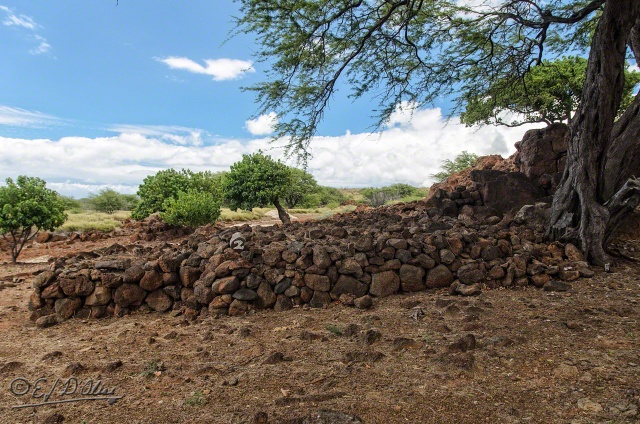 There are a number of these piles of rocks arranged in rectangular or square shapes. I thought some of them might have been foundations for structures, but no . . . most are burial mounds.

Jutting above the distant clouds one can see Maui. Specifically, Haleakala. I wrote about it HERE, but since I used Google Docs and Picasa, and since Google can’t stop changing stuff, some of the links contained in that post may not work. One of these days, I’ll have to redo all of that in a proper post.

Anyway, I’m still surprised when driving and see a mountain in the distance, across the water.

This next photo does show what remains of an original house site. 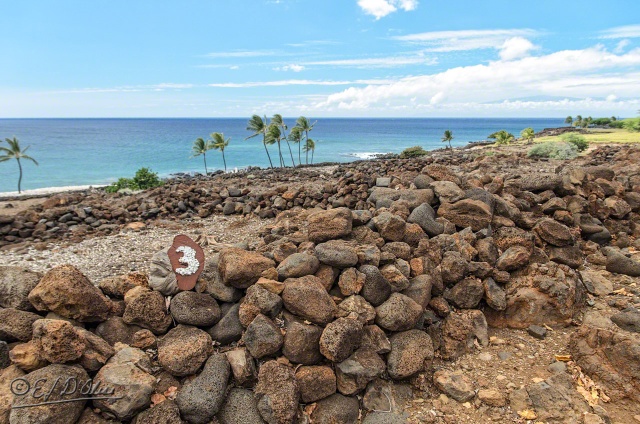 I think most of the walls have been repaired and shored up . . . 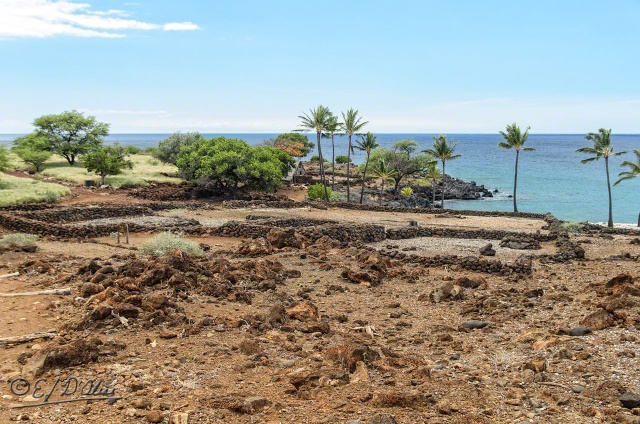 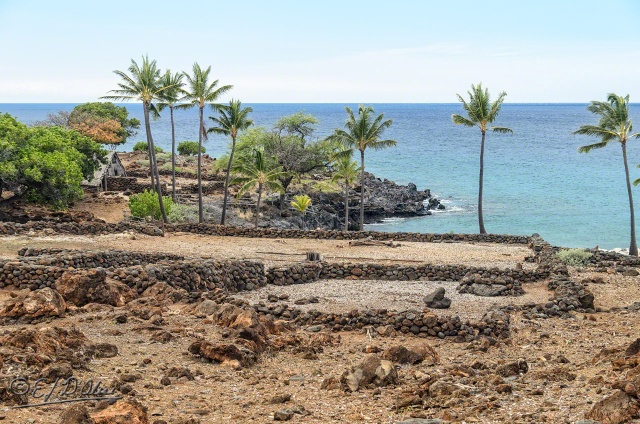 Especially considering the number of tsunamis that must have hit here in the last 600 years.

I never tire of distant mountains . . .

This next area is supposed to be where they dragged their canoes when not in use.

Call me skeptical, but there were two things that made me so . . . one was the small opening, and the other was the distance of this structure from the shore. But, what do I know about storing canoes? Nothing. Absolutely nothing.

The shoreline offers — as most shorelines in Hawai’i do — lovely panoramas. 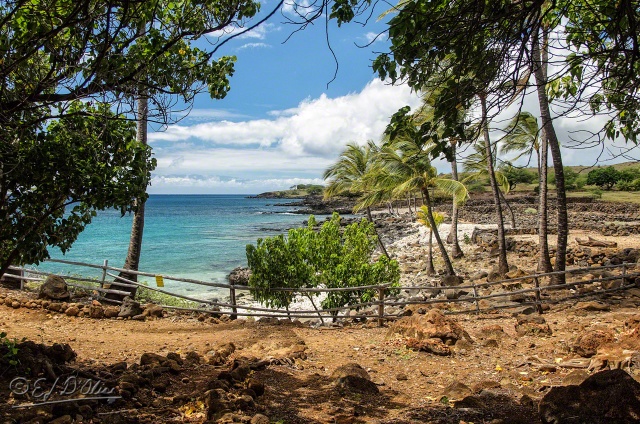 I can see why they picked this place.

This next structure, as you can read in the brochure, was inhabited until the 1900.

For them who want the full-size version, click HERE (7 MB). For some reason, I had trouble putting this together, and the full version is not as good as I would like it.

Here is another shot of the structure and a table and chair.

You can’t see it well in the above photo, but the leaves of that tree look like this . . .

I had seen a number of what I thought were decaying leaves on the ground — and they are, in fact, decaying — but they look like that the picture below while on the tree as well. 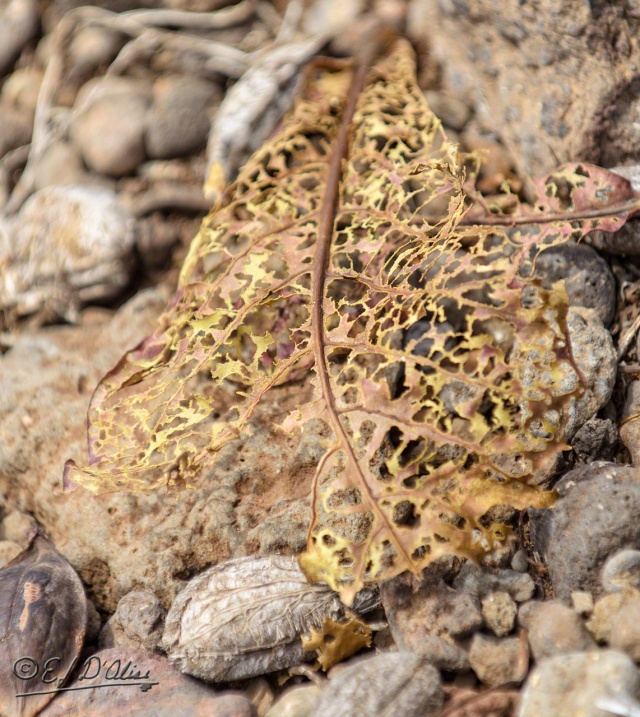 I’m wondering if that’s the result of wind-driven sea spray.

Here is a more detailed view of the structure . . .

And here are some of the rocks by the shore . . . lots and lots of white rocks (could be coral) on their own and dispersed in the lava.

Because there were so many white rocks (coral) I wondered if they were purposefully dumped there to facilitate drawing the canoes out of the water. As opposed to drawing them out over the jagged and much rougher lava. Eh, I’ll call that a win on my part until I hear otherwise. 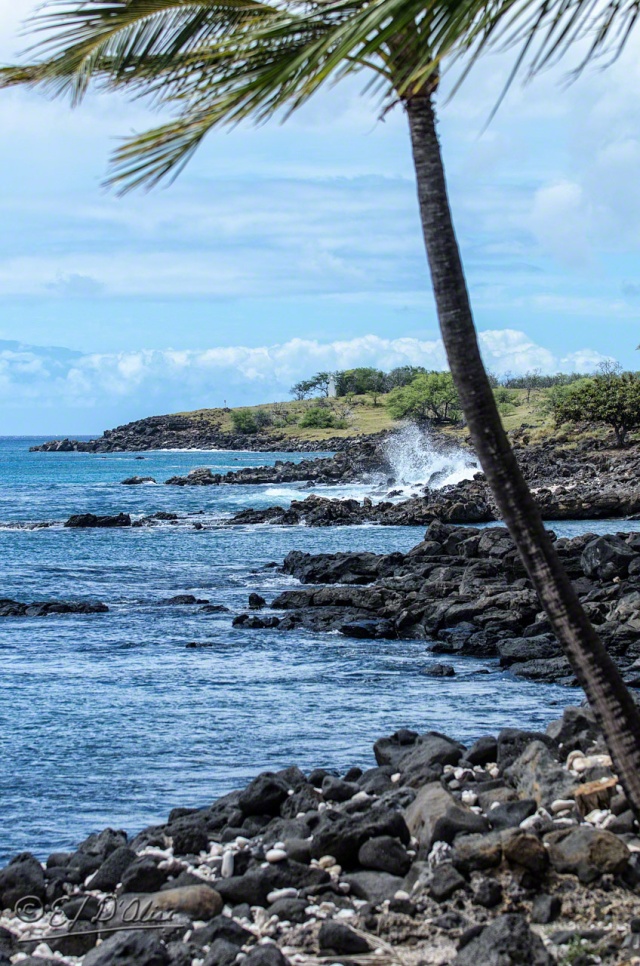 If one looks atop the next hill, there sits a lighthouse. I’ve not found any information on it. On my next visit, I will endeavour to walk right up to it and make its acquaintance. 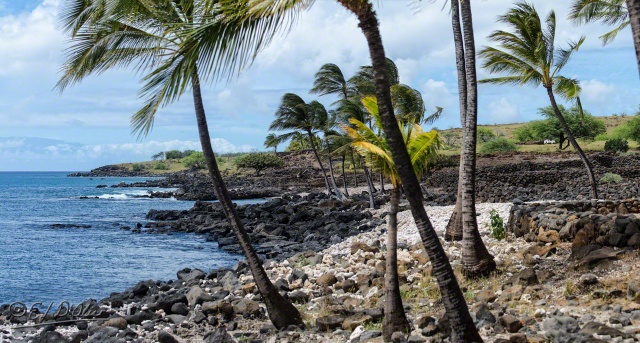 There are neat pieces of wood, driftwood, and neat rocks all over the place . . . 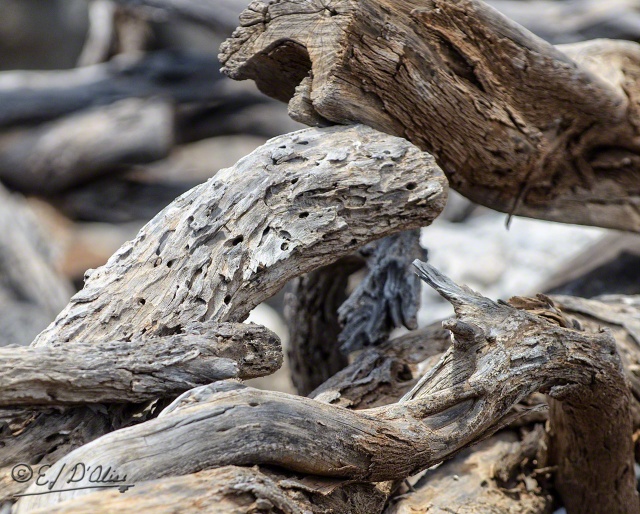 And, of course, scenery. 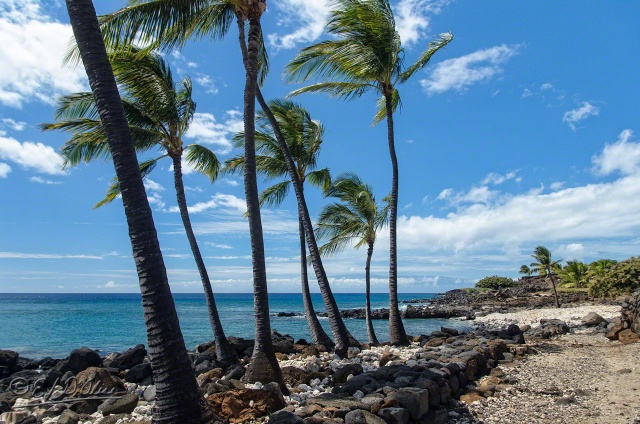 This is where I came across more of the trees with them holey leaves . . . 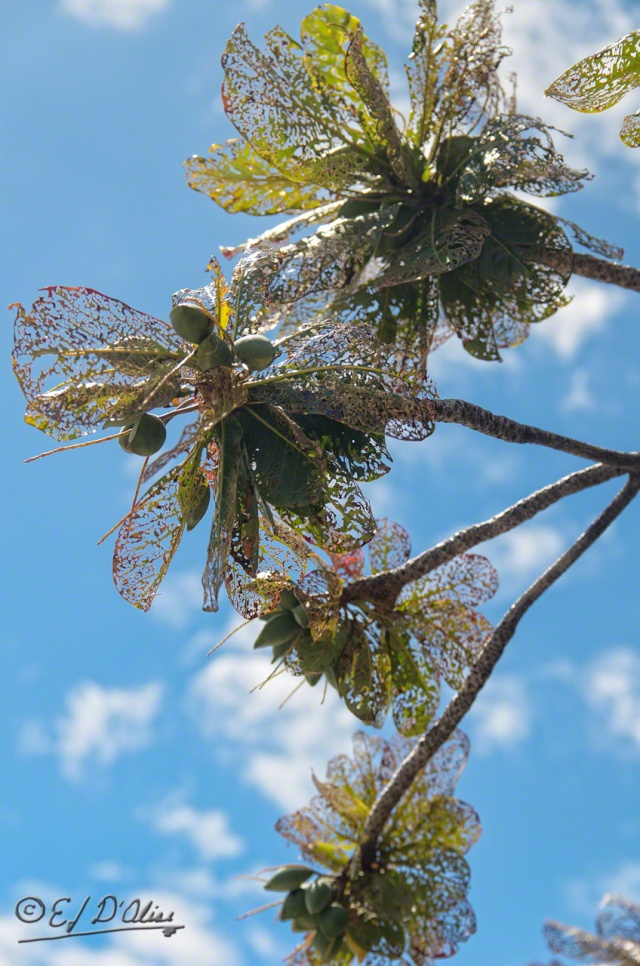 Amo haf to find out what they are (there are fruits on them branches) . . . some other time. 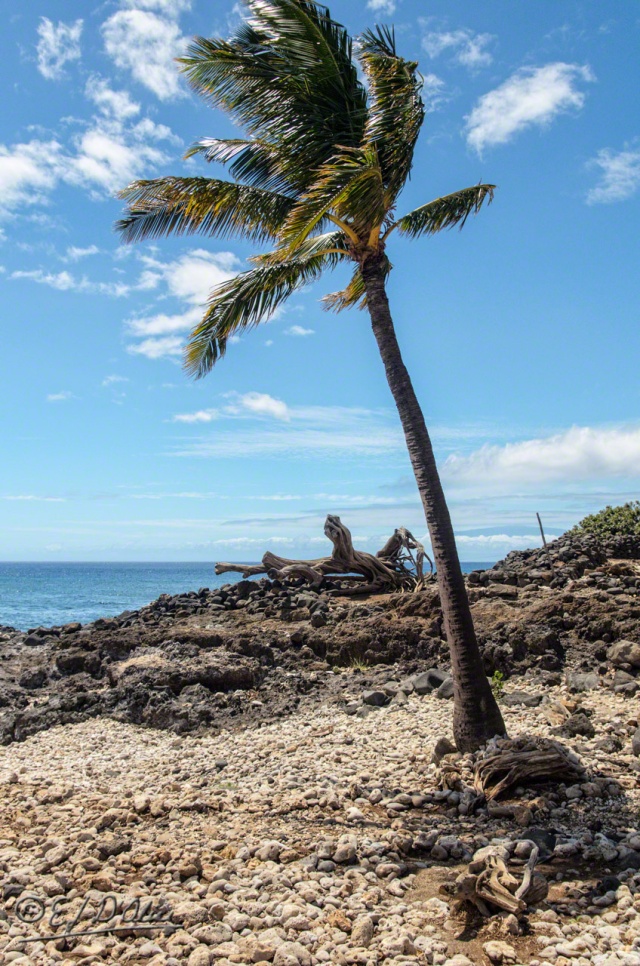 Here are a few more shots from the other side of the bay . . . 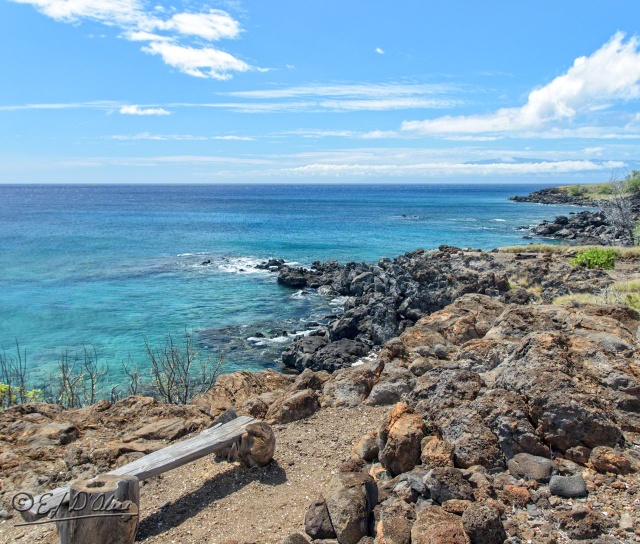 We had a nice time here, but we did rush a bit. As this was an unscheduled stop, we had not put on any sunblock, so we did not linger as much as we would have liked to. Next time.

Before I go, I want to mention something . . . the park is a protected and cared for place, but it’s by no means the only place where one can see ruins of past fishing villages and dwellings.

I often scan Google Earth for places to visit and things to see, and not all that far from the above site, one can see this from above.

Note the remnants of structures, some still very well defined, dotting the shores. This is along an arid section of the Kohala coast, and hence not developed to the extent that other areas have seen the encroachment of new houses and subdivisions.

I wonder how many sites there were all up and down these shores . . .

“The population of native Hawaiians has diminished considerably since Western contact, usually dated from the arrival of the English seaman Captain Cook in 1778. From an estimated 300,000 that year, the population fell to 71,019 in 1853. This dramatic decrease was largely due to the introduction of various diseases (including cholera, chicken pox, influenza, measles, mumps, and syphilis), for which the immune systems and medical expertise of the natives were completely unprepared. Furthermore, Cook and those who came after him introduced firearms to the archipelago, making tribal conflicts much deadlier.” (From HERE)

If you are not reading this blog post at DisperserTracks.com, know that it has been copied, and likely is being used by someone with nefarious intention, like attracting you to a malware-infested website.  Could be they also torture small mammals.

About “likes”:   Of “Likes”, Subscriptions, and Stuff