Posted on 13August2016 by disperser

It all started with Monthy Python and the Holy Grail.

No, wait . . . the lie predates the movie. Every man-on-a-deserted-island cartoon I ever saw drew coconuts that looked like this:

Well, not exactly like that . . . they drew them whole, but still looking like this, with the familiar bowling-ball-like indentations. 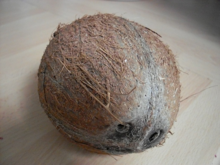 Those are, in fact, coconut seeds . . . although even that is confusing because they are still called coconuts.

I can’t credit the second of these next two photos/graphics because there is no copyright markings on it like there is on the first. I found then both on a forum. If the rightful owner comes forth and objects of their use here, I will pull them.

I mention all this because I’ve been looking for coconuts . . . wild coconuts, and I naively looked for the familiar store-bought version. You know, the one that is actually a seed.

Once I looked into it, I quickly realized my mistake.

“Wait just a second, Bob! Didn’t you see all sorts of trees with actual coconuts on them?”

Well, yeah, but I was just casually looking, and not paying a whole lot of attention.

“OK, I can almost buy that given your limited cranial capacity. But, why were you looking for coconuts?”

Well, I wanted to draw on them.

I wanted to grab a coconut and draw on it so that I could use it as a decor piece. Once I knew what I was looking for, I grabbed these two (one dried, one still immature — both had fallen from the same tree).

Just to show how naive I can sometimes be, I asked a local if it was OK to pick up coconuts. They looked at me kind of strange and I took that to mean “yes”.

By the way, on the second or third day here I snapped this photo at the Old Kona Airport park . . .

This is akin to the man on a deserted island cartoon . . . someone sitting under a palm tree. As an engineer, the first thing I thought when I saw this was that if Newton had sat under a palm tree instead of an apple tree we would still be trying to figure out this “gravity” thing.

Anyway, here are a couple of more views of “my” coconut.

I named it “Canvas”. Canvas is roughly 15″ long, and each of the three sides is about 6″ or usable surface area.

Since I only have Canvas, all my drawings attempts entailed me erasing and cleaning the coconut before doing a new one. This took a while, Bob.

I was not happy with my first attempt . . . a beach scene.

By the way, you can click on the photos for a larger version which will open up in a new tab or window.

Anyway, I was mostly un-thrilled with my efforts. I mean, I know I’m not an artist, but I thought I should have been able to do better. Thus, I set out to do a ship. I thought that would play well as a design on a coconut. However, I had to wait for a little bit since a gecko came to check things out.

It’s actually fairly easy drawing on coconuts with a pencil. I was going for a scrimshaw look, but I was also not too pleased with this since the design did not harmonize with Canvas.

After cleaning Canvas — graphite is difficult to clean from coconuts, I learned — I drew s slightly smaller version using my sepia pencils. Bet you didn’t know they made sepia No. 2 pencils.

I kind of rushed it because we had to go to the gym (yes, we finally found and joined a gym), but I thought it turned out pretty well. Plus, sepia drawings are easier to clean.

I needed a clean Canvas because my next attempt was more ambitious . . . a color drawing. I was not sure what to pick but inspiration came from the many hibiscus flowers around the premises.

I really should have used one of the smoother faces. That crescent-like feature creates nothing but problems.

I was actually pleased with the effort and decided to get really ambitious . . . a mask.

Again, I was rather pleased with it, but it consisted of simple patterns and shapes. Wanting to challenge myself, I decided to draw Disney’s Cinderella castle at night with fireworks going off. This took me almost ten minutes, so you know I put in some sweat and tears into it.

I don’t know . . . you can sort-of see the castle, but the fireworks are lost in the husk of the coconut.

Not sure what drove me to think “selfie”, but that’s what I decided to tackle next.

You see the problem, right? I drew the eyes too big. No way was I going to fit my whole face on what remained of Canvas. Once more discouraged, I decided to return to what worked: boats. Only, this time, I wanted a sailboat.

I labored in avoiding the big features on Canvas, but I think I used too much yellow. Still, much better than a fantasy castle as far as coconut decorations go.

But, what I really wanted was something Hawai’ian . . . This was my first attempt . . .

I was really happy with this. My drawing skills were improving by the minute . . . still, that could have been Texas. They have palm trees there. Or, maybe even Palm Springs. Sure, I drew lava in the foreground, but unless I tell you that — which I just did — you would never differentiate between it and Galveston Bay.

Nope, I needed something even more Hawai’ian than a row of palm trees. Only one thing I could think of . . .

Yes! I even managed to incorporate the bothersome crescent shape, making it look as if the guy is surfing down its face.

But, that too is a lie. I don’t surf. I don’t plan to ever surf. No, I needed something that was tied to me, to who I am, to what I do. There was only one possible solution.

I can’t believe I named them all.

27 Responses to Hawai’i – The Coconut Lie