We closed on our house on the 15th of June. By then, we were in California. Our drive to California added a tad over 1,700 miles to our remaining car, the 2010 Toyota Highlander. This is the path we took (click to open a zoomable version in a new tab or window):

Let me speak a moment about our choice of selling the Tahoe and keeping the Highlander. It was a difficult choice but we went with the logical choice. The Tahoe was older, had 40,000 more miles, is larger, uses more gas, has had more issues than the Highlander . . . so, why was it difficult? 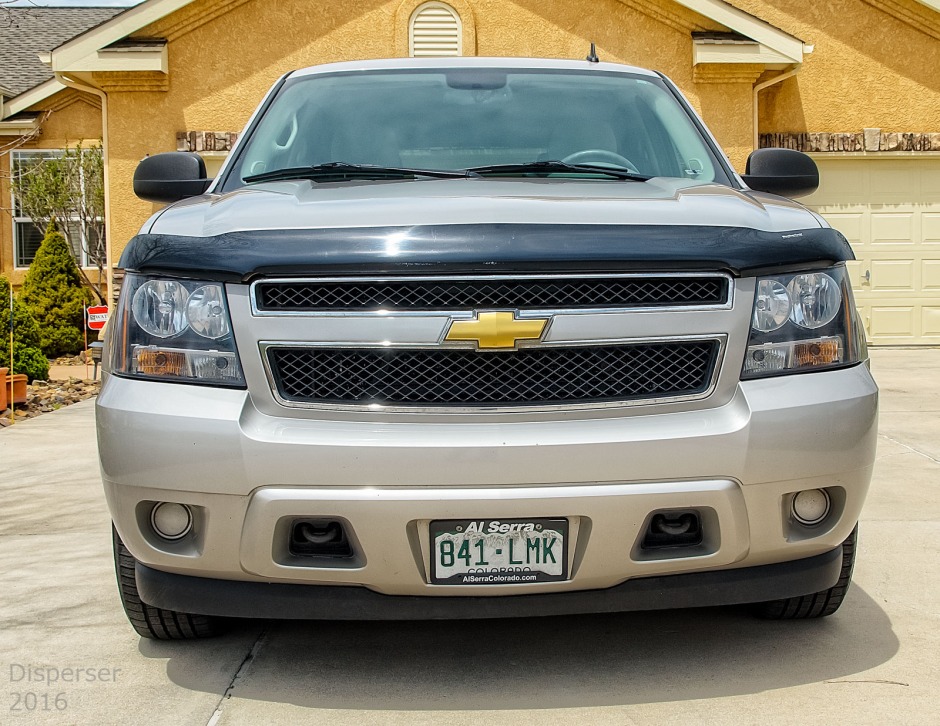 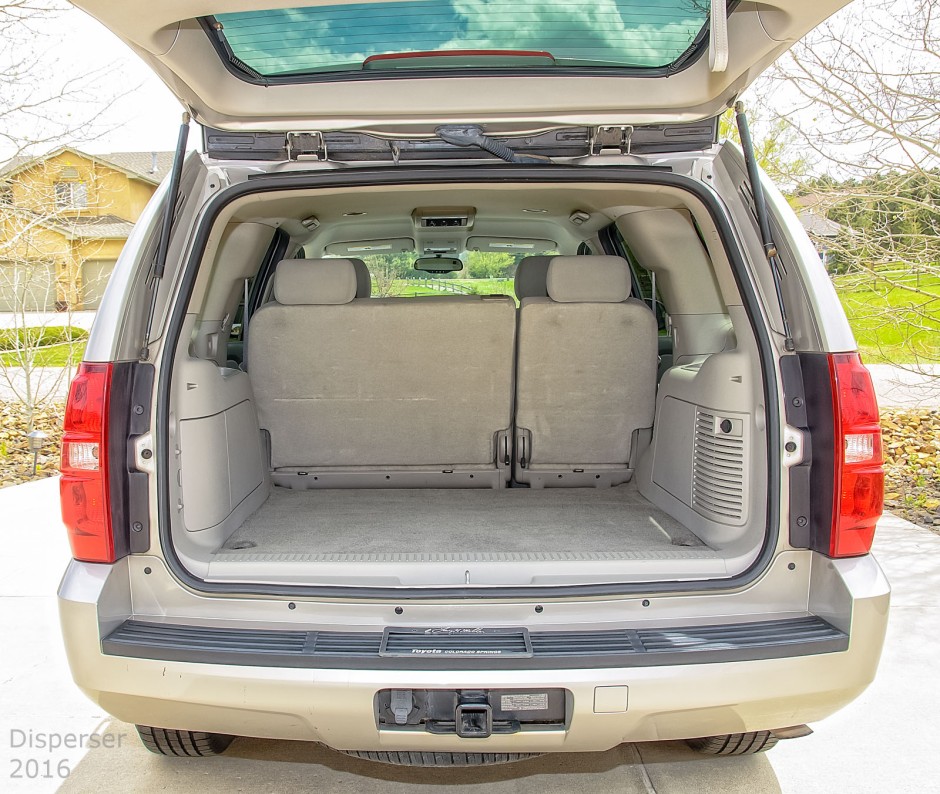 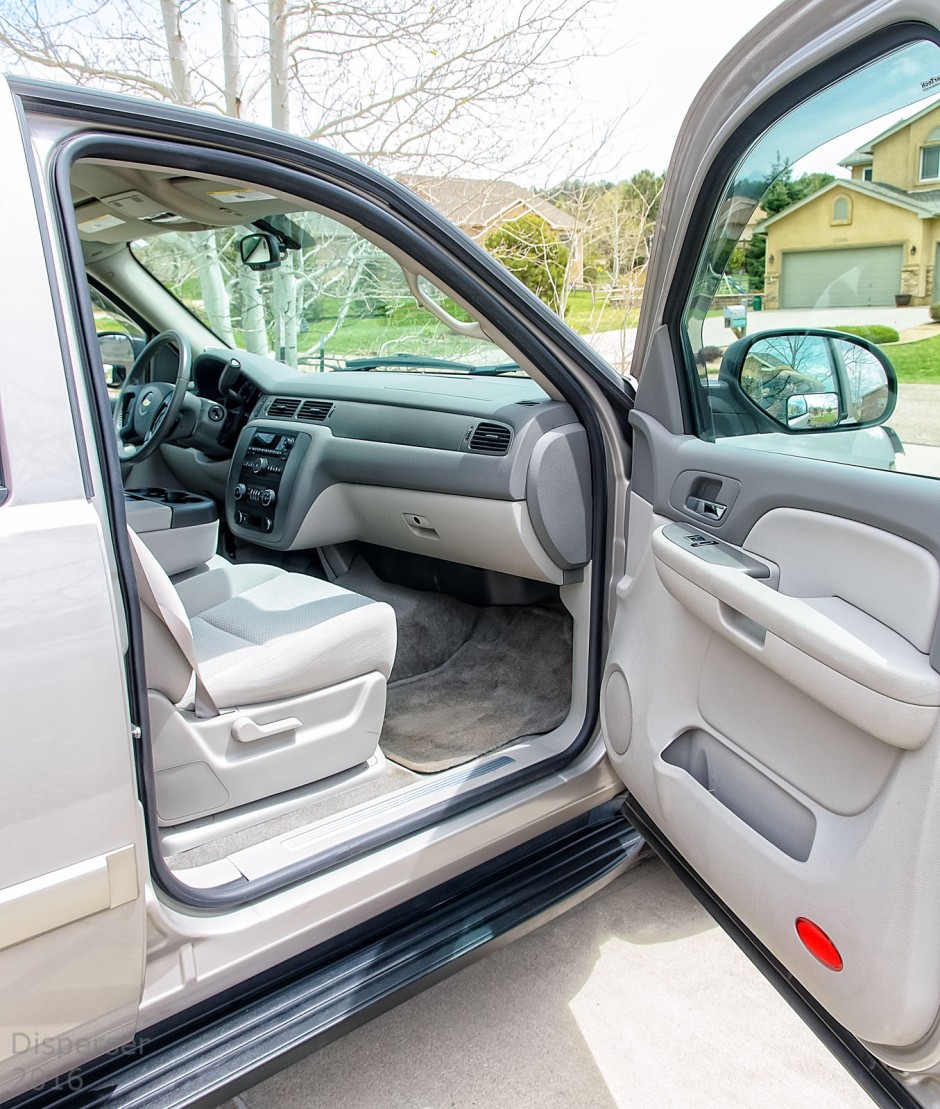 Anyway, driving. After two days, we stopped at Hoover Dam. Before that, we cut through a little bit of Nevada. This is what Nevada looks like:

By the way, the travel photos — but not the Tahoe’s — are in SmugMug HERE.

I know many readers suffer from SmugMug Reluctance Syndrome, so let me tell you what I’m gonna do; if you have the bandwidth, click HERE to open the 12MB full-size version of the above panorama in a new tab or window. Once opened, click on it to zoom in and out of points of interest.

A feature in the above panorama that captured my interest was the shot from the movie The Mummy (see equivalent shot HERE). Except, you know, rendered in rock.

Because I know a few readers will still not see it, here’s a little help.

Now, look at the photo again:

If you still can’t see it, you should check your imagination circuitry.

Again, click for a slightly larger version or go to SmugMug for the full version . . . or, if you have the bandwidth, click HERE to open the 20MB full-size version of the above panorama in a new tab or window. Once opened, click on it to zoom in and out of points of interest. Cudos if you can find the helicopter that’s flying around.

By the way, I do like having my big rig back . . . it lets me quickly write these posts as I listen to some of my favorite music. Like, for instance, this:

Yes, I know; the words make little (no) sense, but the visuals (brain and chest splatter, in particular) really go with the music and I like the driving drums combined with the singing style and electronic music. Awesome.

Again, for them not clicking on anything, a few photos of the features in that stark landscape. 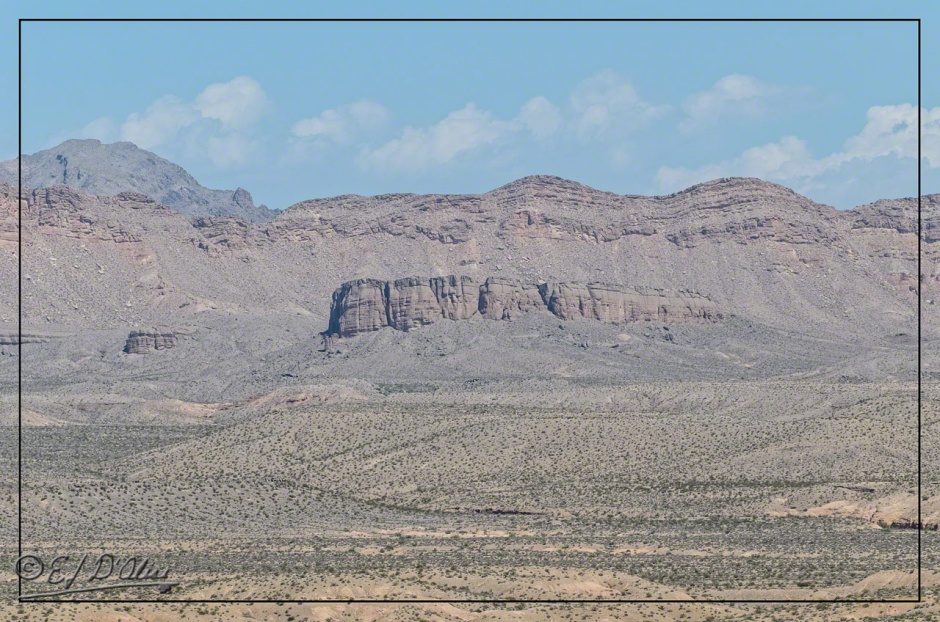 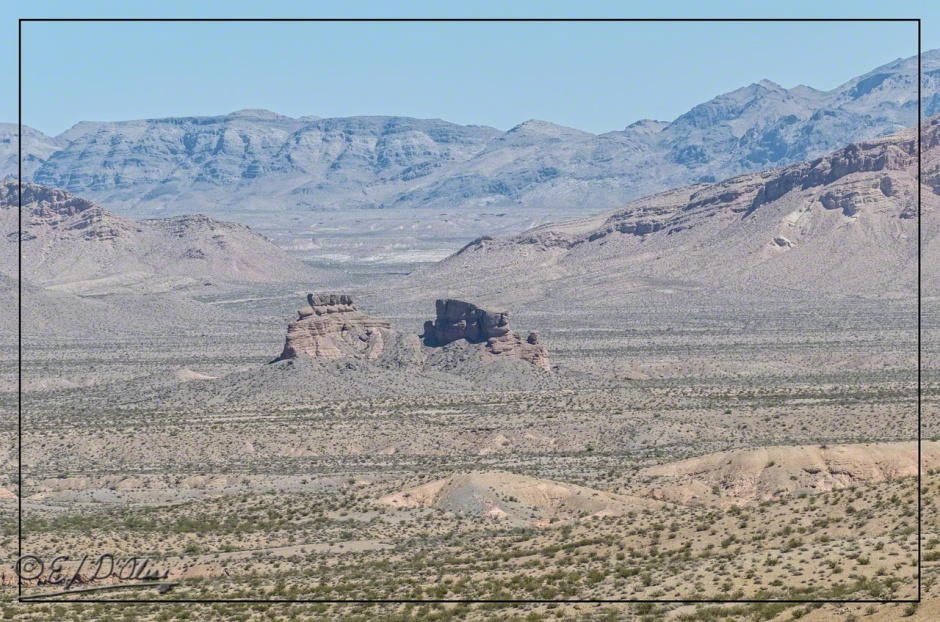 Our time in Nevada was brief. As brief as our visit to Hoover Dam.

Now, Hoover Dam is truly an engineering marvel. Impressive use of cement. But, more impressive, was the Lake Mead’s bathtub ring.

For them who be not know about it, the lake’s level has been dropping for years, the original level marked by the bleached rocks surrounding the lake.

That’s a lot of water that’s no longer there, sucked up by the water-greedy Western states. You can read about the steps taken to keep water flowing to where it was never intended to go. More depressing reading HERE.

This next photo is the first one I took after I got out of the car into stifling and oppressive heat.

I’m not as smart as everyone thinks I am and certainly not as smart as I think I am, but I surmised the above was a spillway constructed when dreams of unlimited water prompted Western expansion of places that are now sucking the lake dry. I just checked, and I was right (HERE).

Since most won’t click on the link here’s the image few will see again (note, I do not own this image and will remove it if asked to do so):

For them who might not know what a spillway does and the subset of those who can’t work it out from the image, it keeps the water from spilling over the top of the dam by diverting it around the dam once water levels get too high.

Understand, it’s not just drinking and irrigation water that are put at risk by the current drought. Hoover Dam produces much of the electricity for the surrounding areas. The drop in water levels forced upgrades to turbines and control valves (HERE) and systems associated with power production at the dam. By the way, same problems at Glen Canyon Dam and Lake Powel.

Hoover Dam itself is an impressive sight and my photos do not do it justice. Still, if I don’t show the photos, then there’s not much point to this post. 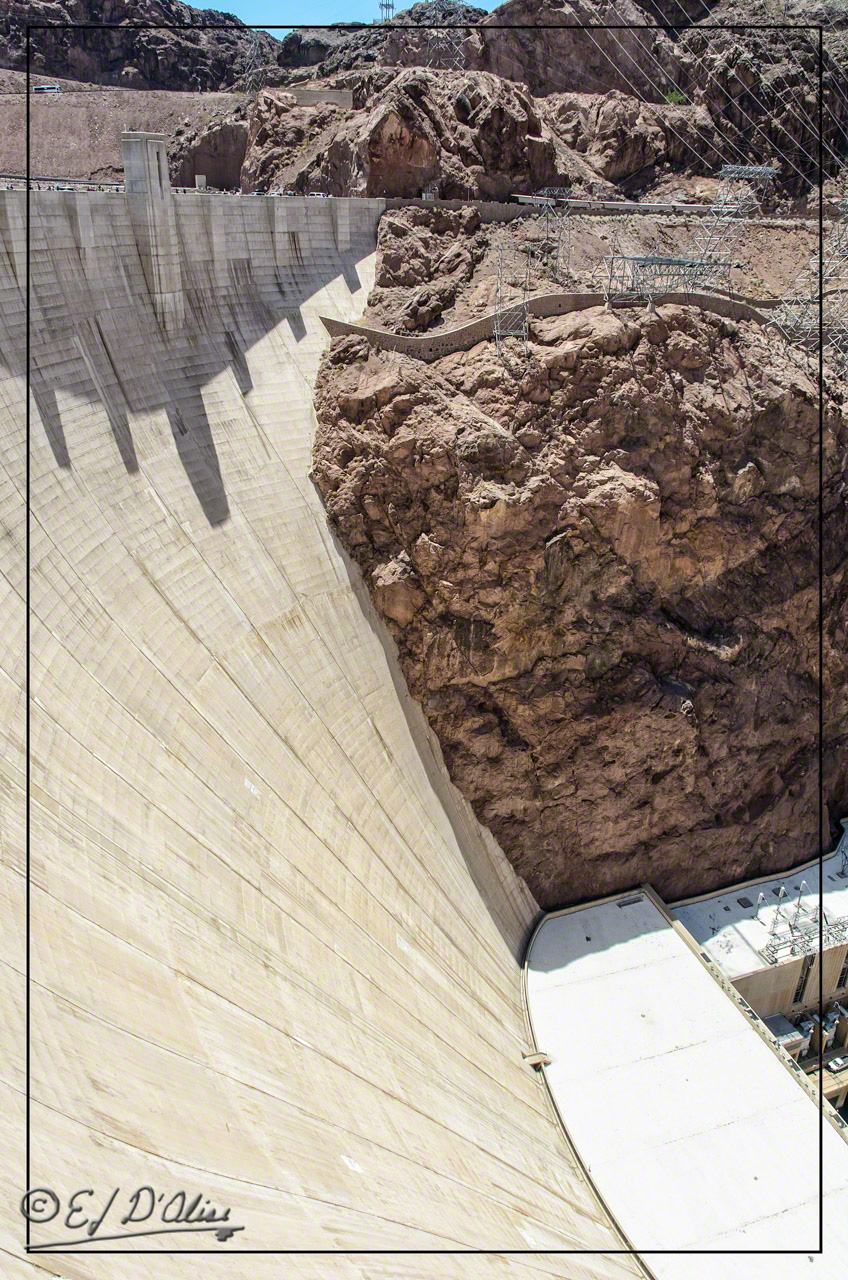 Take note of the size of the people walking along the top of it. Those are not miniatures; they are regular-size people. Honest to goodness humans, some as tall as they are wide.

Here are a couple of panoramas shot with my ultrawide lens (hence the associated distortion). 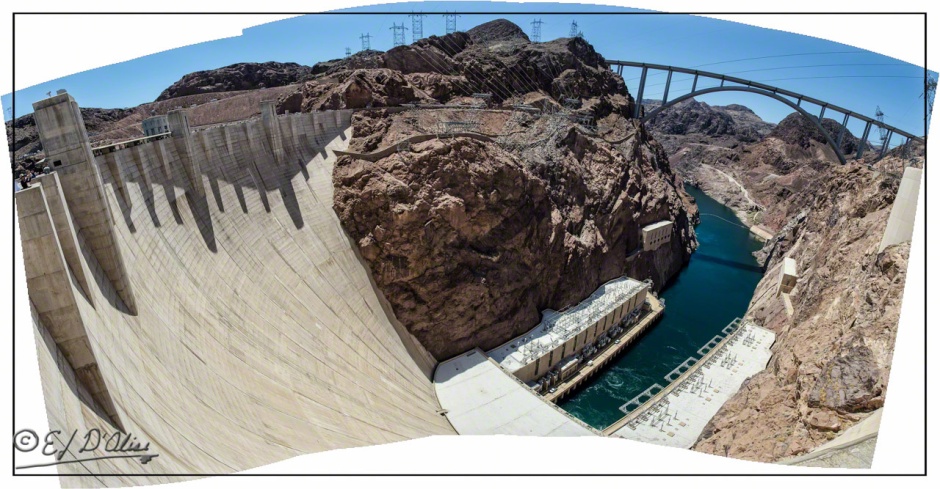 In the distance, one can see the Pedestrian Bridge offering a view of the dam from an elevated position. I am sure the photos from that bridge would be amazing . . . and, if I could have found parking, and if it weren’t so frelling hot, and if we weren’t on a timetable, and if, and if, I would have had those photos. 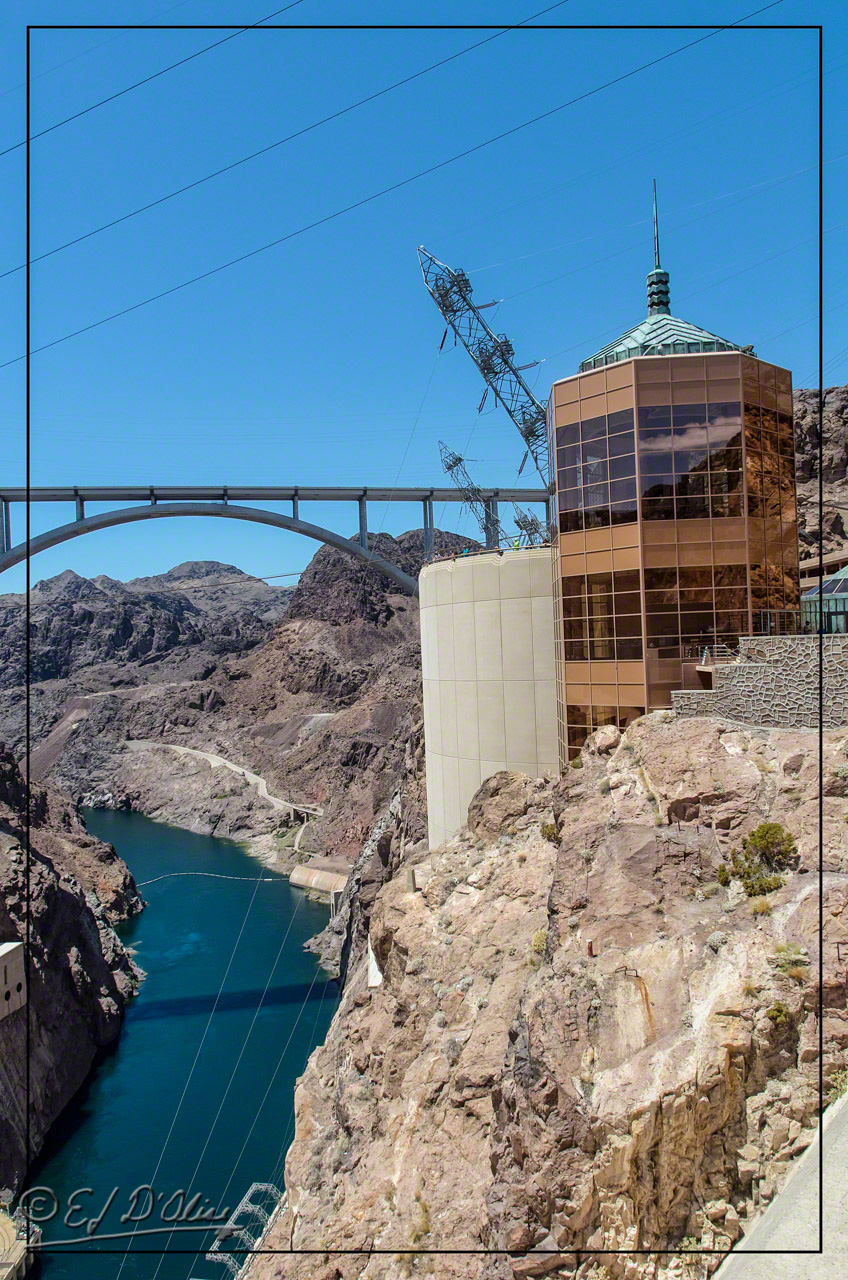 That’s the Visitor Center. Another place I would have entered (it has A/C) were it not for the fact they were charging $10 per adult. That was just to enter the building. The tours were $30 per adult.

Understand, I’m not a cheapskate and I would have gladly paid for access to things . . . but the thought of being stuck with a bunch of strangers the likes of these . . . 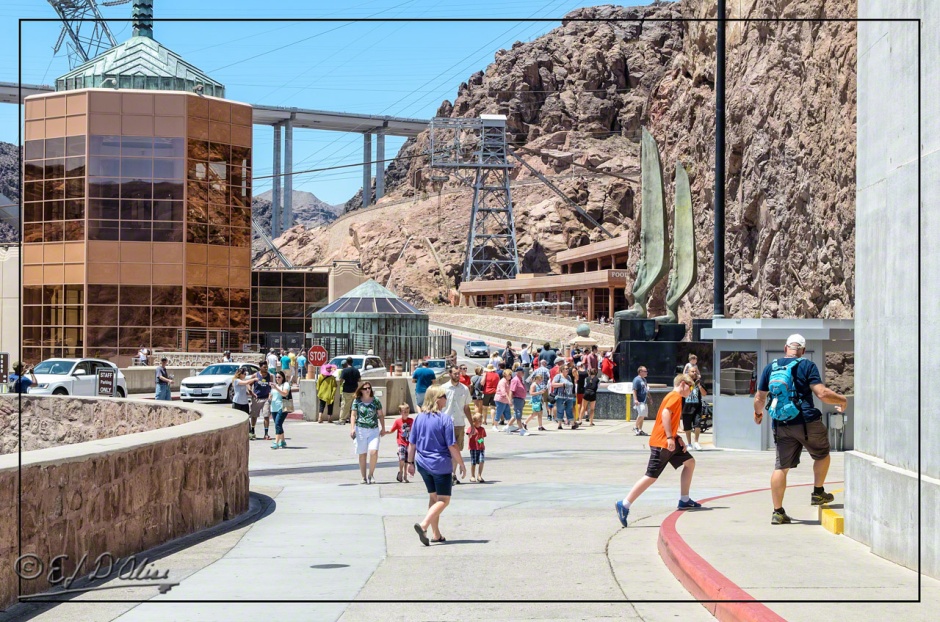 . . . one of which would have surely made a string of dam/damn jokes (that would be me), well, let’s just say I was not motivated. Maybe next time.

These are interesting statues adorning the dedication plaque . . . 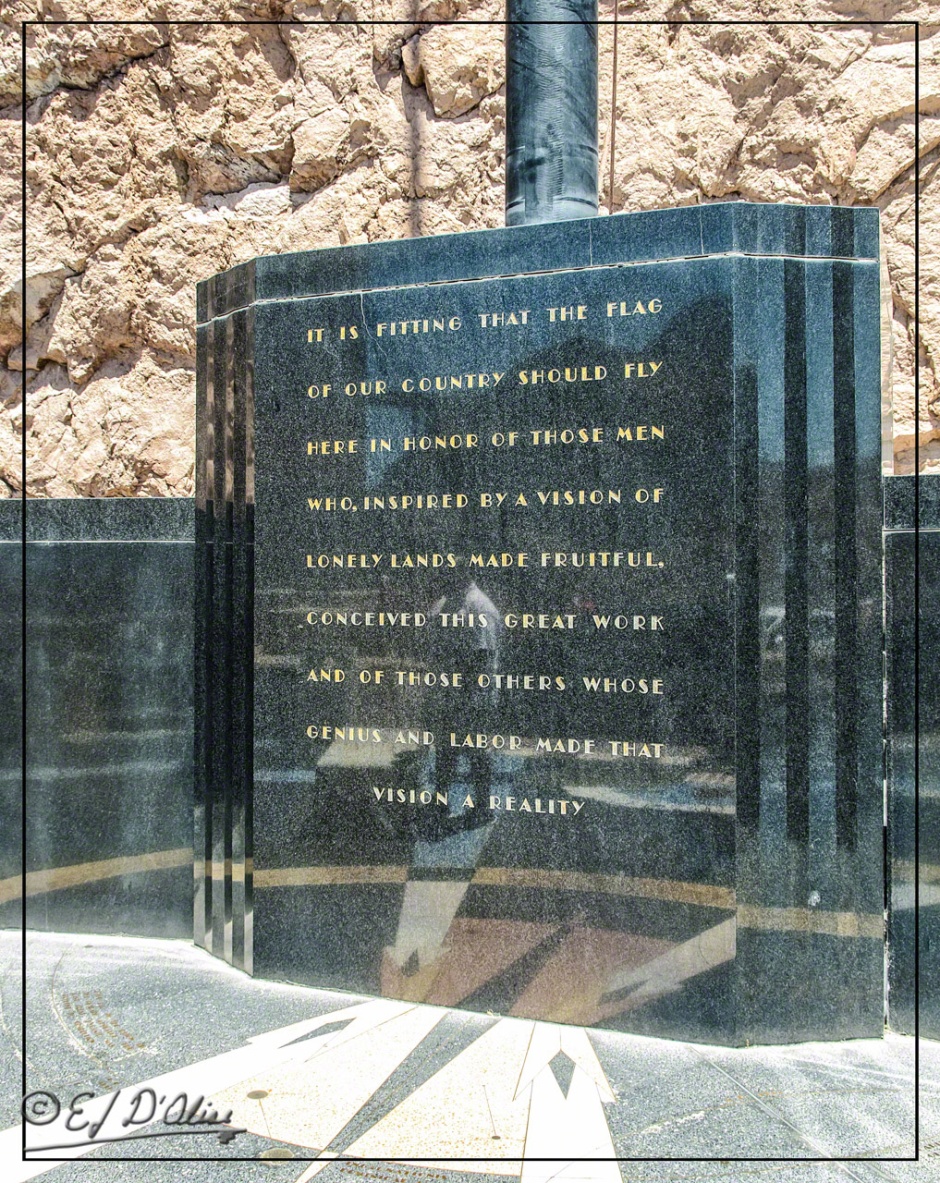 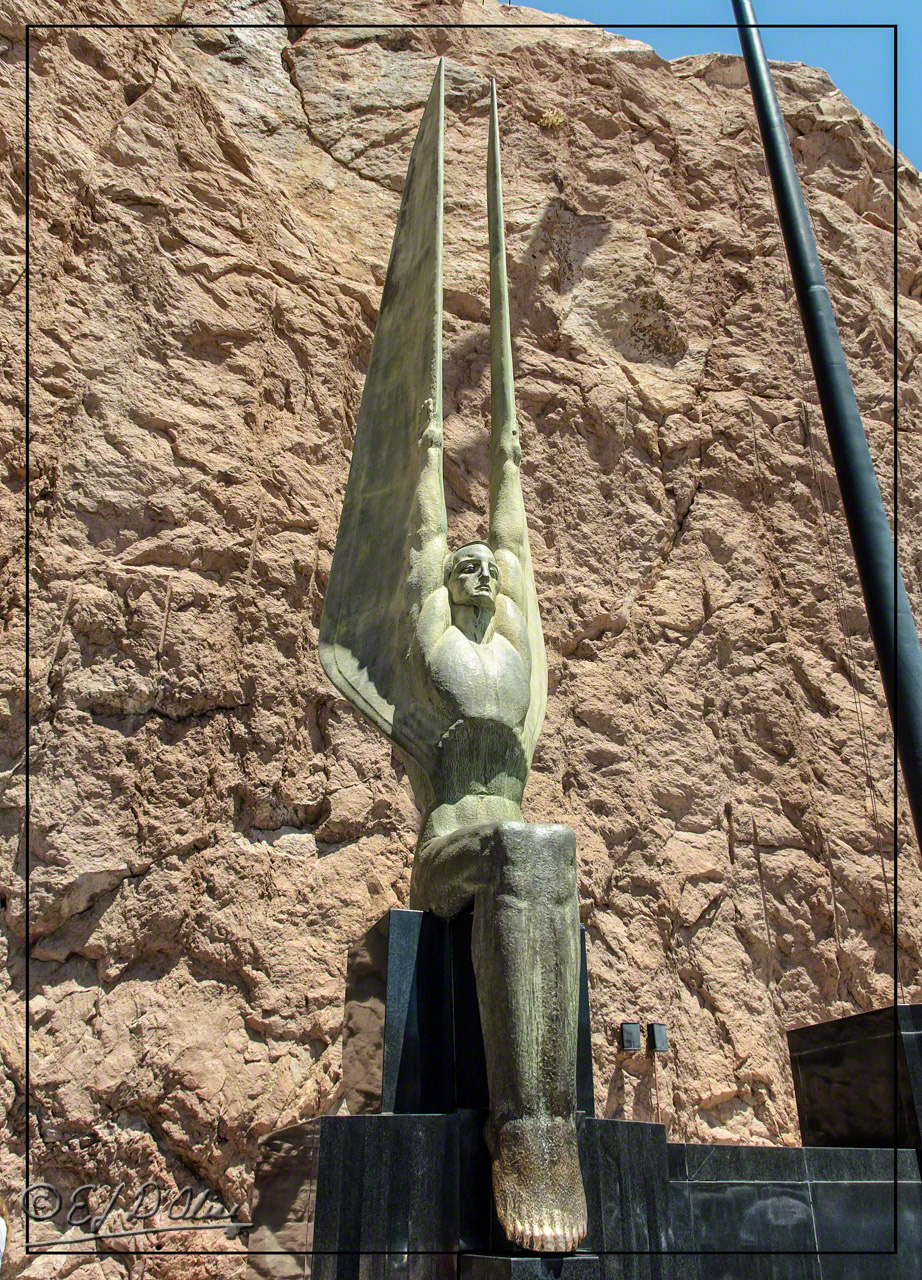 . . . their feet shiny from being rubbed by people thinking doing so will bring them good luck.

Since most rivers also mark the boundaries between states, the dam straddles the border between Nevada and Arizona. 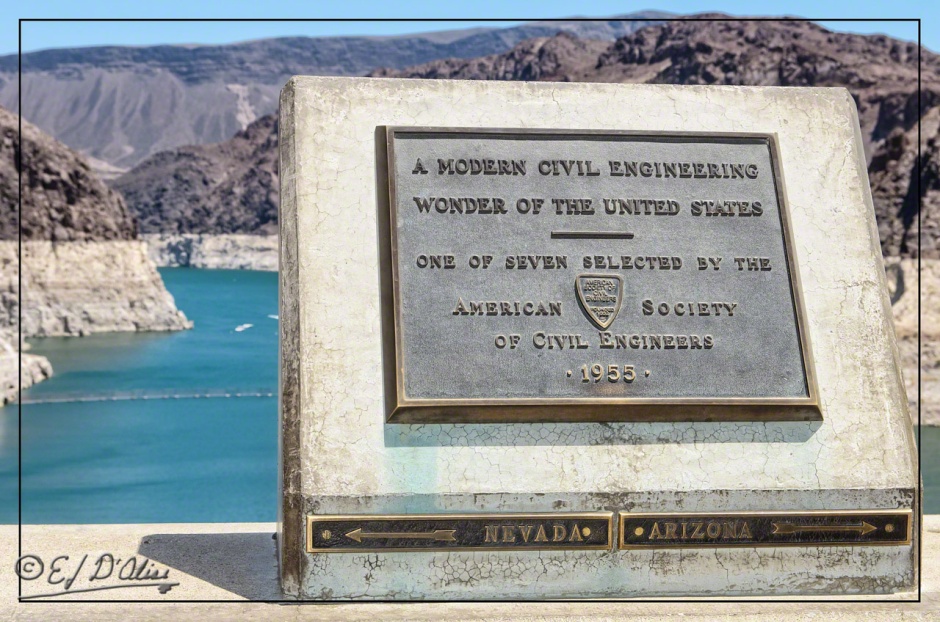 All in all, we had a decent visit and if we chance that way again I plan on spending more time and maybe even suffering Dam Jokes (by me) on an actual tour of the place.

P.S. After a long absence, this post marks the return of the doodles. There are only eight more before I finish cycling through all 400+ of them. I don’t know if I will restart the series or make the effort to create new art to anchor my blogging efforts. Perhaps I should ask my readers . . .