I came close to not doing anything for Cover Makeover #9 because the sample cover is so simple.

I take up these challenges to play with features of Photoshop I am familiar with (so I don’t forget them) and to learn new stuff as I come up with a cover.

And then I realized I can make up whatever I want and also comment on a concept presented in the book that, while familiar, seems largely tolerated if not outright embraced; doublespeak. I used to think “doublespeak” originated with this book, but that is not the case. The book actually refers to doublethink, but it’s largely the same thing; the manipulation of emotion by the choice of words.

Regardless, the practice has become so prevalent that we don’t even pay attention to it: ‘assault weapon’ instead of ‘gun’, ‘baby parts’ instead of ‘fetal tissue’, ‘police action’ instead of ‘war’, and so on.

I am, perhaps, more attuned to listening for it than most people. Maybe because I am old, or maybe because I write. Whatever the reason, I analyze the choice of words to determine what the speaker or writer wants to convey and, more important, how they want to manipulate my emotional response.

For instance, if you listen to certain channels you might hear how terrorist groups are “killing Christians” . . . why not say “killing people”? After all, that what they are doing; they certainly are not killing just Christians. But if you want to fire up a population tired of sending soldiers to die in foreign lands, you want to bring it home to them that “they” are killing “our kind”.

Anyway, it’s neither here or there. I’m disappointed with how we’ve shaped our world and, more important, I’ve lost any hope for humanity in general; in many ways 1984 is an accepted reality that bothers far too few to ever go back.

My main concern right now is this cover. So, what do I want on my book cover remake of 1984?

Well, I need a representation of Big Brother and the idea of an oppressive society where people have lost their individuality and their freedom of choice. I want eyes, a domed city, and indistinct powerless people.

I begin with this shot for the eyes: 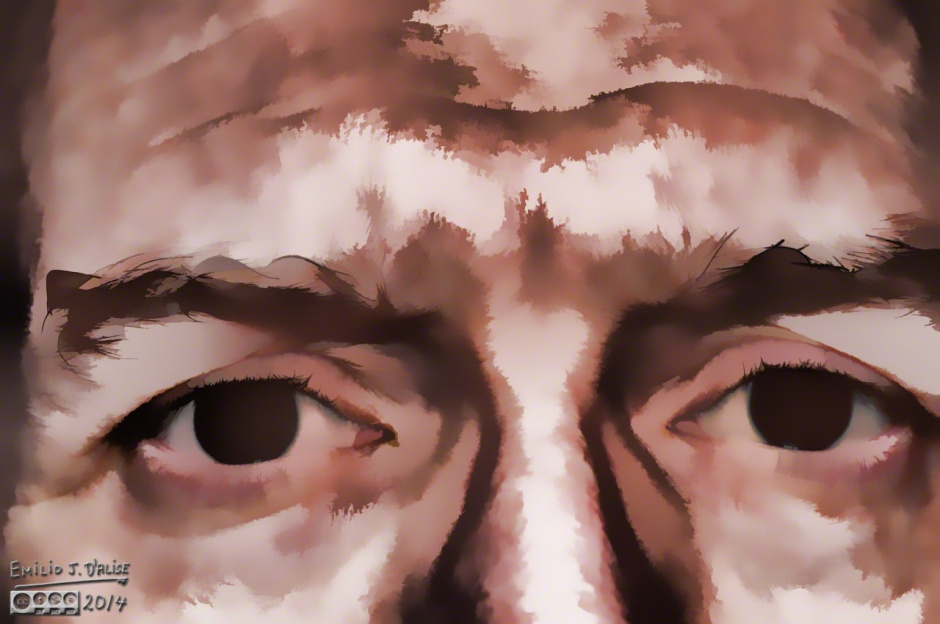 I needed something conveying a soulless individual . . . so, yes, those are my eyes. I had two other versions of this shot from one of my Untitled Posts series, #00038, but I liked this one better than this one:

Next, I needed people . . . I don’t have many photos of people and so I am surprised when I find things I can use. This next photo came from my Mount Rushmore post:

The city under a dome comes from THIS post of my 2008 visit to Chicago, and specifically, this photo of The Bean:

With all the individual components in place, I set about creating this:

Some might say it’s too busy. As usual, I like my effort . . . it’s probably a cognitive bias on my part; having spent time creating this, I can’t help but like it.

I hope this exercise in a bit of escapism has entertained you. If not, don’t tell anyone about this post. Unless there is someone you don’t like, in which case point them here so I can add them to the long list of people who hate my guts.