It may not seem like it, but I still maintain and occasionally contribute to this blog. I probably shouldn’t as things seem to pile up faster than I can unpile them, but this is my relaxation. Writing is too, but that requires more time. Plus, I have some Beta reading to do for someone who is returning the favor.

In case anyone could not figure it out, we were traveling. Specifically, we traveled to Wyoming scouting possible relocation places. Wyoming is attractive for one big reason . . . the whole state of Wyoming has roughly 80,000 fewer people than the county I live in (El Paso County, Colorado).

That, in combination with other things that occupy my time, has forced me to put the blog if not on the back burner, at least in simmer mode. 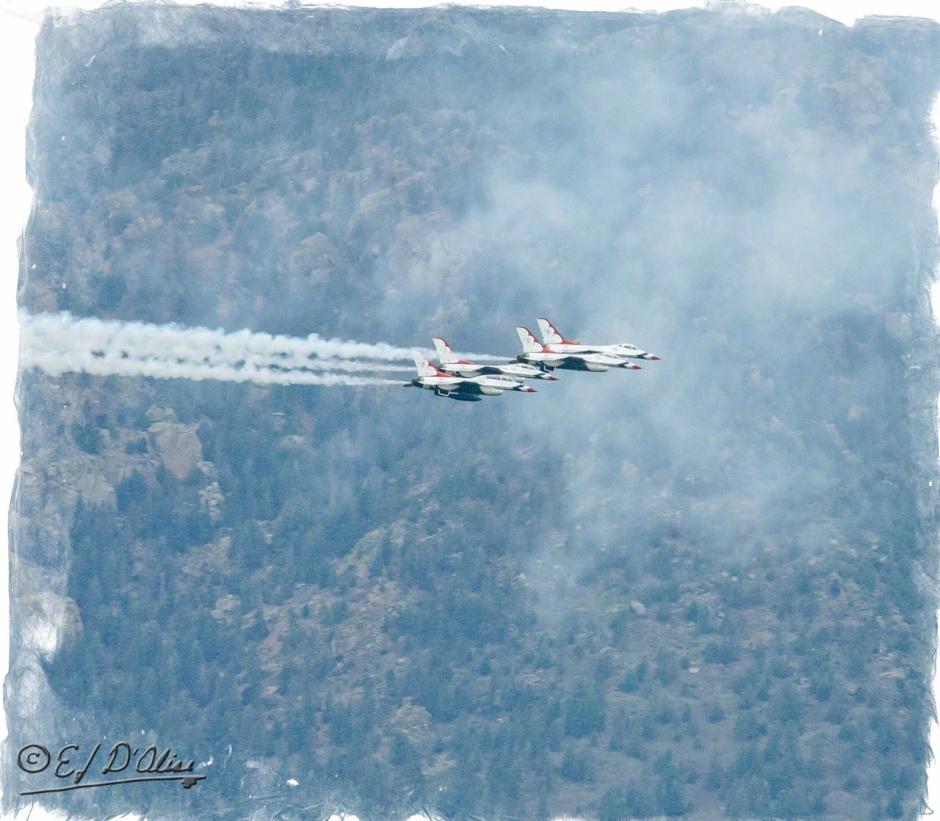 So, for instance, I’ve yet to process the photos from the Air Force Academy graduation Thunderbirds show.

To tell you the truth, I’m also not very happy with most of the photos. The weather turned cloudy during the show, forcing me to shoot at a high ISO. On top of it, the smoke they liberally sprayed hither and fro interfered with the AF. Plus, in case people don’t know, those suckers move pretty fast. 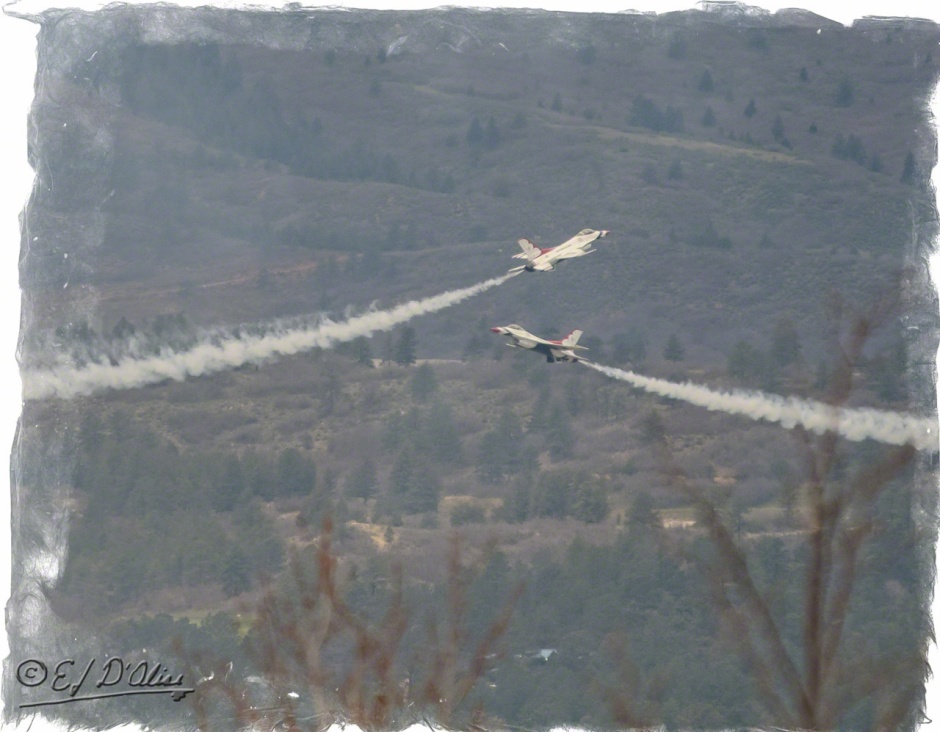 Yes, these are not bad . . . but the majority are more like that last one; almost good, but not quite. 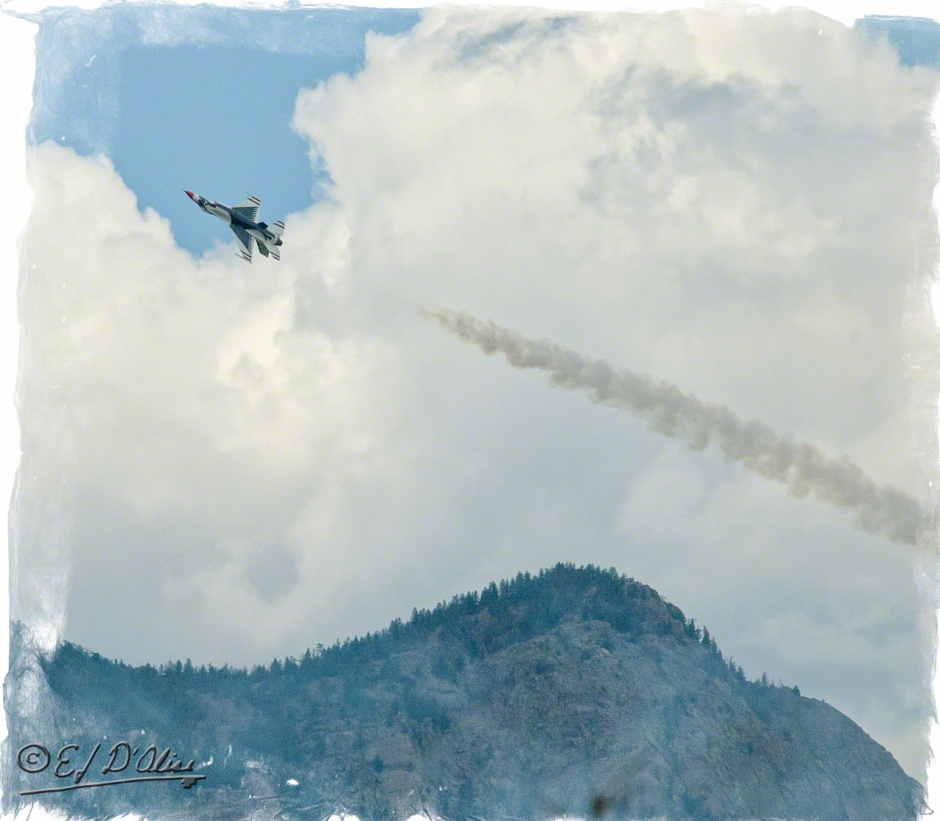 I will eventually process them all, but the above preview will have to suffice for now.

A couple of posts ago I threw up some photos I snapped using my Samsung Note II phone camera. I thought I should show what a real camera can do . . . 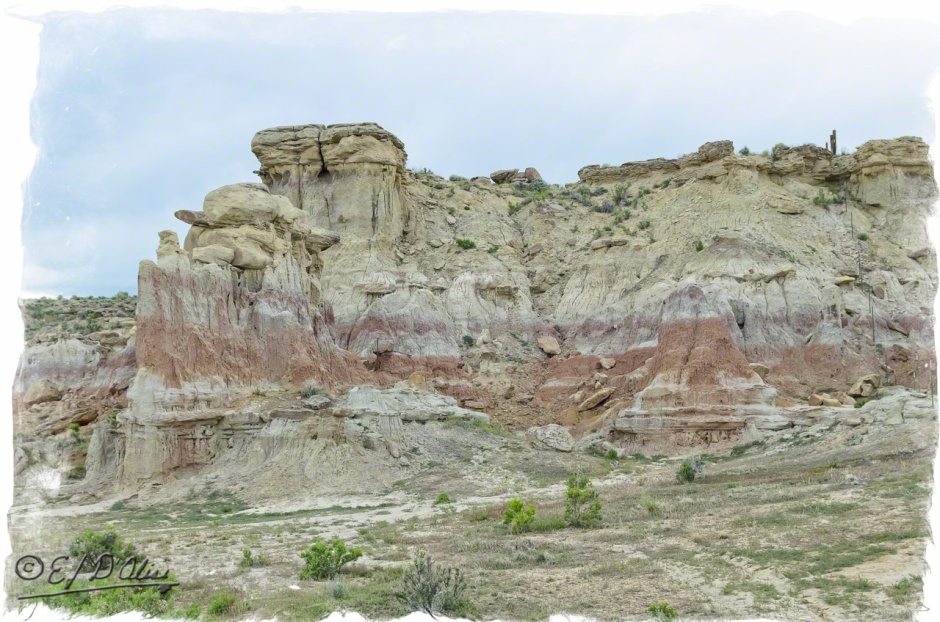 Those are taken on my way to Cody from Buffalo (WY). It’s an area that resembles South Dakota’s Badlands. Too bad it was overcast, but you can still see the colors and shapes.

This next shot is an example of some of the terrain and views . . .

Photos never do these things justice, but I’ll tell you I was shooting at least 75º from the horizontal; these things towered over the road.

Some might remember the phone photo of buffalo munching on the field of dandelions. Here’s a better version of it.

These next shots are of a different buffalo, and I’ll use it to illustrate a composition point.

Does it seem odd? Here’s a hint . . . you can shoot a close-up of the face and it will look OK. But cut the animal in two, and it will seem odd.

We did see a fair amount of animals, but less than we had hoped. We did see distant elk, but only a few up-close. 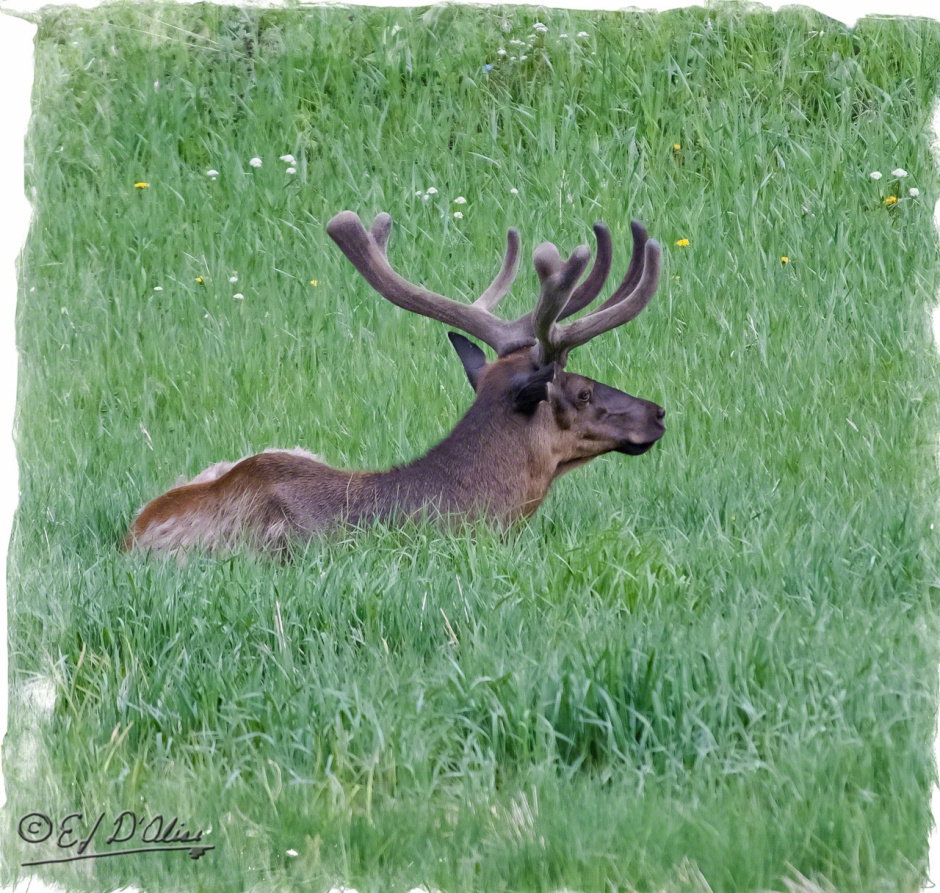 We did not see any black bears, but we did see a grizzly with two cubs (very late in the evening – I had to shoot with a very high ISO, so the photos are very noisy).

Yes, she is walking on the trunk of a fallen tree; the cubs followed her (more pictures when I write the trip up).

No black bears and no wolves,  but buffalos were all over the place. 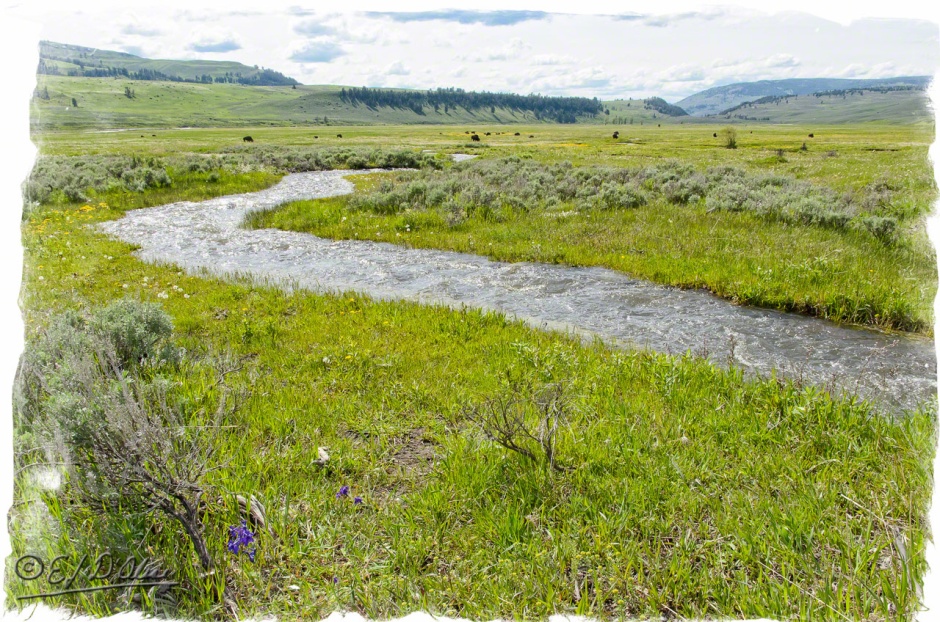 The first shot is one of eight used to make the composite photo that follows it. All of them were taken from the Artist Point overlook at the Canyon area.

Now, if you click on any of the above photos, including the last two, a larger version of the corresponding photo opens in a new tab or window (longest dimension limited to 1280 pixels).

BUT . . . for them with a fast Internet hook-up, the last two photos are offered up full-size through the following links.

Click HERE for the full-size version of the waterfall alone (~7MB / 3264 × 4928 pixels). Once it opens, click anywhere to zoom in. I suggest zooming on the overlook above the spillway; you can see people there.

Click HERE for the full-size version of the 8-shots composite (~20MB / 6171 × 14461 pixels; you best have a fast connection). I suggest zooming in all over the place once it’s loaded; I mean, if you are going to make the effort, you might as well explore the shot.

I also took in the occasional smaller waterfall . . . 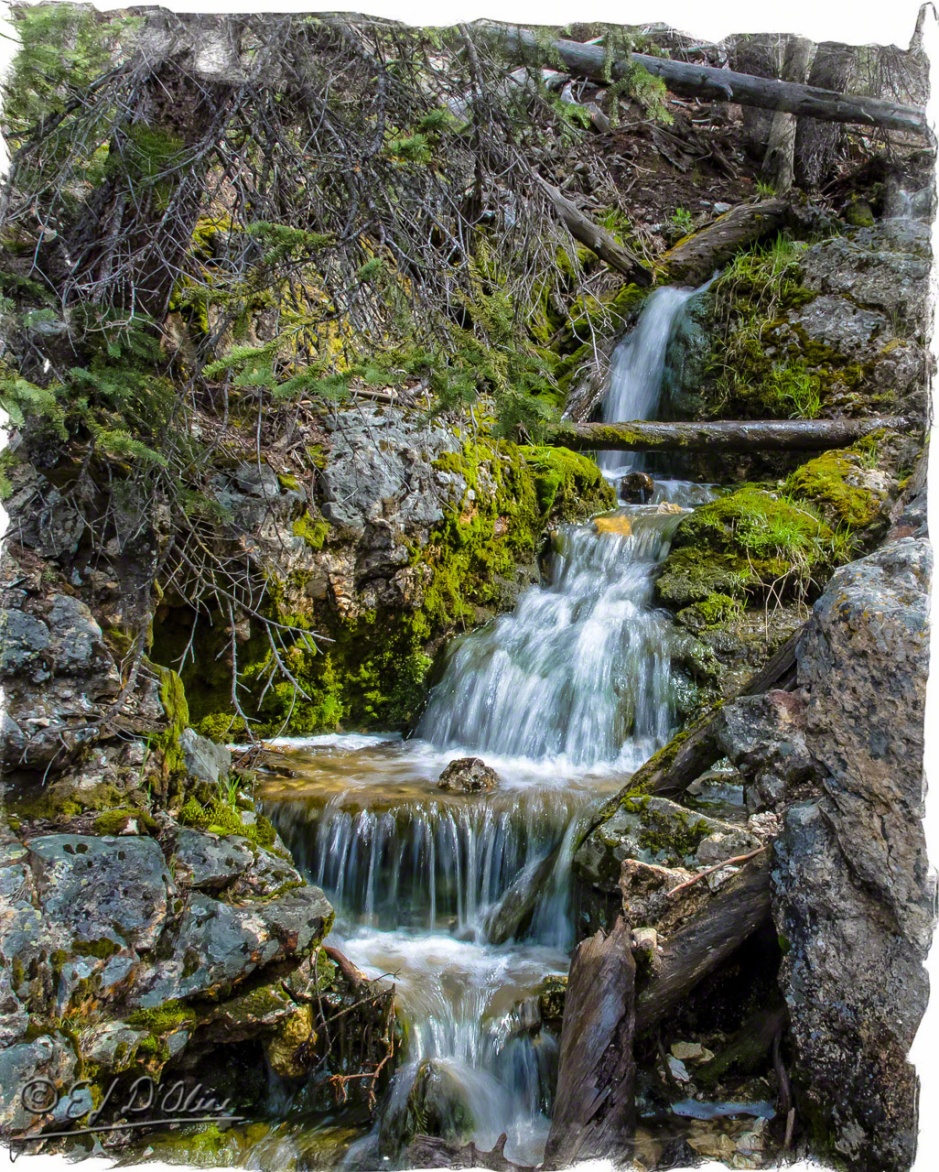 I did not have my tripod with me, so I used the top of a handrail to steady the camera for the slow-water shot.

Finally, on the way out of the park I stopped at the lake’s edge . . . there were lots of skipping rocks just laying about. It took me about four tries to get the following shot (pick up rock, skip it on the surface so that it goes a while, swing up the five pounds of camera and lens, get the focus, and catch the stone before it dives beneath the water).