Posted on 18September2014 by disperser

On a normal day, you don’t see them unless you get up early and catch the morning sun reflecting off them as it crests the surrounding hills . . . the angle has to be shallow, you see, otherwise they blend.

But on this morning there was a fog. A fog that deposited tiny water droplets on everything it touched; it touched ragnatele. 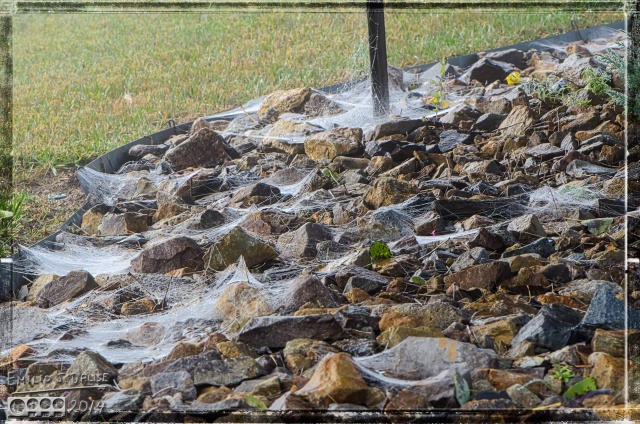 Every morning I am surprised at how many there are . . . the above is just a small portion of the rock landscape on our lot, but it is representative of rest of the rocks. 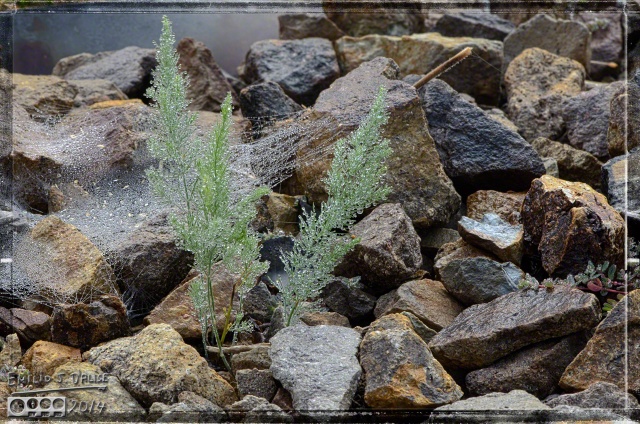 Actually, that last one is something I’ve not pulled from the ground. It reminds me a bit of miniature trees, and that is enough to have me spare its life . . . it will dies soon enough in the bitter cold of freezing nights.

This is what one of the spiders built . . . note the ominous entrance; what manner of beast resides within? Oh, yeah . . . a spider.

I tried to get one to surface, but as it was cold and damp, no amount of faux-bug-caught-in-a-web vibrations worked to get the monster from its lair.

What is of interest to me is the amount of work that goes into these webs . . .

Of course, in this case its web spinner might just have had a leak, and there was no intention to build anything, otherwise that is one sorry excuse for a spiderweb.

Sometimes I look at one particular webwork . . .

Meh! . . . I’ve played around with all these files to see how a B&W treatment might enhance the web itself.

What I found is that as long as the web is not too intricate, it can be made to look good in B&W. If, however, one tries to capture all of the web, it becomes too much and ceases to work. 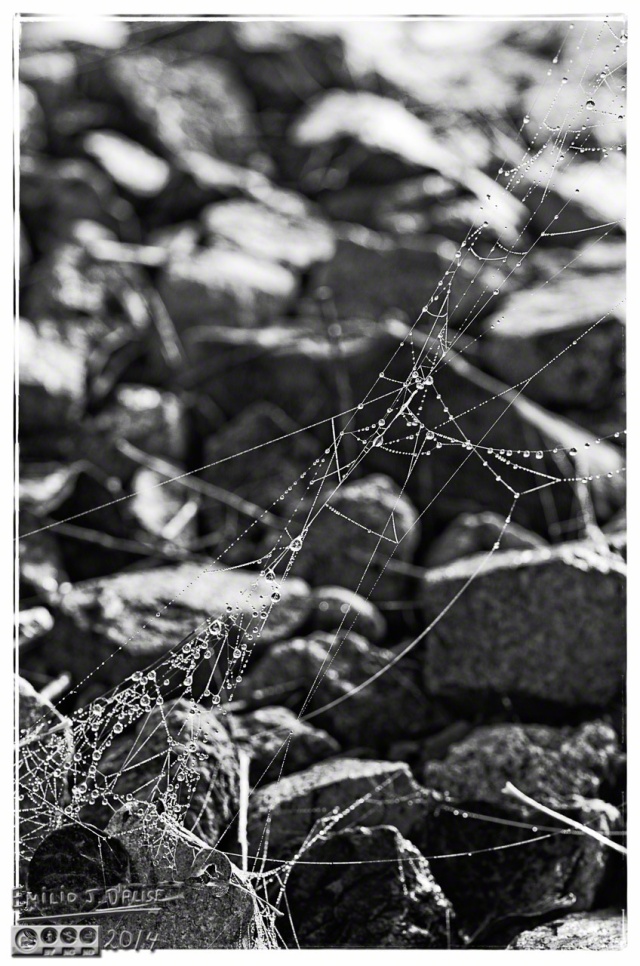 I really tried to turn this next shot into a B&W masterpiece . . . all to no avail. I left it as is.

You can click on the photos to get a larger view, or you can go look at the originals in the associated SmugMug gallery HERE.

This next shot shows a particularly ambitious effort (on the part of the spider, not mine) not just on the surface of the rocks, but extending toward the heavens.

Like I said, when it gets too complicated, conversion to B&W suffers a bit . . .

But, in this case I could play upon the reflection by adding a bit of ‘glow’ to the conversion, and darkening the background. 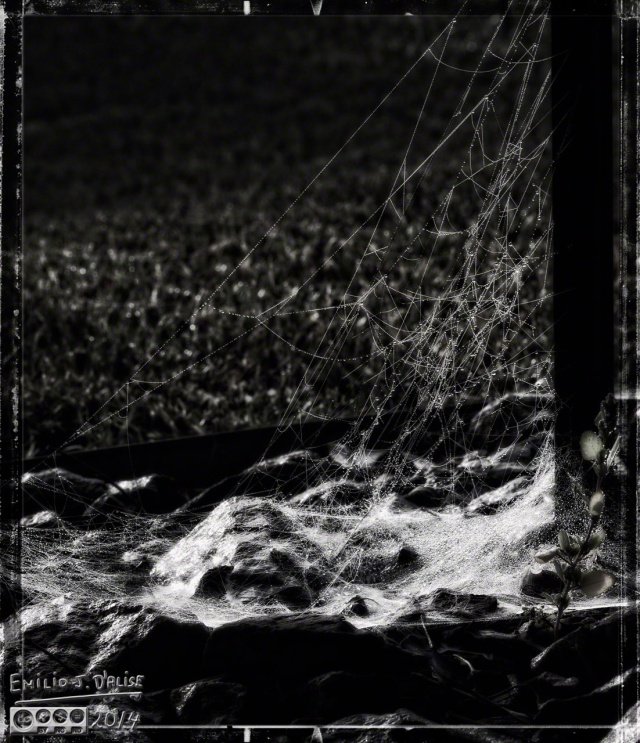 I saved this preset, but it did not work on other shots.

Here are two treatments of the last photo I snapped that morning.

But, while I am at it, let me show you a ‘Paint’ treatment on one of the shots not good enough to use ‘as is’.

I thought that was it with the cobwebs until we had our first snow.

I noticed a few cobwebs on the small evergreens flanking the walkway to the front door. I would not have noticed them were it not for the flakes resting on them.

A few days later I grabbed the mister (that something that produces mist, not a person referred to as ‘mister’), the tripod, the camera, and my macro lens.

Again, I played around with the B&W conversions I had used on previous occasions. 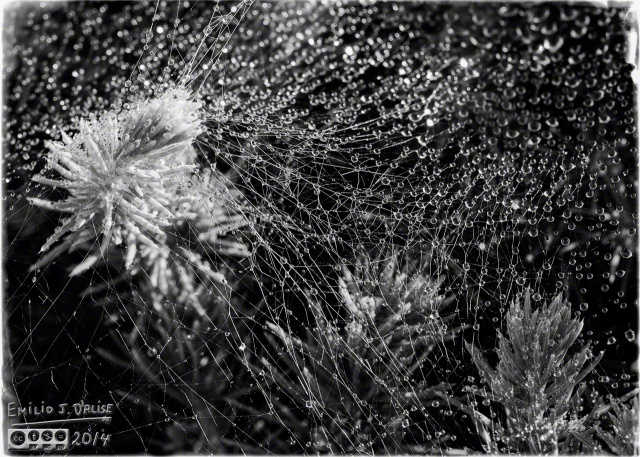 Now, both of the above look good at full resolution, but as much as I tried, I could not ‘bring out’ the drops and make them ‘pop’. By that I mean ‘have them stand out’, not ‘explode’.

For example, the shot above . . . here’s one treatment I tried.

It’s not bad, but not what I envisioned.

It gets especially more difficult when the picture is full of details . . .

So, I next tried cranking up the original before the conversion. This seemed to work a little better.

I was getting desperate! My whole reputation as a mediocre – and sometimes lucky – photographer at stake, I started to throw the kitchen sink at the photos (it was attached pretty good, and I had to employ my considerable strength to dislodge it). 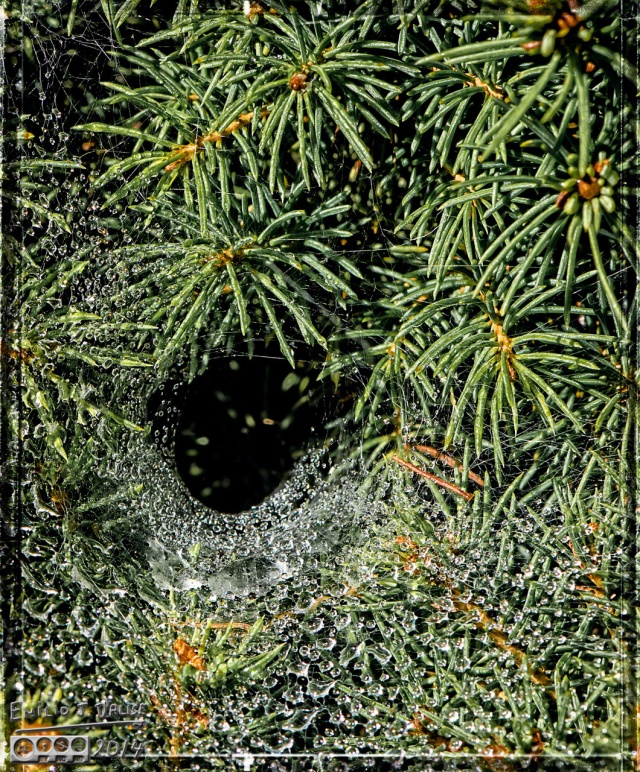 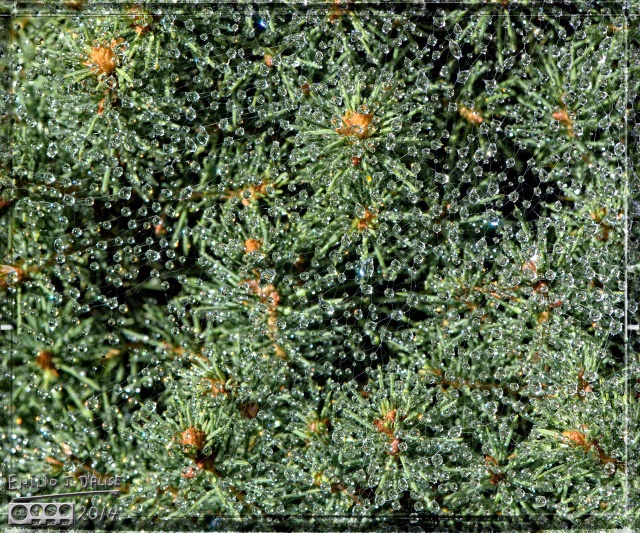 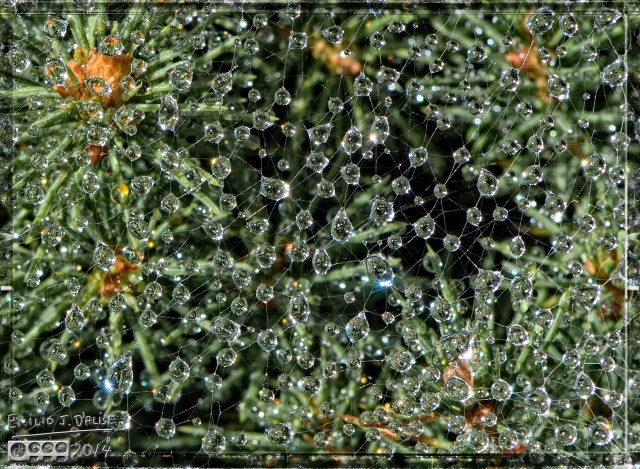 HOLY CRAP ON A CRACKER! . . . the answer was a 1:1 zoom and crop; it was sitting there right under my nose the whole time!

Had I  a smaller nose I would have seen it earlier. But no matter; once I knew the secret, I went to town, and when I came back I prepped the following. I was going to reprocess the earlier ones, but it was late, and I had feet to go before I slept.

So, here’s what I’m going to do for you, gentle reader and persons of obvious discerning tastes and fine upbringing (you are, after all, reading my blog); I am going to post my four favorite all at once, and then call it an evening (the post is scheduled to go up in the morning). 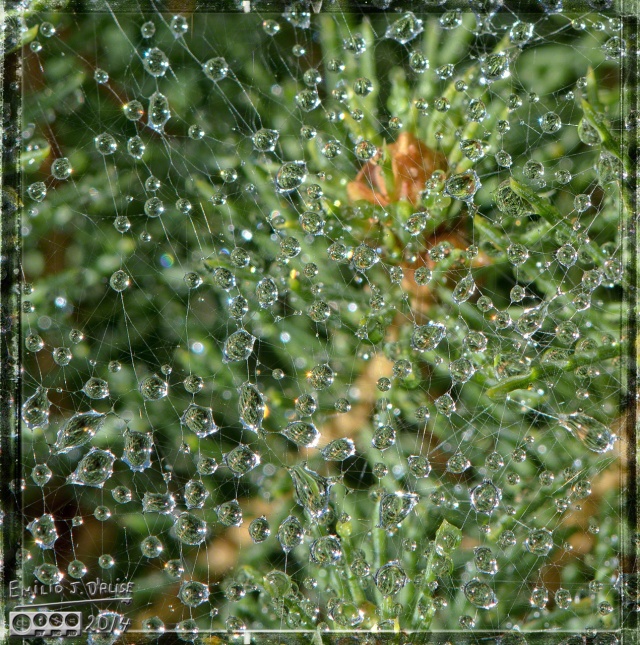 Don’t forget the SmugMug Gallery HERE, or to at least click on a few of the images.