Posted on 16January2014 by disperser

These photos are selected from a much larger number taken between June 28th and July 14th of last year. I decided to leave the individual shoot format in favor of a sampling of shots so as to showcase only what I think favorably represents my flower-shooting efforts. 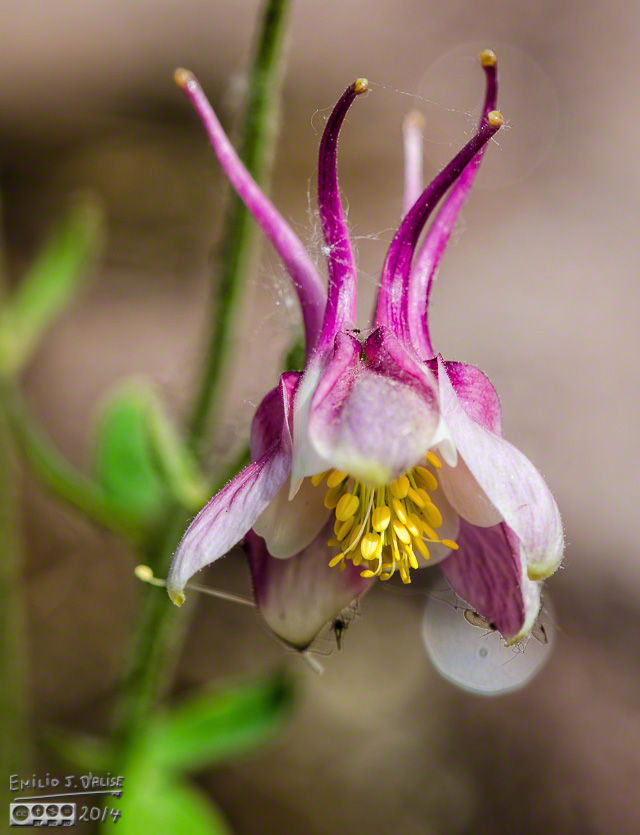 We begin with the same columbine plant showcased in the previous posts . . . what can I say; I like columbines.

This next plant is a tad difficult to shoot, especially when trying to capture details of its structure and texture.

Not only is it difficult to shoot, but I don’t remember its name. I think I identified it once, but I can’t find the reference . . . so once again I’ll make stuff up. 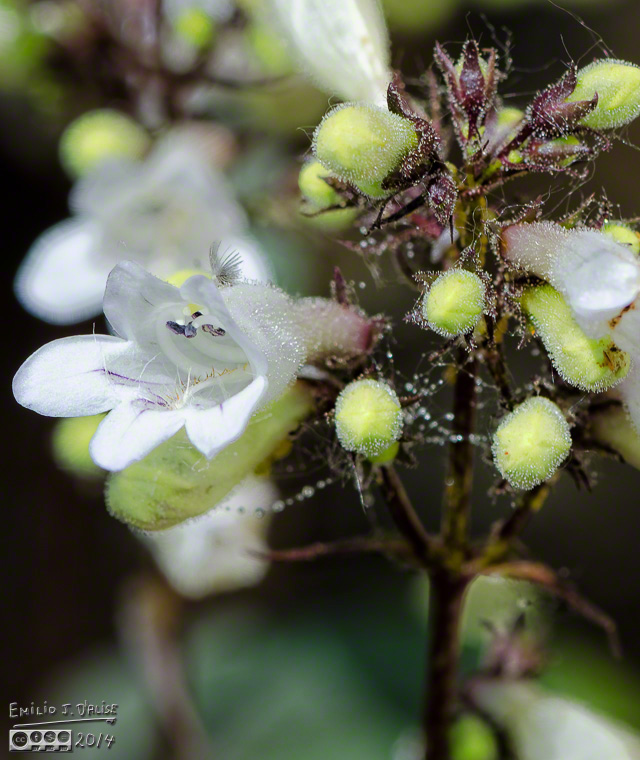 The plant is known as Princess Medium Bloomers. More accurately, that’s the name of the flowers. The name comes from a tragic story of love, devotion, betrayal, and ultimate sacrifice, but since that’s difficult and lengthy to write, I’ll say this is named after one of Prince’s groupies. Specifically, what she threw on stage at one of his concerts. The girl’s name is lost, but the size of her bloomers is immortalized in these flowers.

As I was shooting these flowers, I had a visitor . . .

Petunias have funny names, so it’s too easy making fun of them . . . instead, I’ll tell you where the name comes from. It’s from a largely forgotten language from the Bikini Atoll. After all of the population was evacuated for the then-upcoming atomic bomb test, one of the elders was invited to stay behind and observe the explosion . . . his one word exclamation became the name of the flower.

I’m probably wrong, but as best as I can translate it from what few written records are available, it roughly corresponds to “Holy crap on a cracker!” 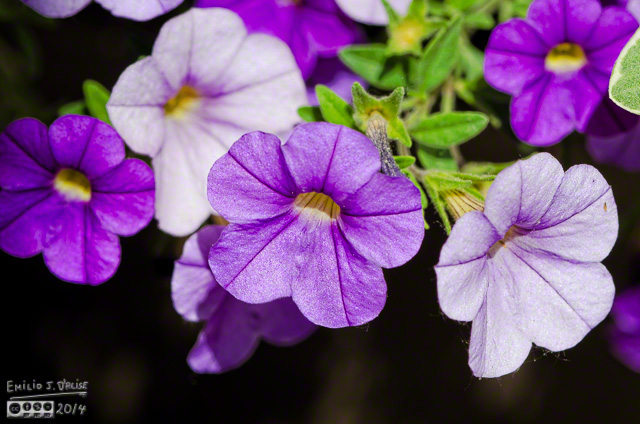 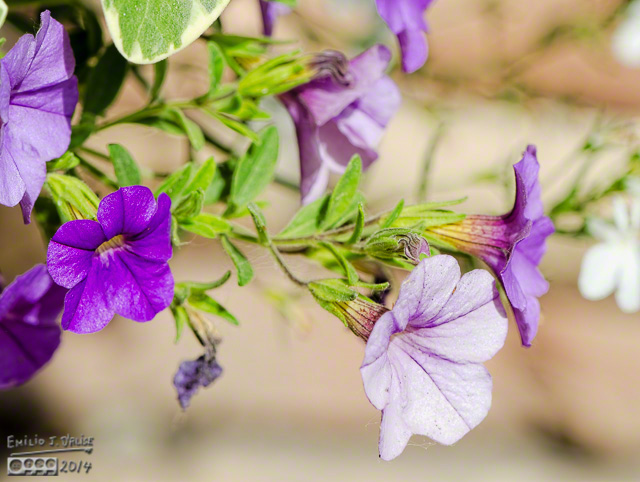 Reader might remember the brilliance of the peonies as they first bloom . . . well, like many humans, they get a tad wide in the middle, and their coloring drifts toward white. Unlike humans, they are still showy flowers.

I want to take this opportunity to apologize to peonies everywhere for comparing them to Paris Hilton . . . please rescind the hit you ordered. I mean, I admire the effort and dedication of the gnat hit-squad you hired, but honestly, I’m tired of swatting at them. Sure, their expressions are funny, but you can only squash so many before they start to all look alike.

Stella D’Oro lilies are named after the company that used to make my favorite cookies in the whole universe: Como Delights. They stopped making them, and for that, they are dead to me now. The company, not the flower.

Well . . . actually, I still like their Classic Breadsticks and Egg Jumbos, but there are no stores within driving distance carrying either of those products.

I don’t know why these flowers were named after Stella D’Oro, but that’s the way it is. Here are two versions of one photo . . . 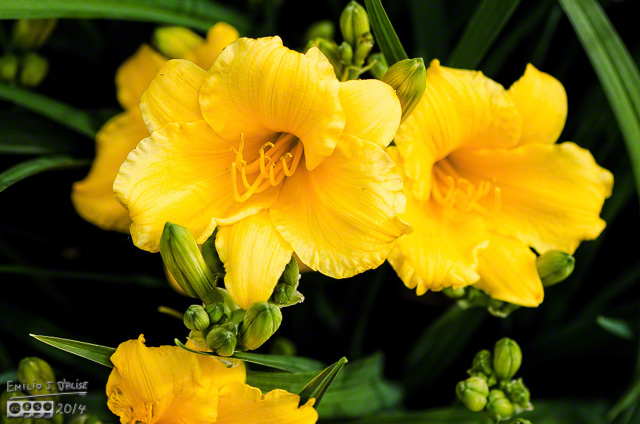 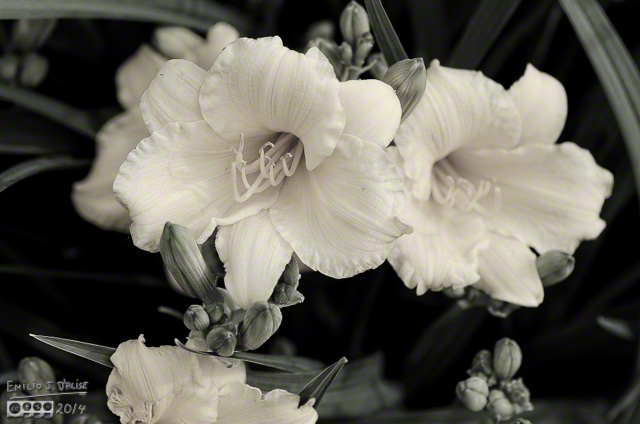 The pink geraniums attracted my eye more than any other flower in the yard. There were the light pink . . .

But getting back to peonies . . . though they lose their color, their structure is still quite interesting.

Like humans, they get a little wrinkly as they age . . . 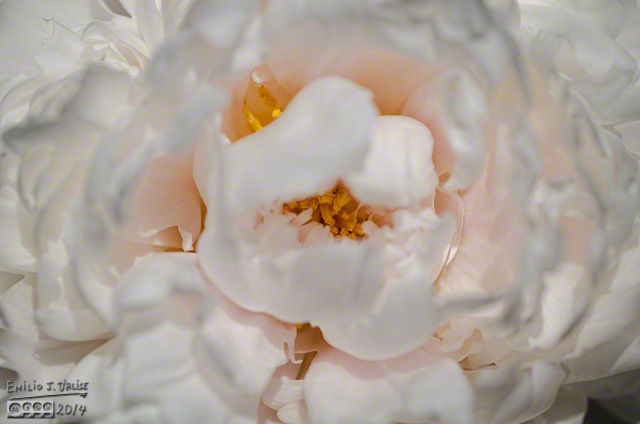 The two clematis I planted last year did not fare well this past year. One did not bloom at all, and the other only managed a couple of flowers.

Clematis are named so because they clam up when you ask them questions.

I’m joking, of course. They are actually named after Johnny Mathis’s cousin, Clem.

I wish I could have gotten a better photo of this fly . . .

I think it’s a Gorilla Mulch Fly, named after the type of mulch it lands on.

Gosh, it’s tiring making up stuff!  . . . let me show you a couple of close-ups while I rest my imagination. 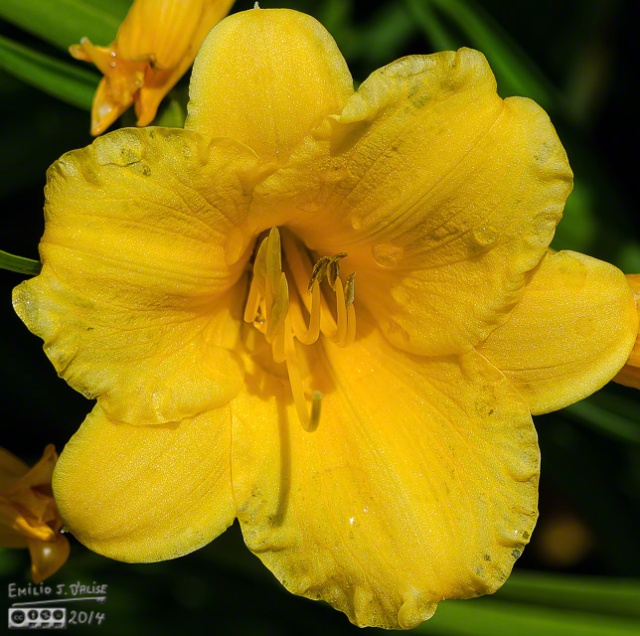 These are close-ups, and even as large as I have them here, they still don’t look as good as they do in the SmugMug Gallery (HERE). Plus the gallery has a few extra shots not shown here.

I would have have said “kabluey”, but must admit it would not be as funny as  . . . PETUNIA!

That’s what others call “selective focus” . . . I call it “mostly out of focus”.

I mean, yeah, the small area in focus is nice-looking . . . but imagine all of the flower tack-sharp.

The interesting thing with these petunia is they did not have that coloring when we bought them. This striated coloring emerged a month or so after we had them. Prior to then, they were solid colored. I don’t know what happened, but I like the look of these.

I especially like the ones about to open . . . they are full of promise, of possibilities, and hinting at an exciting future.

Unlike this Princess Medium Bloomers . . . 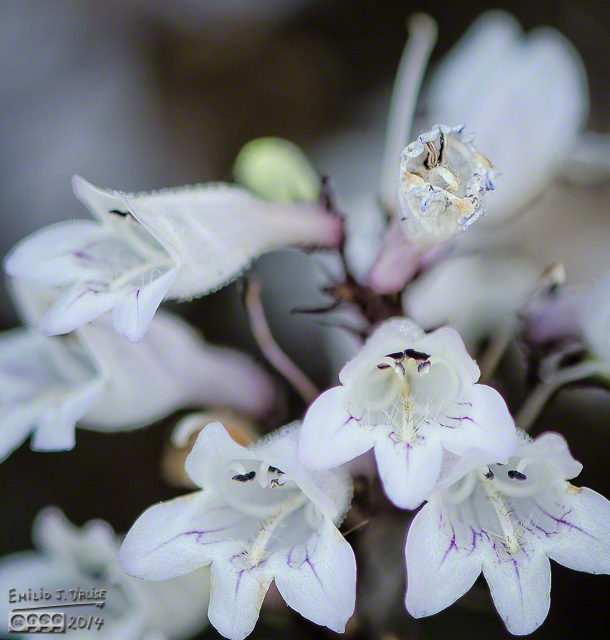 It is obvious the upper right bloom has passed its peak . . . like me, it’s lost the vitality and vibrancy of its youth. 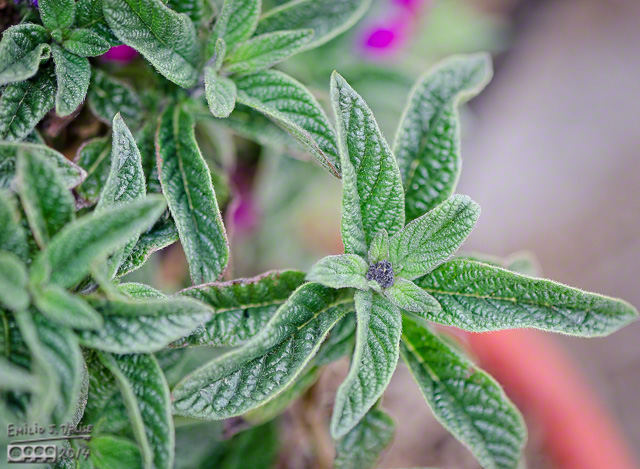 Unlike last year, the plants this year did not grow to their full height, and had few and sorry-looking flowers . . . droughts will do that to flowers, but in this case I think the plant was hurt by a late frost.

So, the bees were not on the beebalm . . . they were over on the Salvia. 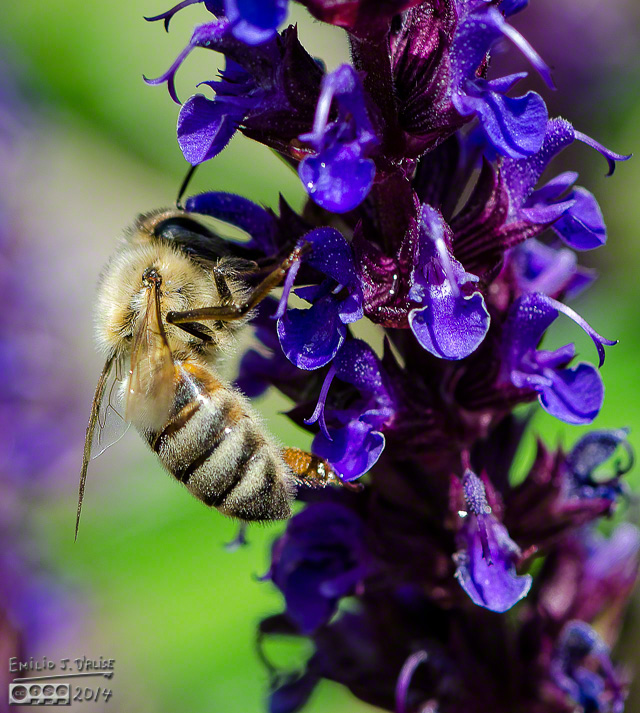 Flowers that did well included the Gran Paradiso Oriental Lilies. 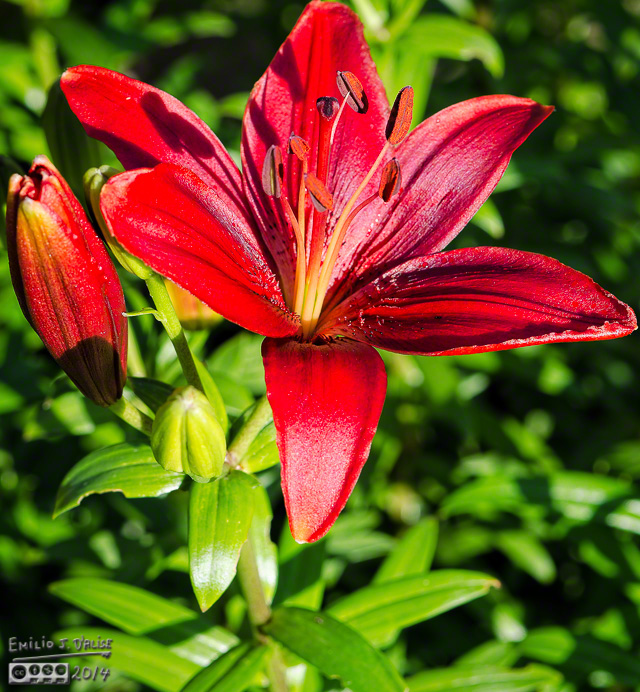 My imagination is still in “park”, so I’ve got nothing to say about their name . . . but I wasn’t the only one that liked these flowers.

Because most of you won’t go look at the full-sized originals, I give you . . . 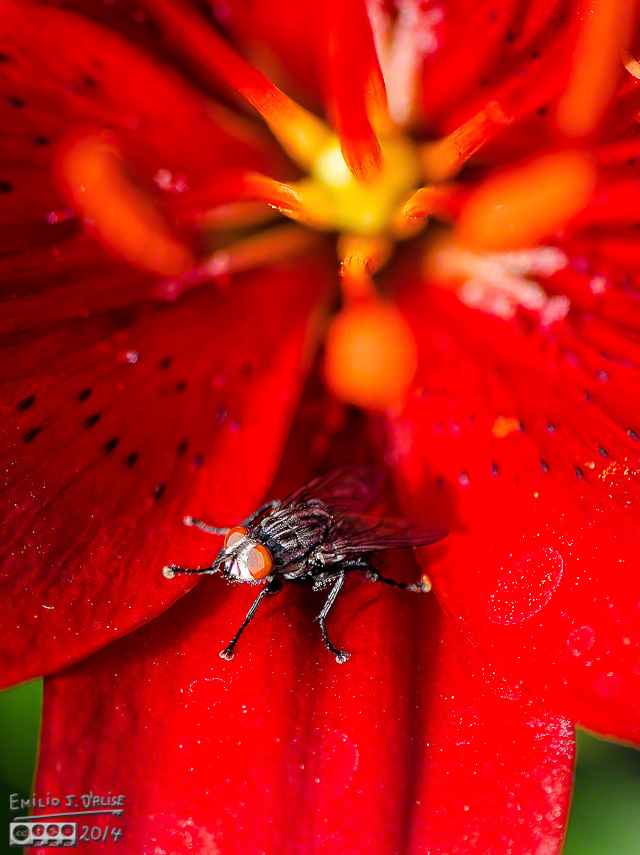 The fly did something that made me break out into song . . .

My heart soared (metaphorically . . . otherwise it would have hurt like the dickens), and I sang out loud, startling my wife.

“I’ve looked at flies from both sides now
From front and aft, and still somehow
It’s Como Delights I recall
I really don’t like flies at all . . .“

Delphiniums look a bit creepy . . . and maybe a tad evil.

There is a most amusing story connected with Delphiniums. Back at the time of Queen Isabrutta, as Cliff Columbine prepared to set sail . . . Hey! A bug!

In my younger days (last year) I would look up what kind of bug it was, but as no one reads this stuff, I now just keep making new stuff up.

The name of that bug is Smitty; she’s a veteran of many campaigns on numerous lilies. Below she is on Lily-57e-OH3, the site of a hard-fought campaign against Killer Gnats. The conflict was written up in the famous book titled “The Better Aphids of our Nature“. 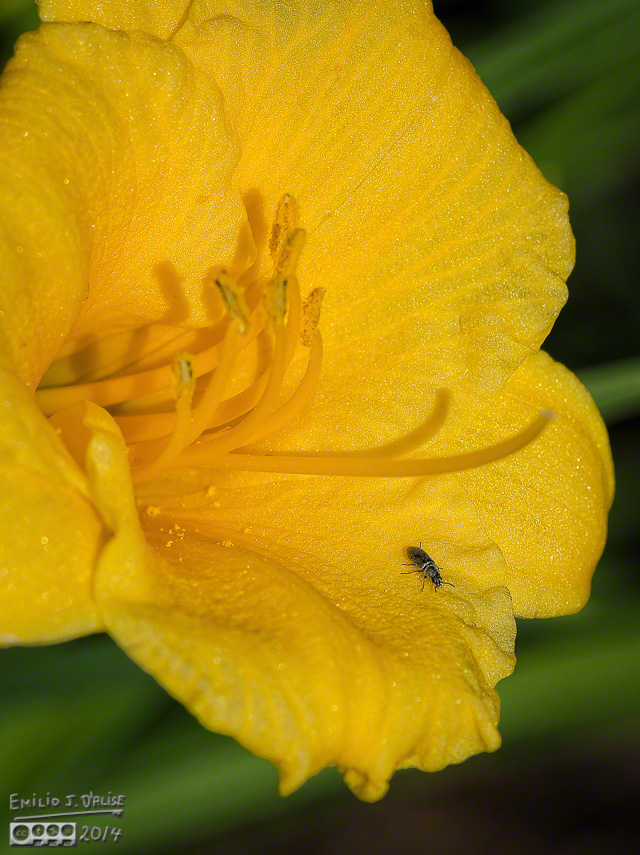 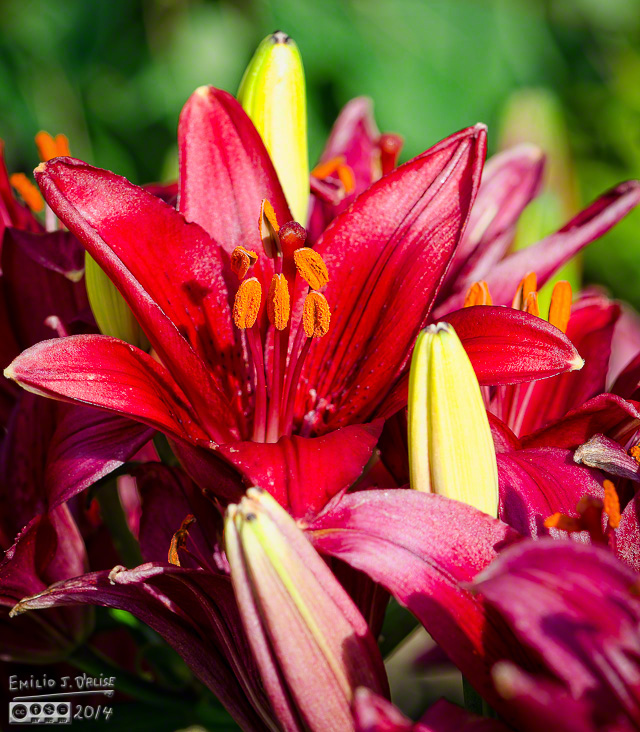 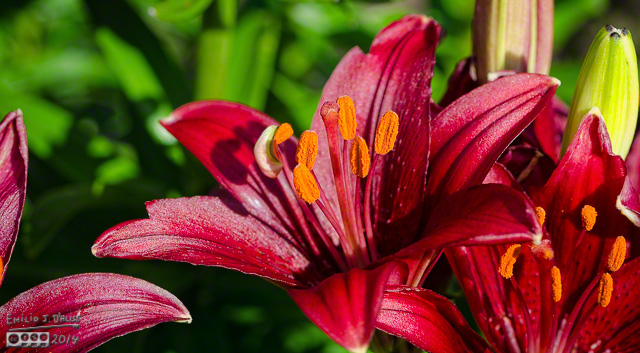 I’m going to repeat myself, but that’s to be expected when I’m trying to log yet another long post. Mainly, I’m trying to see how many readers make it to the end. The goal is to reduce the number of subscribers, you see, and be left with just the hardcore long-form readers.

Sadly, the number of subscribers keeps going up. Not my number of views, so I guess I’ll take the good with the bad.

Again, I’m giving the macro view, but this is really a 1:1 crop of a photo showing the full flower.

And here’s the clematis again . . . I like this photo because it looks as if the tendrils are rising from a cloud . . . by the way, this very flower was also featured HERE and HERE. 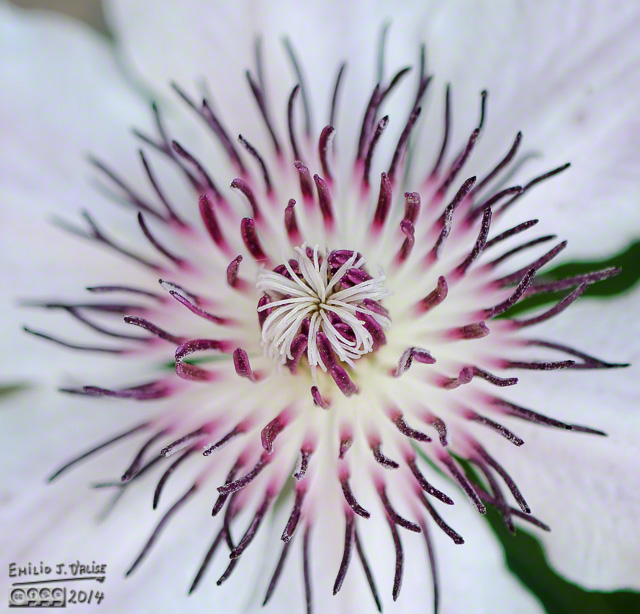 The other clematis plants did quite well (they are now eight years old). So well, in fact, that I had to add additional supports to keep it from toppling.

The purple is a difficult color to get right, and this has been adjusted from memory, but it’s pretty close. Certainly closer than the B&W version . . .

I don’t think these colors lend themselves to B&W treatment, but since I’m trying to drag this post on, let me post a couple of more in color, and their corresponding B&W versions. 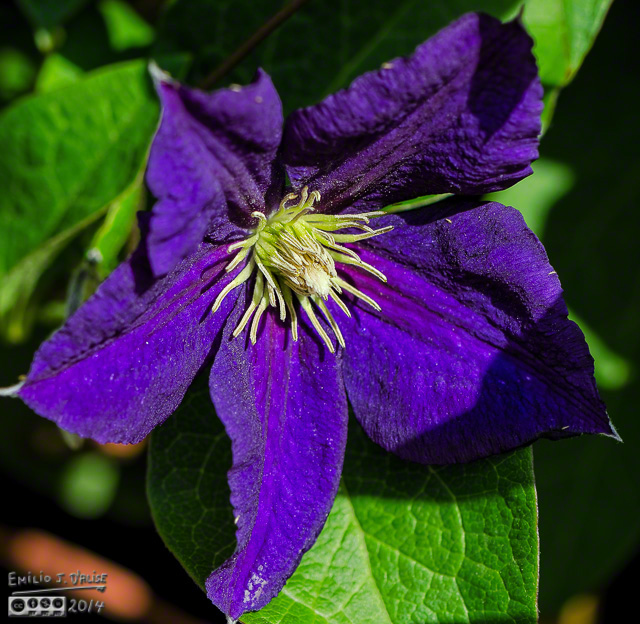 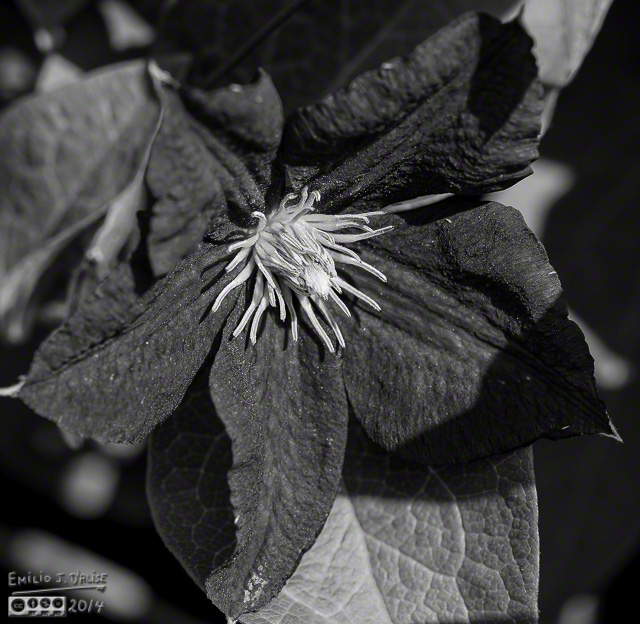 Yeah, not sure it does the trick, but it got me at least a couple of more screens worth of scrolling.

By the way, you might notice small yellowish streaks on the flowers . . .

How about we return to the lilies? 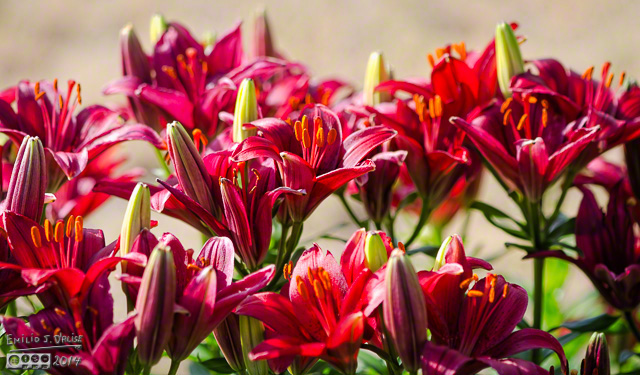 Oh! . . . I just remembered the Delphiniums! 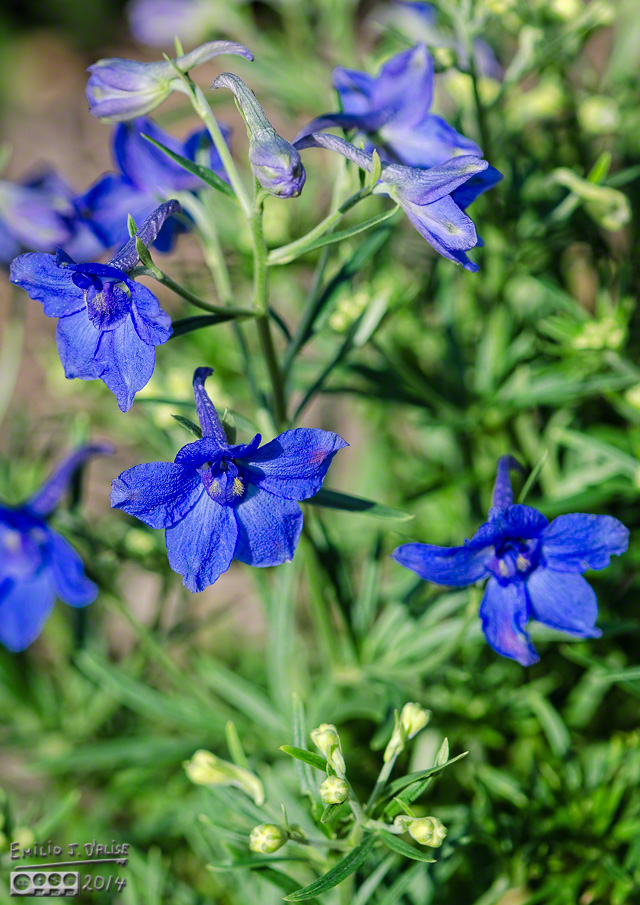 This delphinium looked obstinately pissed off. Dang nab it, there’s no way he was going to open up and bloom.

. . . probably a teenager, thinking the world revolves around their snotty-nosed needs.

Meanwhile, the adult are doing their jobs, fertilizing each other, making seeds, etc. 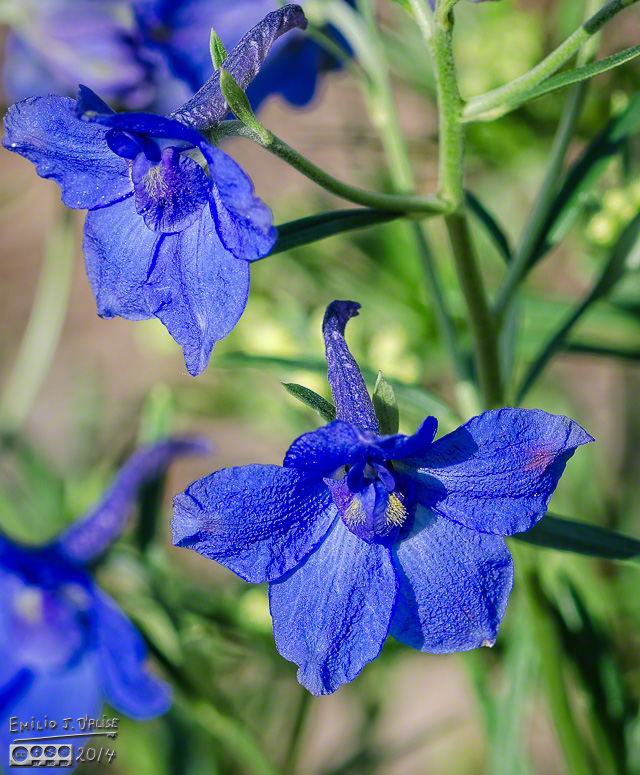 This next shot is not all that great, but I’ve been trying for a long while to get a front shot of a bee . . . so I’ll share it despite the slight blurriness. 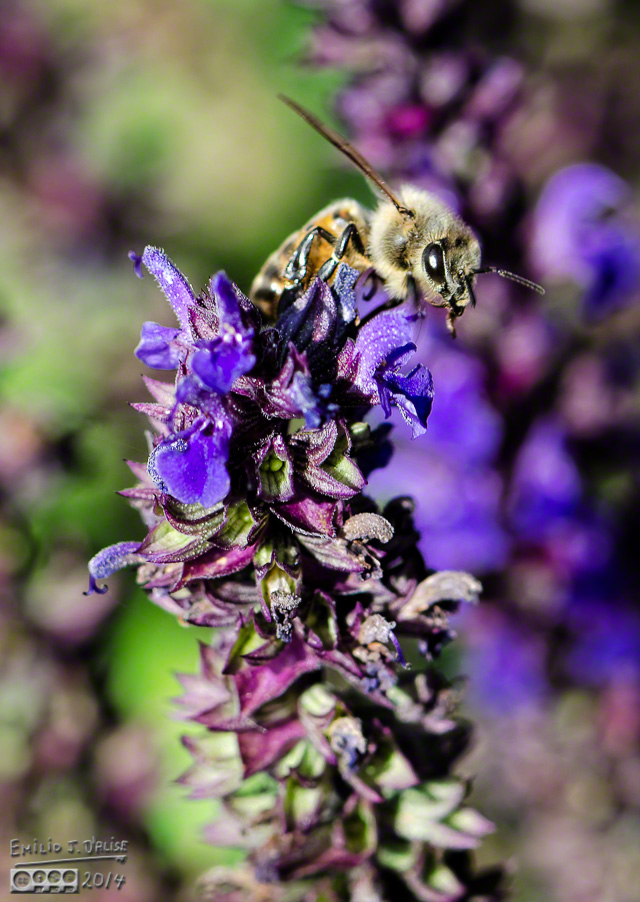 OK, I’m going to wind down with petunias . . . . here are a small sample of what’s in the SmugMug Album. 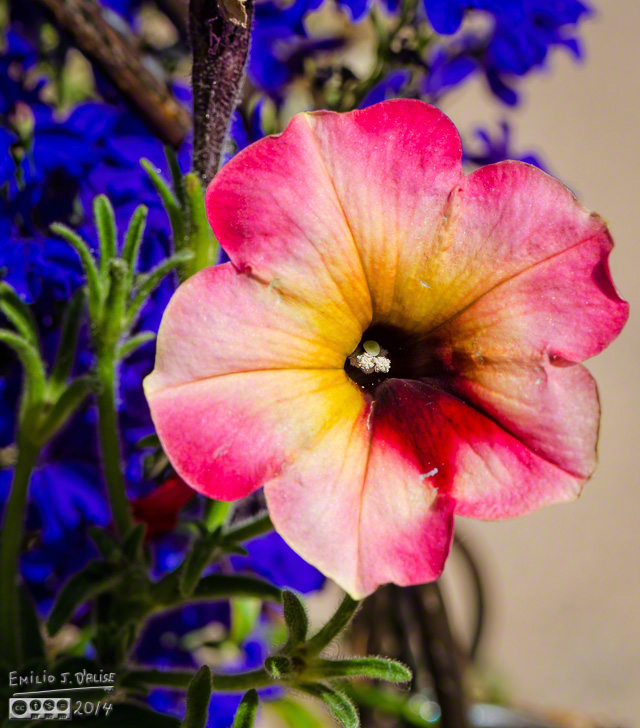 Next are two partial-focus shots I was going to combine in Photoshop to get a layered fully focused shot. Unfortunately, they did not line up as well as I wanted.

Therefore, please look at the next two shots, fix in your mind the parts of each that are in focus, then close your eyes and merge them in your mind. Do it look nice?

And in closing, I was shooting this petunia . . .

. . . when Guido dropped by. Guido is the familiar for the local vampire bats. He runs errands for them during the day. 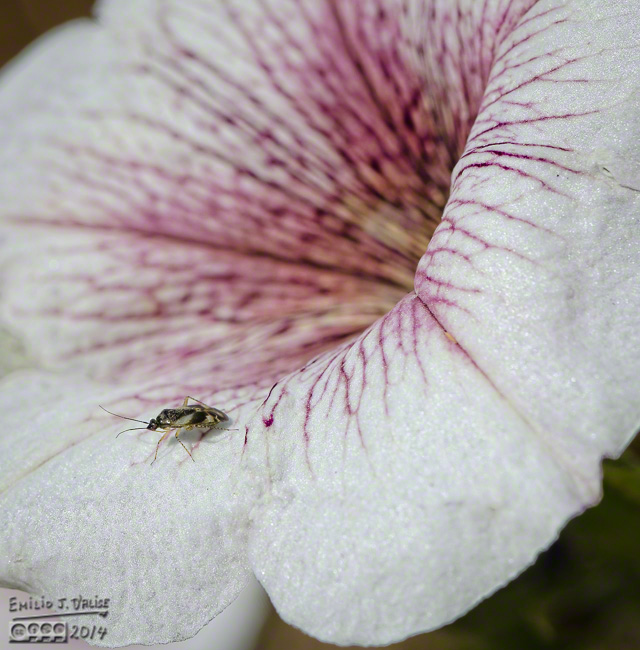 Well, if you made it this far I’ve obviously failed.

However, as I often say, it might be worth going to the SmugMug Gallery HERE. 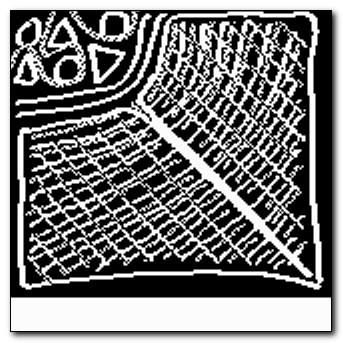 33 Responses to Flowers in Focus