I tend to look up a lot.  Perhaps it’s the hope of finding an escape from this rock, a portal that briefly opens up and offers us the change to leave all the crap, and travel to a better world . . . or, I just like the sights.

On one of the many instances rain chose to bypass us, it still offered up a sight that, for a bit, lifted my spirits.

But it’s not just rainbows . . . this next sight was captured one evening on my way home.

I keep thinking I’ll see a massive spaceship break out of one, filling the sky with the hope of meeting intelligent beings.  Then again, they would have come here on an election year.  How smart could they be, really?

Whenever there are clouds out and about (a relatively rare occurrence where I live), I make it a point to pay attention as the sun goes down.

I invariably have to greatly tone down the photos just to be able to see some detail.  I can zoom in, and expose just for the bright areas . . .

or I can take a panorama to try and capture the majesty of the sight.

Still, unless one has a massive monitor, they don’t get anywhere near the impact.

Photos in portrait mode tend to show more since the post limit how wide a photo can be, but there is no vertical limit (practical vertical limit – I’m sure there is a limit).

Sometimes, when the sun has already stopped playing at the horizon, it sends a few stray rays to light up some of the higher clouds.  This was one such case, and here is the sequence of that particular game (presented without captions). 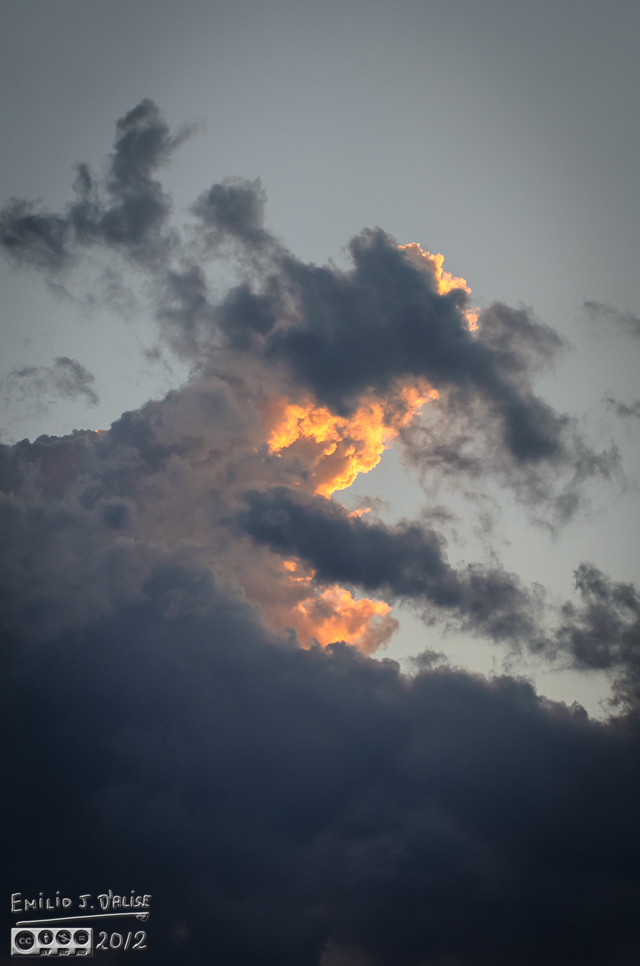 Keeping with clouds, these next few were shot from my deck looking approximately North, where most of the rain seemed to head.

A few weeks later, under a heavy cloud cover, the sun punched through for another dramatic sunset.  While not as sweeping, it was nonetheless intense in its fierceness.

Of course, it’s not just clouds.  For instance, I always look up at Pikes Peak.  This time of year the light is at the right angle to let me see the Dog on the Mountain.

All of these shots were in the early evening, before the sun had set.

I would quote lines from Nights in White Satin, but that would just make me nostalgic for decent music.

As usual, the photographs can be seen in higher resolution, more detail, etc. etc. in the SmugMug gallery (click HERE).  Thanks for stopping by and perusing my stuff..