Posted on 21April2012 by disperser

Edited to Add:
WordPress keeps dropping the links associated with each photo, so here’s the direct link to the SmugMug gallery where one can see full resolution of the originals, and camera info:
http://ejdalise.smugmug.com/Other/Astral-Matters

Please ignore the instructions to click on each picture, and just go to the gallery to see all the pictures. Thank you.

Gather around boys and girls, uncle Disperser is gonna do something ey-jucational.  Yep, almost like community service, except this is voluntary.

Today we are going to look at the sky.  The March sky, to be precise.  Last month (March 2012) we had a couple of interesting astronomical occurrences.  That’s “astronomical” as having to do with astronomy, and not “astrological” which is about delusion, ignorance, and superstition.

I am referring to the natural wonders of the night sky.  Actually, it’s the day sky as well, but it’s harder to see in the daytime.  You’ll have to excuse my less than stellar (get it? Stellar . . . never mind) efforts in nighttime photography.  I keep saying I’ll get serious about it, but everything takes time . . . you remember time, right? They say time flies like an arrow, but fruit flies like bananas  . . . . . . . . right, on we go. 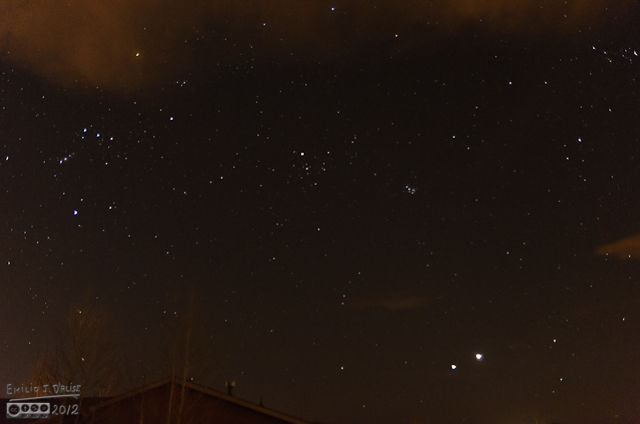 This shots shows Orion, The Hunter, on the left side of the picture, Taurus in the center, and the Jupiter and Venus conjunction of 2012 on the lower right.  You can go see the larger original at the SmugMug gallery by clicking on the picture (any picture).

Because it is a crappy photo, I’m inserting the following: 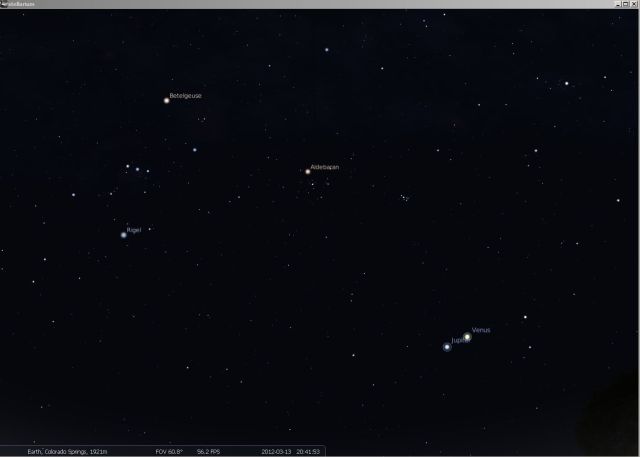 Click on the picture to see a better view (it will open in a new tab or window).  That is a screen capture from the FREE program Stellarium.  If you are at all interested in astronomy, you should own this program.  Here are a couple of more screen captures. 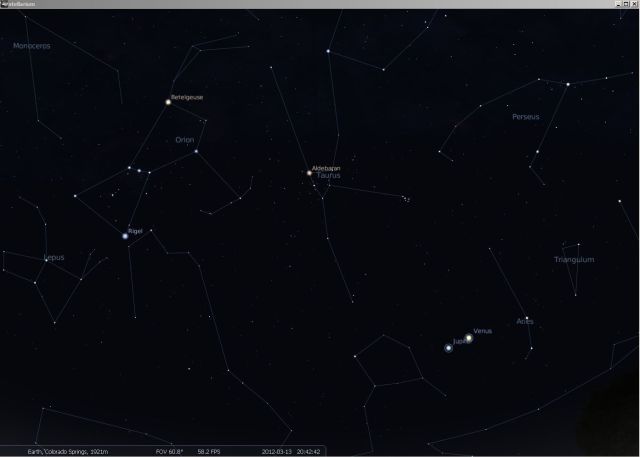 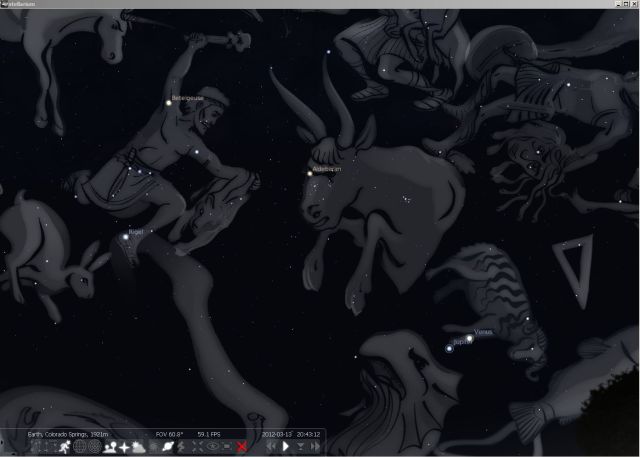 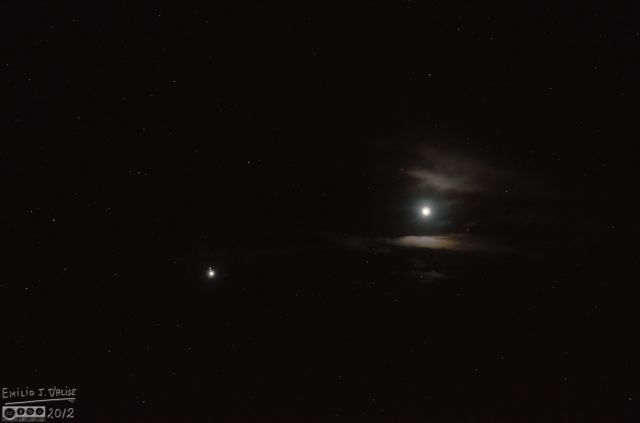 But the show on this particular night was the proximity of Jupiter and Venus.   A few clouds give the shot a bit of character. 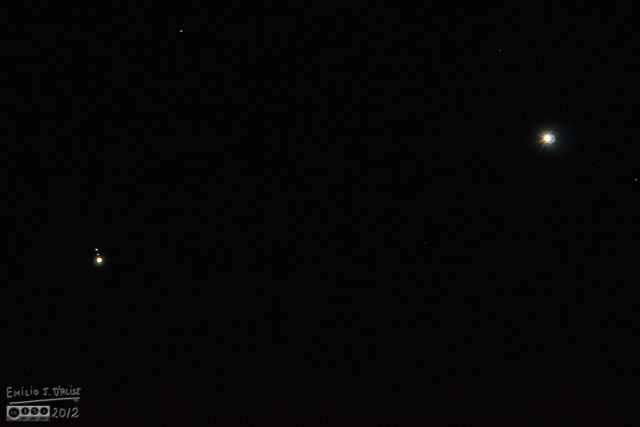 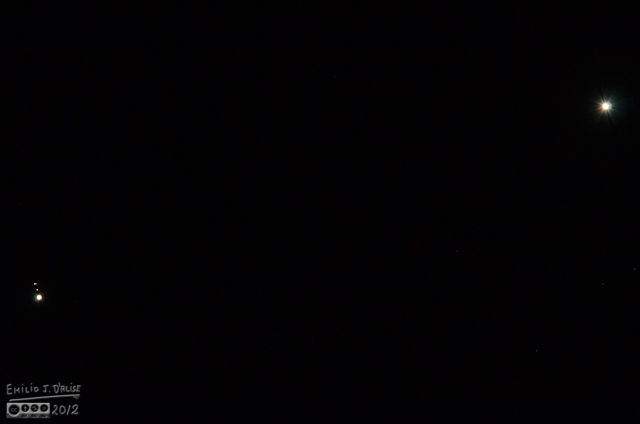 Au contraire . . . there are four, of which we can see three.  Two are really close, one is on its own, and one is too close to the planet to see.  How do I know this?

This little applet can be found here: http://www.shallowsky.com/jupiter/?

As can be seen by the position (click on the picture – the up direction on the diagram is almost the same as the right side of my photo), the top blob on my picture is two moons close together, we can see the lone one in the middle, and one is close to the planet and probably gets washed out because of the brightness of it.

How cool is that!! . . . and you can do the same thing . . . go to the applet and it will show you the position of the Galilean moons for the time you entered.  Then, grab a cheap pair of binoculars, which will still be better that what Galileo had, and go look at Jupiter.  You should be able to see the moons in those same positions.  Ain’t science wonderful?  For this post, I entered the date and time when the photographs were taken.

Anyway, back to the post.  If you go back and look at the Stellarium screenshots, and you look to the right of Taurus, there is small cluster of stars (also visible in my photograph).  That is the IC 349 Nebula. 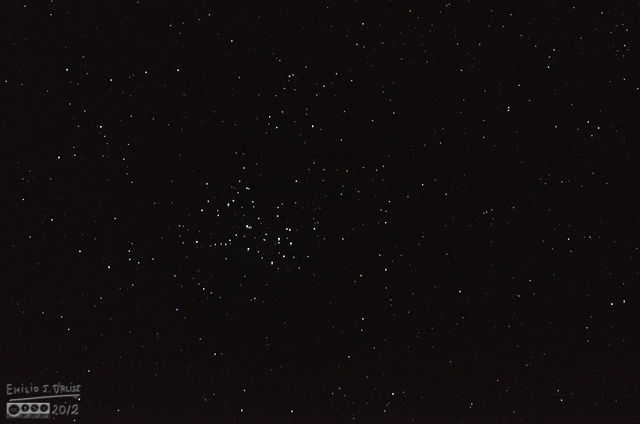 Now, for these next few shots, play the YouTube movie and listen to it as you read on.

This next photo is a shot of Orion’s Belt.  The three aligned stars are easily recognized in the sky. The pink glob toward the bottom left is NGC 1981, part of Orion’s great nebula, and an active star nursery. No, not spoiled young women without underwear and spoiled young men on drugs . . . actual stars. 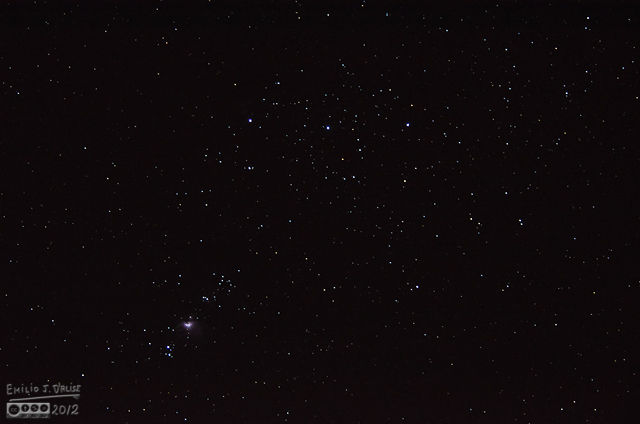 Just to finish up the series from the 13th of March, this next one is Betelgeuse (the reddish star in the picture.  It sits above the belt, and perpendicular to it. 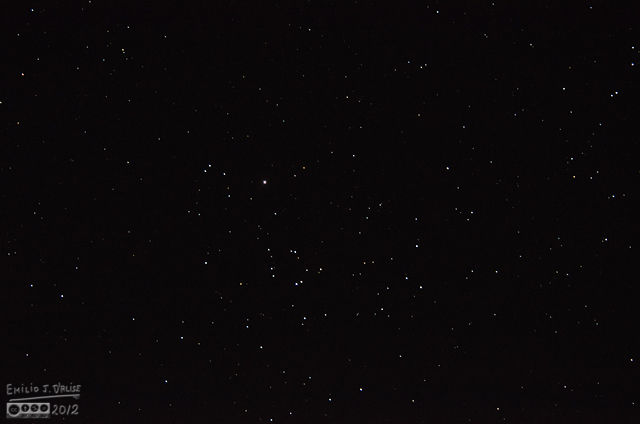 Look back at the first picture and you can see the belt, the nebula, and Betelgeuse in the upper left corner.  You could also go read my flash fiction inspired by Orion, The Hunter, but you don’t have to. 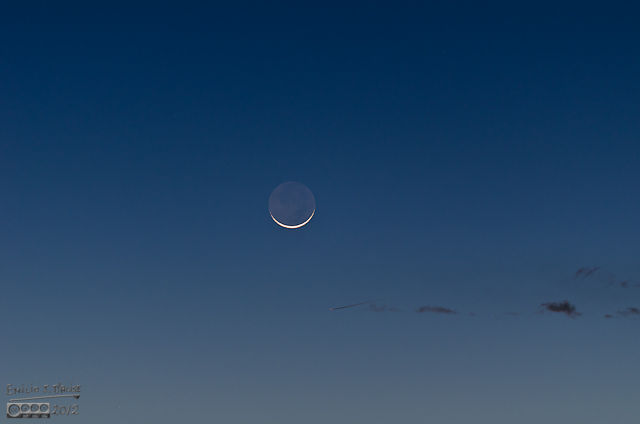 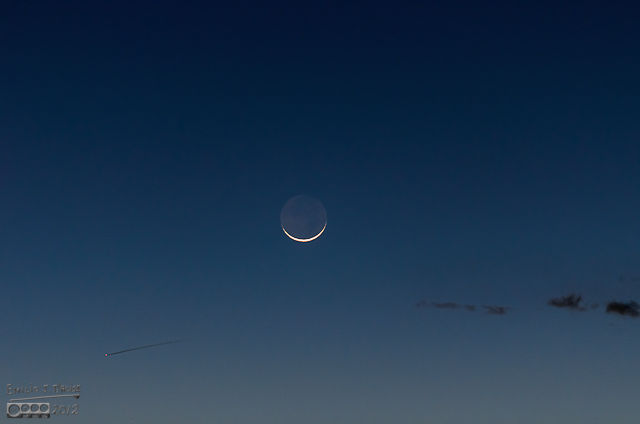 23MAR2012 – ejd crop -That is the moon’s very slight crescent . . . and the face of the moon illuminated by Earth Shine, or sunlight reflecting off the Earth, and lighting up the side of the moon facing away from the sun. 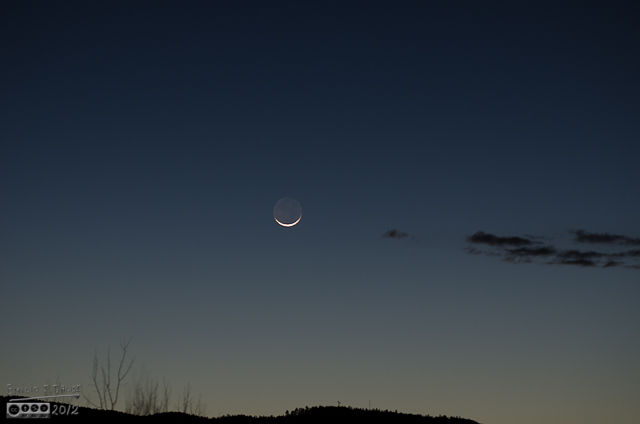 23MAR2012 – ejd crop – Pretty cool, eh? Also why vampire would not fare any better at night than they would in the daytime. 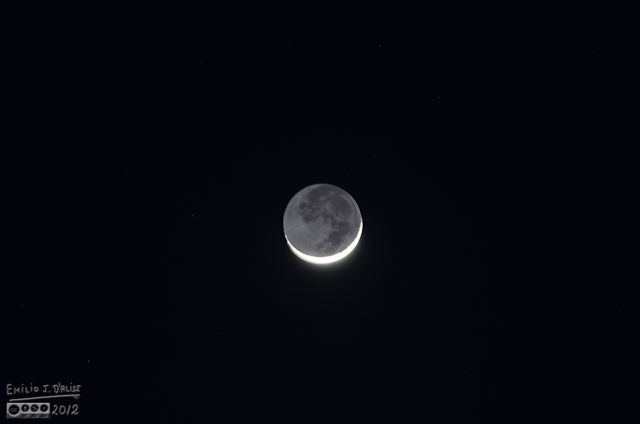 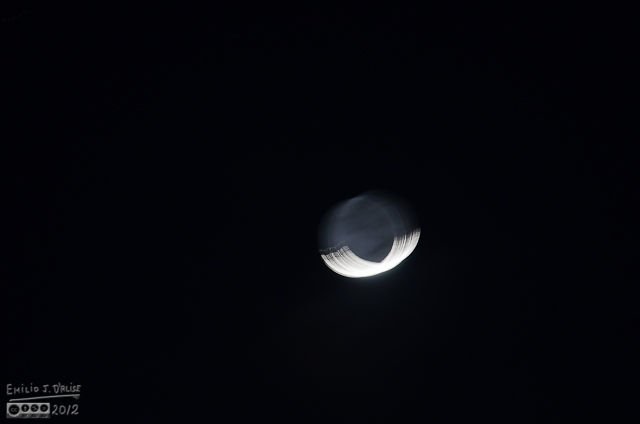 24MAR2012 – ejd crop – And this is what happens when a strong gust of wind shakes the tripod and camera.

The reason I was out on the 24th . . . another Jupiter and Venus alignment, and this time with the moon.  Here is a screenshot from Stellarium . . . 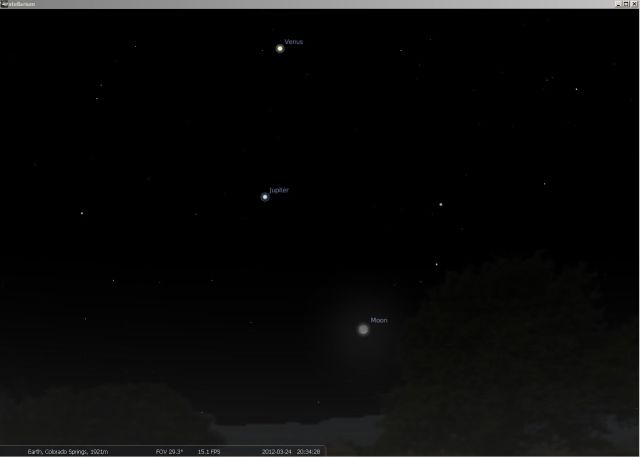 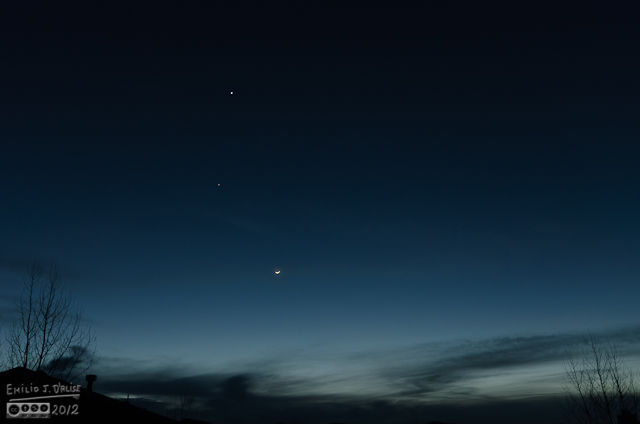 Let’s see where them Galilean moons be at . . . 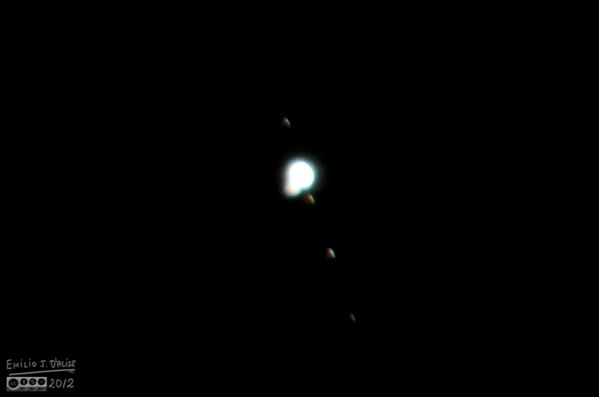 OK, the picture is a little blurry . . . the gusting winds made it difficult to get sharp pictures, but I was happy with this.

And there you have it . . . my short foray into astronomy, photographic celestial objects, and trying to point out the kinds of shows available to us if we just look up once in a while.

As always, I remind people SmugMug offers better quality versions of the photos.  And as always, I thank you, the two people who actually read all this to here.

. . . even if you are not a Jethro Thull, this is a beautiful acoustic version of “Wondering Aloud”.  It has nothing to do with this post other than it is a love song I like.  There is a line on there that stuck with me from the first time I heard it . . . “we are our own saviours as we start our hearts beating life into each other . . . “.  The complete lyrics are HERE.

16 Responses to Astral Matters . . . or, Better Late Than Never