Because I am pressed for time, I decided to split last week’s trip report into two posts, with the first half dealing with the “going there” part.

“What trip is he talking about?”

“Did they go somewhere?”

“Who are you, and why should I care?”

All good questions.  Let me take them in order.  Last week we went on a driving trip precipitated by me reading the article Visiting the Bear’s House.  I gave a quick preview of it while on the road (if you missed it, click HERE, or just keep reading).

Anyway, we modified the suggested route a bit, incorporating the detour mentioned for the return trip into our getting there portion. 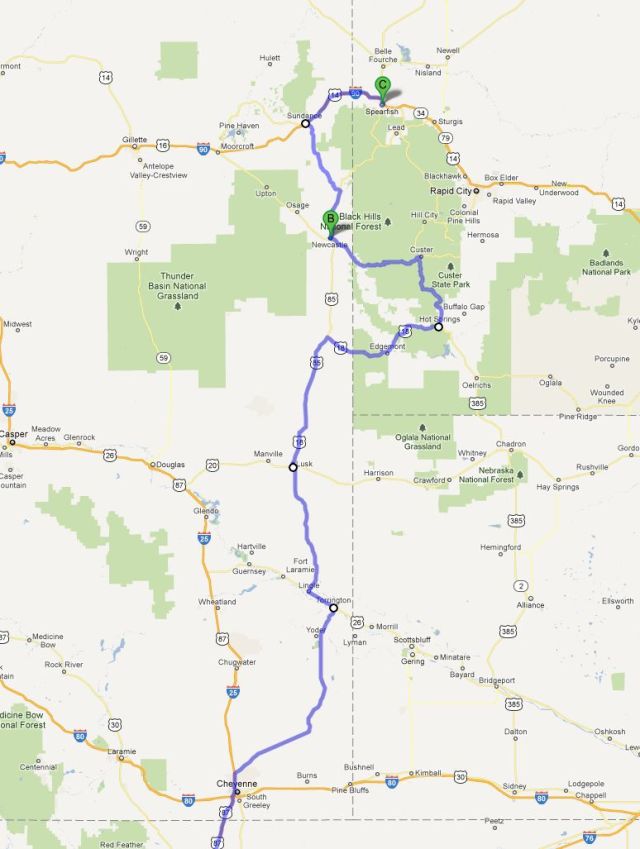 That little jog through Hot Springs and Custer, South Dakota, was not worth-while.  I mean, it would have been had we planned to spend some time in the places mentioned, but as a drive-through, it was a bust.  Sure, I took a couple of pictures, but the nearly two hours of travel time it added to the trip to Spearfish was not worth it.  It would not have been worth it on the way back, either.

But let me step back a bit . . . we left home around 10:30am, and made our way to the Aurora (CO) Costco.  “Why?” you ask.  Well, we needed gas and food . . . and I looked at bicycles.  We bought sandwiches, salad, sliced vegetables, a fruit platter, and sliced apples.  Other than a small amount of the sliced vegetables, none of those survived the trip home.

We left Costco at noon heading North, driving through the annoying mass of humanity that calls itself Denver.  Normally we would take e-470, a toll road that circumvents this Denver place, but that adds to the drive time, and we were already running late (we wanted to avoid driving at night).

We made our way through Denver, passed Fort Collins, and continued North toward Wyoming.

There is something that happens to me when I cross into Wyoming.  My spirit lifts (well . . . I don’t have a spirit; more like my mind tells me to be a little happier), I relax, my breathing slows, and my blood pressure gets down to normal.  Wyoming, you see, has more cows than people . . . and cows don’t drive.

I differ from most people, and even from my wife insomuch that when I look at vast open expanses with nary a sign of human presence, my first thought is “I could live here.  I could be happy here“.

Heck, I would not even mind some of them cows as neighbors. 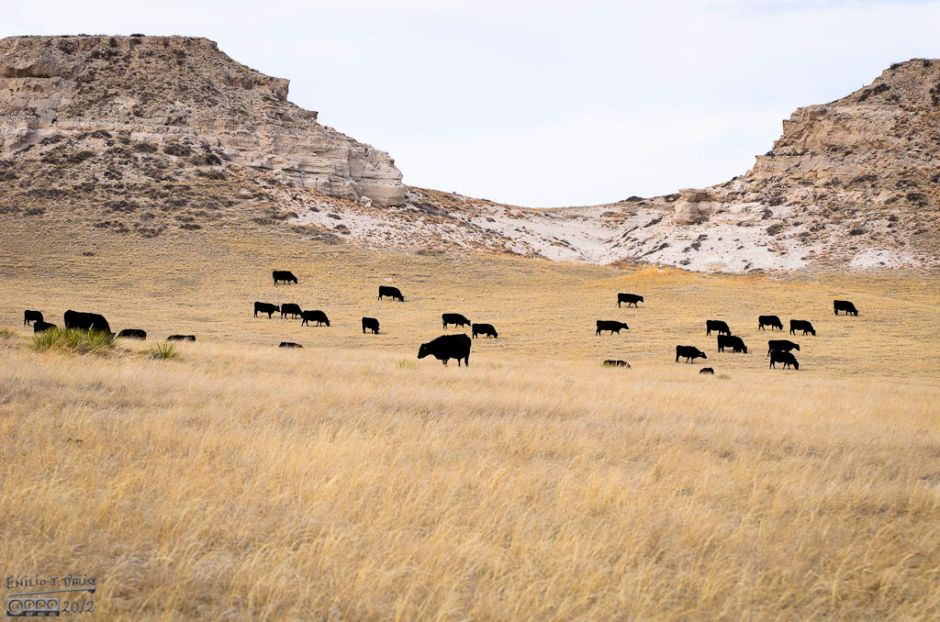 As my mind wandered and swam in endorphins-induced bliss, Melisa brought me back to the present  . . .  “Antelopes!”  I mean, we’d seen a bunch of them, usually grazing in the distance, but these were lying down not fifty yards from the edge of the road.

I stood on the brakes, and pulled over.  I’m sure had there been any other car within a mile of me, they might have been concerned at my sudden maneuver.  As it was, only Melisa witnessed my cat-like reflexes which, coupled with enormous mastery and control of our Tahoe, brought us to a halt nearly parallel to the Antelopes.  As it often does when I drive it, the Tahoe must have thought “WHAT NOW?!?” even as it obediently complied with my wishes.

These things were a hundred yards away before I could bring my big lens to bear, seeking to freeze them in time.  I could almost hear Flock of Seagulls . . . “And they ran, they ran so far away”.  (Yes, I know I changed the lyrics). 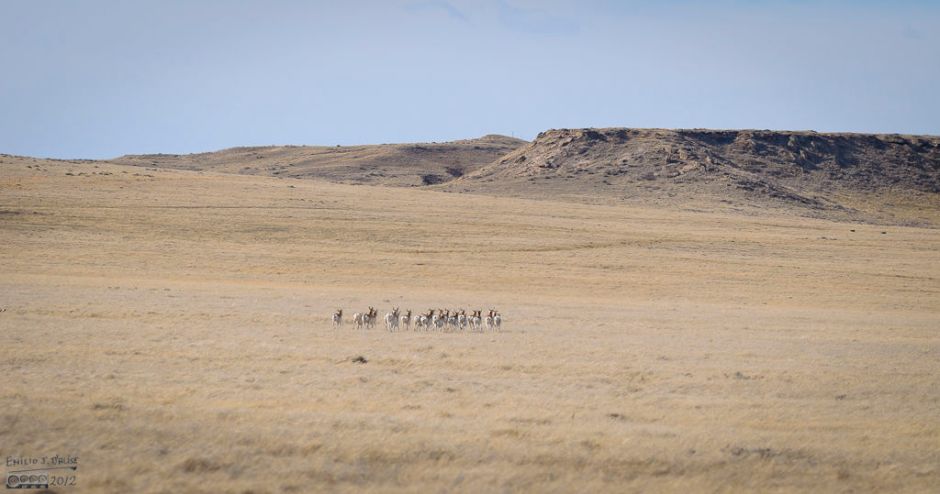 I thought their reaction was a tad disproportionate to the threat I posed.  We’re talking multiple football fields in distance here, and this without me making any effort to give chase.

I watched them run . . . and turned back toward the car.  On the way I saw an interesting dried flower (or something), and I took the shot.

Since I was not quite up to speed, I pull over again, and grabbed the camera . . . .

Lesson learned: Antelopes are not partial to old men with cameras.

By the way; astute observers might notice wide variations in the brightness and tone of the pictures.  This cloud, you see, was playing defense on the sunlight.  Or maybe the sun was playing hide-and-seek.  Whatever the case, many of the shots were in the shade; a crappy kind of shade that washed out everything into blaahness.

Eventually we got to our turn-off at RT-18.  As I said above, I could have done without this leg of the trip, but I did get some nice photos.  For instance, these Antelopes were running alongside the road as I caught up with them.

In Custer State Park proper we did have a couple more shooting opportunities.  When I say “we”, I mean “me”.

The thing is, I can’t really imagine backups here.  We did not pass any cars, and only a couple of cars passed us up while I stopped to take pictures.

Eventually we got onto US-14 (could have taken it to Yellowstone if we wanted, and if Yellowstone had been open).  There I had another photo opportunity.  A burned-out hill.

Because of this little detour, we ended up in Spearfish (SD) well after sundown.  The worry, you see, with driving after sundown is hitting a deer.  Luckily, with no other cars on the road, I was running with my brights on.  Unlike my previous GM cars, the Tahoe has fairly decent brights.    We unloaded, ate, and that was the end of the first day . . .

Bright and early the next day (8:00 o’clock, or so) we embarked onto our second leg of the trip.

From Spearfish we head back toward Sundance.  There sat a statue I wanted to photograph.

I took a number of photos, and they can be found . . . where else, the SmugMug album associated with this post. Click on any photo to go there. 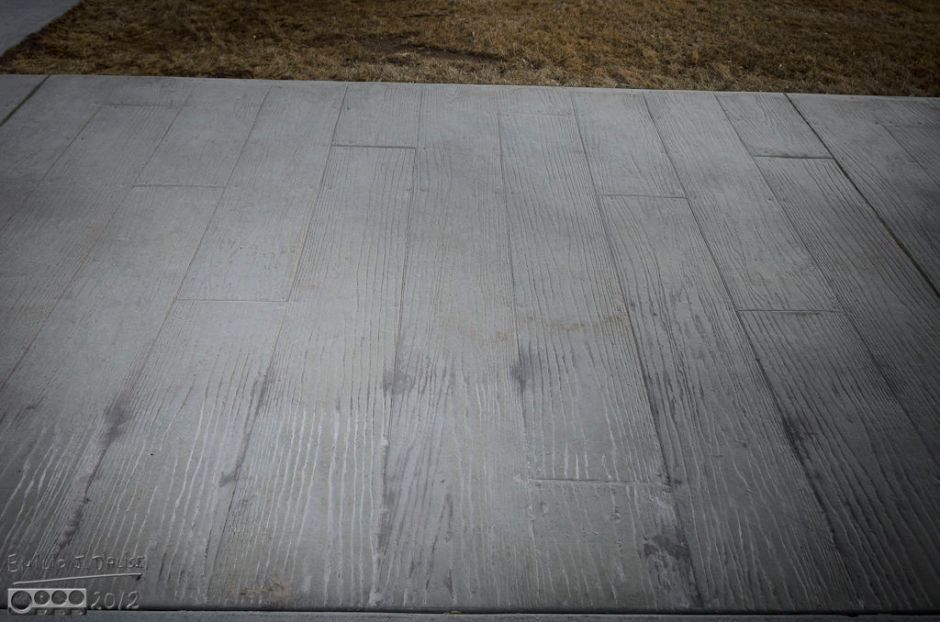 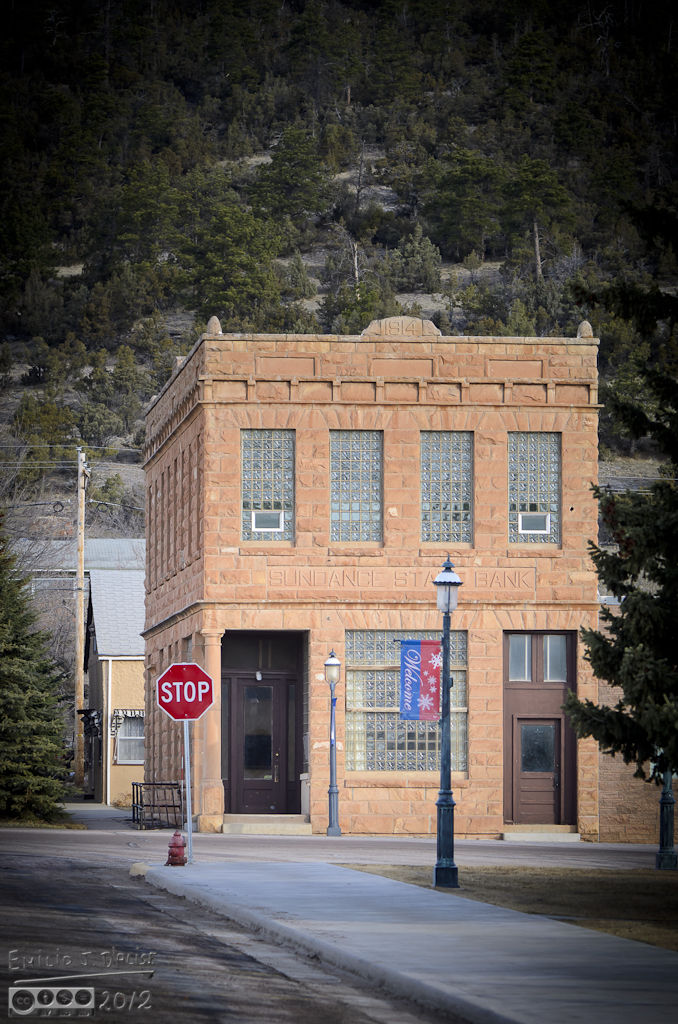 Don’t know enough about Totem Poles to know if this one came directly from Poland or not.

The last picture is that of the bar . . . also across the street from the sidewalk by the statue.

And that was Sundance, Wyoming.

The next stop is Devil’s Tower, but I’m saving that for the next post.