PATH 006 – Photos Around The House: The Waka

Posted on 4March2012 by disperser

Hawaii is a favorite destination of ours.  Off-and-on we toy with the idea of moving there, but we are too chicken to act on it.

People are quick to say stuff like “That’a a GREAT idea!!  You should totally do that!!”

I know they are just trying to get rid of me, and put some serious distance between us to boot, but really, they could be a little less obvious.

The truth is we did that once.  Not move to Hawai’i, but made a major move. We sold the house, sold a lot of stuff, got rid of lots more, and moved halfway to the other side of the country.  We can certainly do it, but we only have one more move in us.  They are going to bury . . . er . . . cremate us wherever we end up next.  So yes, Hawai’i is a consideration . . . as is Alaska, Arizona, a couple of foreign countries, and, if we get lucky and hitch a ride, Alpha Centauri.

A model trying to represent the idea of a Waka - a Maori migration canoe.

Were we younger, and living hundreds of years ago, we might have hopped on one of these . . . a Maori migration canoe, or “waka”.

We bought this particular model on the Big Island of Hawai’i during one of our many trips.  It was x-mas time, probably in the mid-90’s, and we are walking through a shop looking for something to bring back.

Made from rolled paper, pieces of wood, and a few scrap materials . . .

This boat catches our eye . . . it’s construction is odd, but appealing.  In those pre-TSA-We-Touch-Your-Crotch days we traveled with hard-sided suitcases that could be locked.  The boat made the trip back home in one of those, but the oars got slightly bent (you can see the creases).  I’m also not sure about the position of the sails . . . The way they are set up they would not work . . . one would catch the wind of the other.

A blended-layers version of the previous shot. Some places it did not blend well, but the details came out well

The SmugMug gallery has photographs from different angles.  For each view, there is a shot at f/22, trying to get lots of depth of field . . . 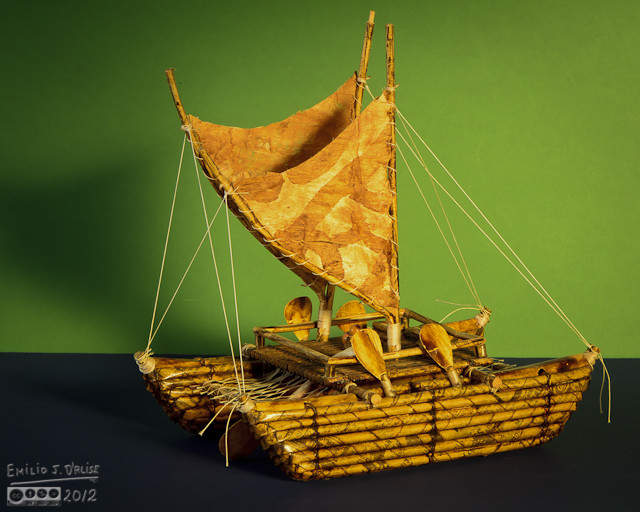 Then there is a Photoshop blended layer shot . . .

. . . which you can tell from the odd fringing visible in almost all of the shots . . .

And a different processing of the f/22 photograph . . . 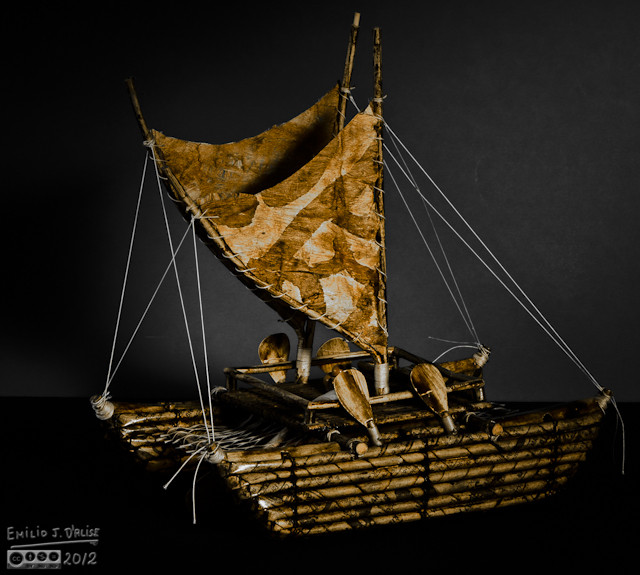 I call it my quasi-Black-&-White shot . . . I just thought it looked neat.

I was going to do a lot more with the photos . . . B&W, different processing, some art-work, and other stuff.

Alas, I’m running out of time for putting up a post for the day (more on that later).  In fact, I have blended layers shots which I will not be able to process because they take time and it’s getting late.  So, I’m just going to show some of the ones in the gallery, so I can wrap this up. 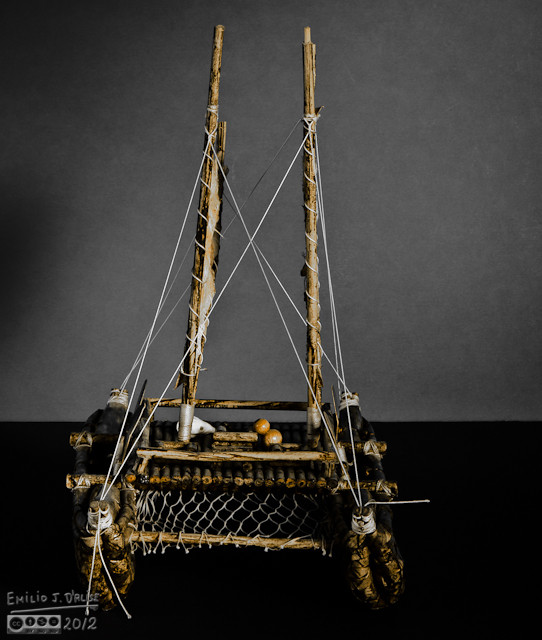 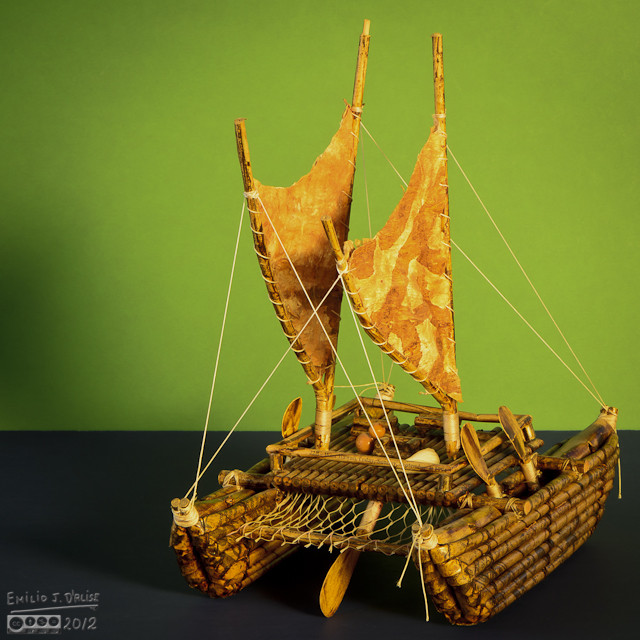 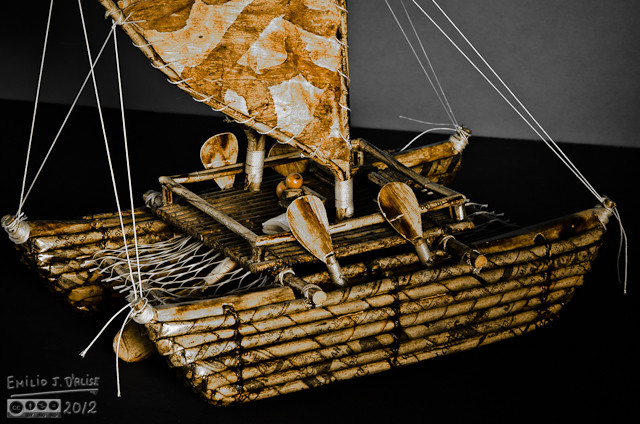 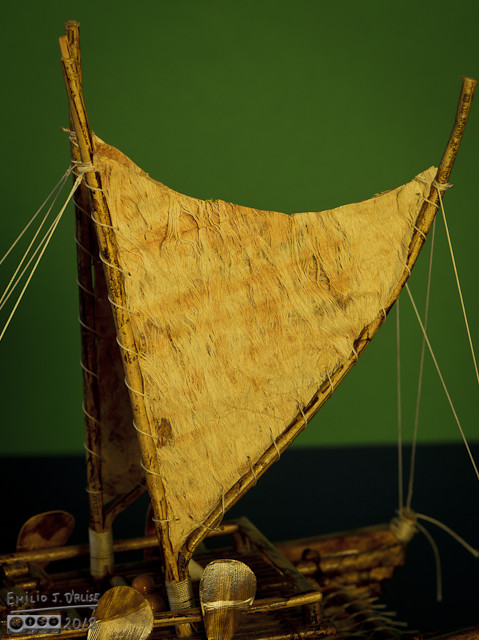 People might wonder about the golden cast to the pictures.  I thought it would go well with the subject.  And no, it’s not done by manipulating the photographs.  These are pretty much the way they were shot.

I had a relatively small window to shoot using the sun as it was setting, but I knew it was going to be too bright.  I lack a proper studio (don’t do these kind of shots often), so I set up a make-shift, low-tech, pulled-from-my-nether-region studio.

The set-up for the shots

A white screen to keep direct sun off the subject (and diffuse the light), a gold screen reflecting direct sunlight onto the boat, and two pieces of foam board for the setting.  That’s our kitchen/breakfast table.  That’s the back yard behind my “studio”, and for all them bloggers who have been posting “spring is here” stuff . . . yes, that snow on the ground.

That snow is from over a week ago, and there is still more than six inches covering the grass despite the near-60 degree weather.  Spring for us is 6-8 weeks (and likely a couple of major snowstorms) away.

I must now make a painful announcement . . . I enjoyed tremendously posting something every day.  However, most of what I do requires a large amount of time (four hours today), and it’s just not feasible for me to continue at this pace.

I don’t like the idea of changing the character of my posts.  I want them to continue to be a mix of narrative and photographs (unless it’s commentary or fiction, but that too takes time), so rather than change the format of the content, I plan to change the frequency.

Starting this week (now, actually), I will do regular posts on Wednesday and Saturdays.  I may post more frequently is time allows, but two posts a week will be the minimum.  That should allow me to take care of my other interests, and ensure I don’t just slop something up here.

As usual, thanks for visiting and reading my stuff.

17 Responses to PATH 006 – Photos Around The House: The Waka