In a few of the previous posts I mention going on drives whenever we had guests.  In July 2005, a month after we had moved into our house, we had guests.  The following pictures are from the drive we took out to Florissant Fossil Beds National Park, and the drive back to Colorado Springs on Gold Camp Road.

First up we have the Adeline Hornbek Homestead, one of the attractions of the park.  The homestead sits a bit a part from the park but it is part of it.  Hers is an interesting story, and since there is lots of information on Adeline available on the Internet, I’ll leave it to the reader to ferret it out. 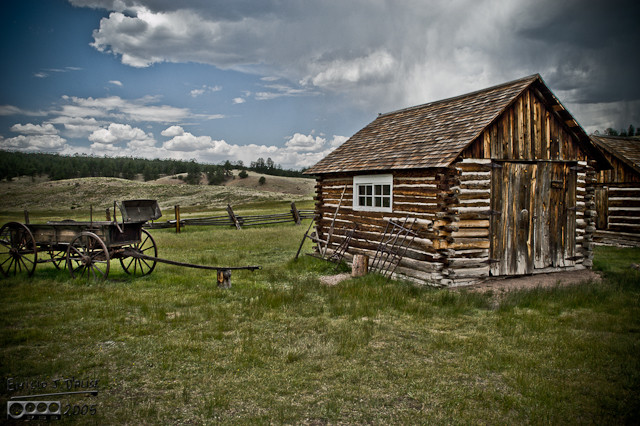 I played with the colors to better show the rain clouds just behind the barn. You can see the rain falling.

As usual, the SmugMug album has a few more pictures, higher resolution pictures, and if you want to zoom in to see the details, they are presented in their native resolution.

I should give a short primer on how I set this up.  Let’s say you are reading along, wondering how someone so bright can mangle the English language so, and you chance on a photo you like.  You put your nose closer to the screen in an attempt to get more of the beauty into yourself, but it’s not working.  In frustration you click on the photo.

Like if it were magic, a new tab opens and now you are on SmugMug.  You take your time, examine the photo, you view it in different sizes, you look at the details . . . you gasp, and realize you had forgotten to breathe, so rapt were you with examining the composition, color, and subject captured so brilliantly by one so otherwise unlikable.

Eventually you tire of it, close the tab, and WHAM! you are right back where you were in the blog post, rapt in word usage that is not quite right, but nonetheless holds a certain fascination, much like what drives you to glance over and try to see what’s happening as you drive by an accident scene.

. . . at least that’s how I envision it . . . in reality, most of the people will miss these very words, having already skipped forward to the next photo.

We spent some time walking around Florissant Fossil Beds NP (there’s really not that much there, but it has some nice walks and a decent interpretive center), and we saw  . . .

This would be one of the pictures you, the astute reader, would want to look at in SmugMug in the original size . . . lots of details.  There are four photos showing details of these strange rocks made from trees.

This next photo shows a small tract of Gold Camp Road.  It used to be a railroad track between Colorado Springs and Cripple Creek (of gold mines fame).

This next picture is taken from the corner you see in the above picture.

Further down the road there was a pull-off, and the opportunity to climb rocks . . .

That’s our B^3 down there, waiting patiently for me to explore and snap a bunch of pictures.

Before I go on to show some of the rocks, I forgot a flower I shot a few miles back.

I will end with rocks, dead trees, and lichen . . . all stuff impossible for me to ignore.

The rock on the left looks like a fade (or a fish) looking up.  A few of the shots, like this last one, were shot using the on-camera flash.  Usually I don’t like augmenting natural light, but clouds had blocked off most of the light, and I wanted to capture the details in poorly lit nooks and crannies.

So, here’s the thing . . . these were from a series of shots I took in 2005, and never did anything with.  And yet, I am sure some people will appreciate them, and maybe even think some “fantastincredible”.  Or maybe not.

Either way, the point I want to make is there are easily thousands of pictures between then and when I started the blog.  Some I used, some are not that interesting, but many are like these; waiting for their beauty to be rediscovered.

Once again, thank you for visiting and reading my stuff.