I’ve documented at least some of the birds of Galveston Bay, but there were other interesting sights there.  This post is a brief overview of the rest of the pictures and movies I captured while there.  As usual, click on any picture to go to the respective SmugMug album.  There are multiple small albums associated with this post.

First off it’s a tie-in to the birds.  The return of the Shrimping Boats.  Every day in the early part of the morning the shrimping boats make their way back to port.

Whatever they are doing, they attract a fair amount of birds.  My guess is they are cleaning the catch or sorting through it and discarding whatever they do not want.

Click on the picture to go to the small SmugMug album and a couple of other videos.

Second up is a Gecko I noticed on one of the small shrubs.  This guy let me get very close, and I got some nice photos with a lot of detail.  It did not appear as if this little guy was too worried about me.

I particularly liked the opportunity to view this fellow in great detail, especially the eyes.

I also shot a few videos.  The occasional noise you hear is the autofocus on the lens.

I really need to buy a separate mike for the camera.  The internal microphone pick up all the camera noises.  The best way is to set the focus and switch off automatic focusing, but that only works for subjects that are not moving too much, and when the camera is on a tripod.  Anyway, here is one of the movies I shot.  Click on the pictures to go to the SmugMug album and see more pictures and the other movie.

Here is another decent picture.

Aside the fauna, the bay itself offered interesting views and opportunities for photographs.  For one thing, we had the pier heading off into the bay.  I’m guessing about 150 yards long.

It was overcast and rainy when we arrived, and it gave the place a kind of ethereal look.  That was the only day it rained.  The rest of the time it was hot and humid.

I typically shot from the deck of the house.

What?  You can’t see the deck?  Here is a better view. 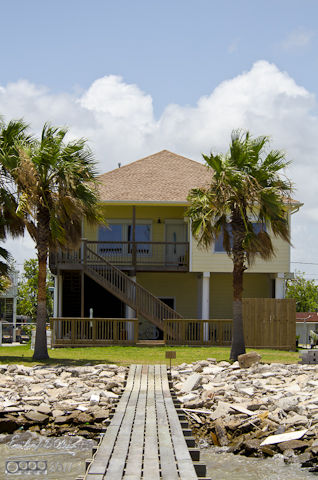 Like most of the other homes along this stretch of the bay, the house is only a few years old.  Hurricane Ike wiped out all the homes in this this neighborhood.  Most of the people are still finishing up the rebuilding process.

This next shot is included so viewers can see the result of the pelicans cruising up and down the shoreline.  Look at the siding of the house.  Peppered by pelican poop; people don’t even bother cleaning it any more.  Everything under the flight path gets nailed.  Another reason to stay on the deck.

You might not be able to see it well on this small picture.  Click on it for the SmugMug album and higher resolution pictures.

The other thing I enjoyed was watching big ocean-going freighters come and go.

I used to enjoy watching freighters go up and down the St. Lawrence Seaway.  Sitting on the deck of our cabin on the shore of Lake Huron, sipping a coffee, the world hundreds of miles away.

This one not so much, but I still enjoyed the ships, and yes, I was drinking coffee despite the 100+ temperature and 70%+ humidity.

One interesting thing.  I would leave the camera equipment outside because otherwise the change from the air conditioned house to the outdoor heat and humidity would cause the camera lenses to fog up, and it would take a long while to clear up.

Bottom line I like the water, be it ocean or lake.  But, I’m not big on living on the potential path of a hurricane.  But it’s nice to visit.

iThere are no comments