Note: WordPress lost the links again (annoying that) so here’s the direct link to the gallery with all 193 photos:
https://ejdalise.smugmug.com/Aeroplanes/Thunderbirds-2011

On the 25 of May, we packed a few snacks and went to one of many overlooks to the Air Force Academy Grounds.  The overlook afforded a clear view of almost all the grounds, but especially the area from Falcons Stadium to the North Entrance. 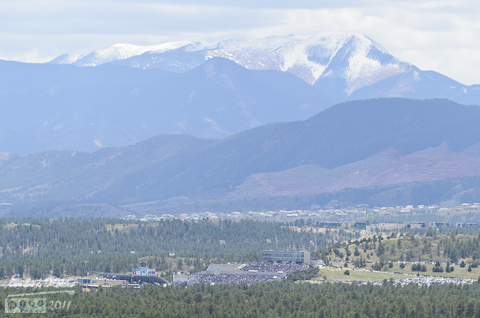 Well, I will tell you.  The graduation ceremonies start at 12:00 noon and the Thunderbirds are scheduled to do their thing between 12:30pm and 1:00pm.  Except, there is usually some important personage speaking, presumably imparting sage advice to the graduating class.  Something like “Better stay in the military, because there be no jobs in the private sector.”

Unfortunately, it usually takes important people much longer than most people to say simple stuff like that.  They are important, you see, so they need to make sure people know they are important.  They do that by talking well past their allotted time.

So, we sit in the car and wait.  And eat.  And drink coffee.  And then they arrive.

Yup, it’s a video.  Mind you, it’s not a good video, but hey, I’m still in the infancy of what one day will be looked back upon as a brilliant career in video making . . . shooting . . . er . . . taking.  Anyway, there are a few more videos dispersed in between the pictures I did take.

As usual, for the pictures, you can click on any of them to be taken to the SmugMug album.  Be aware there are a lot of pictures.  Many are slight variations on each other, and while I might make a more select album, for now, I’m showing all the pictures that are pretty good.  Some are not as sharp as I like, but passable.

I also created a slideshow for them who be time-challenged, or just plain bored by static pictures.  This has got music and everything!  And it’s under four minutes.

What it does is give you an idea of the pictures you can find in SmugMug.  Meanwhile, lest your attention wonders, here’s another video (and it’s not even the best) of the Thunderbirds flying over the stadium.

Before I get to the last two videos, here are a series of pictures.  As always, the pictures in SmugMug are of better quality.

OK.  Here are the last two videos.  The first is of one of the planes doing a semi-stall flyover and then shooting up into the sky.

The last one I like, but I was not prepared for them flying directly overhead.  The camera was mounted on a tripod, and I could not swing it directly overhead and keep my eye on the screen (can’t look through the eyepiece while shooting video).

That’s the reason I also messed up a few other videos that would have been very nice . . . you can’t really see the screen very well when it’s moderately light out, so I was guessing as to where the action was, and the two I messed up ended up being out of focus and mostly out of frame.  I’ll have to figure out something that I can use (there are some after-market things, but I don’t know how usable or useful they are).

Anyway, here it is.  My best video . . . but I still think the pictures a better.