I joined the “connected” set.  Technically I’ve had a “smart”phone for many years;  a Palm Centro for the past three years, Palm Treo before that, and something I don’t remember before that.  But none of those phones required the purchase of a data plan, and I preferred my smart phones dumb.

But the phone companies learned, and got smart themselves.  “You can’t have a Smartphone without also buying a data plan” they said.  I pleaded, cried, yelled, and held my breath until I was . . . well, out of breath, but it was all to no avail.  With my trusty Centro beginning to act up, I was left with no choice but to become one of “them”, the people constantly linked to the rest of the world.

Sure, I could have bought a regular phone, but that means I would have needed something else to ferry around the volumes of information I typically carry with me.  No.  Smartphone, and accompanying Data Plan, it had to be.

My selection process involved doing a lot of research.  I briefly considered the iPhone, but since I have an iTouch that quickly fell by the wayside, despite the hype surrounding the announcement of the iPhone 4 and its availability through Verizon.  It was enough I was going to be one of “them”; no way was I going to become one of “THEM”.

I finally settled on the Droid X.  I briefly considered the Thunderbolt, but many moons ago I learned never to buy something new, hyped, and untried.  Neat commercials for it, though.

I have to admit I like having the whole world at my disposal wherever the answer to “can you hear me now?” is “yes”.

Actually, that is one of the pleasant surprises; I get receptions in places I never used to.  For instance, I get three bars in the locker room at Lynmar, the club where I play racquetball.

I don’t know if antenna technology improved that much, or if my Centro just sucked at being a phone, but in Lynmar’s basement, with multiple layers of walls between me and the outside world, I can now carry on a conversation for the sole purpose of annoying those around me.  Much like they do all the time.

The voice quality is good, the screen is large enough for an adequate web-surfing experience, the phone is packed with features, the apps work well, and overall I am glad I made the choice.

It has a 8MP camera that is not too shabby.  Not fantastic, but very usable, as evidenced by the following.

Not too impressed with panoramic stuff (although this was a gray, dreary day):

You can play around with the free Photoshop app, and get it more presentable:

But the close-up stuff looks good.  This is taken after dinner as I was exploring the phone’s features. 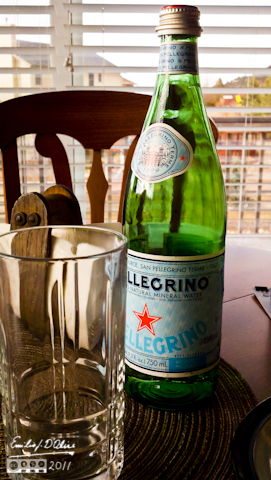 Here are a couple from around the house.  First as-shot, and then converted to B&W. 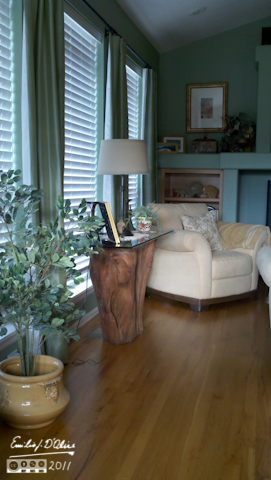 The actual photos are all much larger than  these, and probably look a little better than these converted JPGs.

Finally, I am using Swype (http://swypeinc.com/product.html).  Very clever, impressive, and it makes these devices much more usable as writing tools.  the lack of a keyboard is the main reason I never considered Smartphones or tablets as serious productivity tools.

No more.  I may have to consider one of the many non-Apple pad offerings out there as potential portable writing platforms.  But not just yet; small steps, and only one at the time.

iThere are no comments