Posted on 21November2010 by disperser 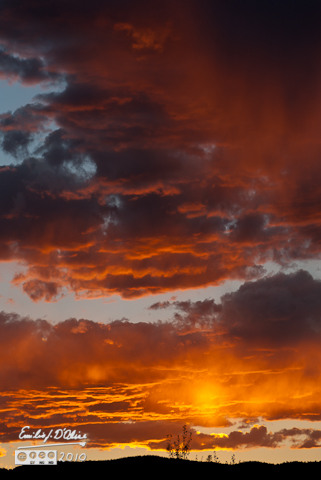 This small gallery (click on either of these two pictures to go to the September 2010 SmugMug album) shows the shots taken of a beautiful sunset back in the middle of September.  These were taken from my deck, looking over the neighbors and toward the Front Range mountains.

The only thing I do to pictures of sunsets is mute the colors a bit, basically trying to bring out the details washed out by the very bright edges.

From my deck I cannot easily do panoramas without including my neighbor’s houses, and even then I would have to shoot up at a 20-25 degrees angle.

Not ideal for showing panoramas.

On the other hand, this past week, Nov. 17th, I was driving home on County Line Rd, and I stopped to take the following series. (again, click on any of these pictures to go to the November 17th sunset SmugMug gallery)

Here it’s wide open , and the area offers plenty of opportunities for multiple shots one can stitch together.

At first that was not my plan, as the actual sunset was not as interesting as the formation above and to the left, looking NNW.

The view West was too bright, and not enough features showed to make it interesting.

But, as with all things in life, one has to be patient and opportunities sometime present themselves.

As the sun continued to set, the formation to the north extinguished into a charcoal colored cloud, almost as if the sunset had burnt it so nothing but cinders remained.  And then the sunset proper made an appearance.  The following panorama is made up of five shots spanning about a 45 degree arc along the Front Range.

Clicking on any of the three pictures above will take you to the SmugMug gallery for the November 17th sunset.  The pictures at SmugMug are much batter than what is shown here.

And finally, the most amazing sunrise I have ever seen.  Friday, November 19th, 2010.  I had just gotten into Woodland Park and decided to get some gas.  Understand I drive  approximately WNW heading up Hwy-24 toward Woodland Park.  Plus, I am in a pass, with large hills on both sides. 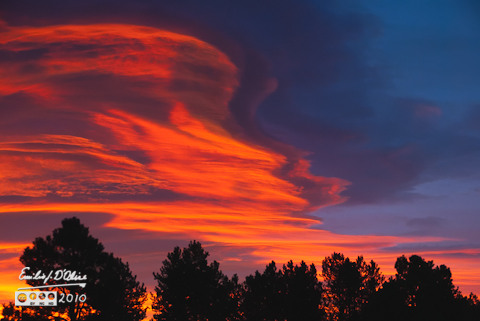 I was already past the gas station when I decided to go back and get gas.  I do a u-turn, and I literally gasp.  The picture above is about 10-12 minutes after that moment.  I did not take any pictures while I was at the gas station because it was just too dark.

The above cloud was smaller, but a deep maroon as the sunlight was beginning to light it up.  I could not get my eyes off of it as it changed in hue, swirled, elongated, and all the while I was cursing not having my tripod with me (to help me take a longer exposure so I could capture this wonder).

I had to go in to get my receipt, and I told the clerk to walk out.  She did, and almost ruined the moment for me.  “How can anyone look at that and think there is no God?” she asked me.  I almost went into a dissertation, but thought better of it; she got what she wanted/needed out of the sight, and while she unknowingly nearly spoiled my enjoyment of it, I was not going to knowingly spoil hers.  I grunted and left.

But she was wrong . . . there was a sign in that cloud, that fiery spectacle.  She just needed to wait a few minutes . . . the following are three panoramas taken a few minutes apart.

Please, if you hit on no other gallery, click on the one for the sunrise.  I am still awed by the memory of it.  I don’t know if anyone has ever seen anything like this, but I know I have not, and I feel lucky to have been in the right place, right time, to experience it.  Thank you Dog.

13 Responses to Two great sunsets, and a spectacular sunrise